CakeWalk: Celebrate your Fourth of July with one of America’s favorite treats 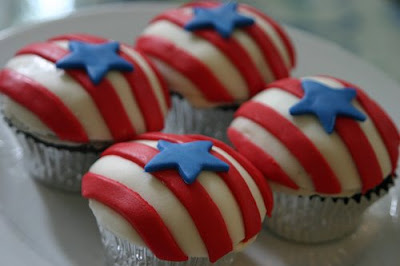 
The Fourth of July is one of my favorite holidays. Independence Day, for me has always represented, the quintessential summer afternoon/evening with friends and family, full of swimming pools, fireworks, and best of all, amazing food. As a kid, every year my mom would make homemade vanilla cream, sometimes throwing in some delicious fresh peaches for a little kick. I have vivid memories of hovering over the ice cream maker in the garage waiting for the gadget to run its course so I could indulge in my favorite summertime treat. Plus, my mom earned the badge for “Coolest Mom in the World” because for the week following Independence Day, she allowed us to eat as much ice cream as our stomachs could manage. This even included for breakfast. This was back in the day when my metabolism was a freak of nature – I could have eaten an entire horse and not gained a single pound, something that is incomprehensible today.

As an adult, themed cocktails have replaced the homemade ice cream, but the tradition of delicious food at outdoor barbeques continues. Luckily for me, I’ve managed to become friends with some fine cooks.

I’ve discovered that the key to any great party food is size. Finger food is best, as utensils require acrobatics involving balancing a drink, a plate and possibly a sparkler. With this in mind, can anyone think of a better party treat to celebrate the Fourth of July with than the all-American cupcake? As mentioned in last week’s column, the cupcake has become an American icon in the dessert realm, so it only seems appropriate that our little frosting topped friend make an appearance at one of the biggest parties of the year.

Luckily, Fourth of July cupcake options are endless. Whether you choose a festive cupcake wrapper or decorative topping, it’s all about making the cupcakes appropriate for the party you are attending. 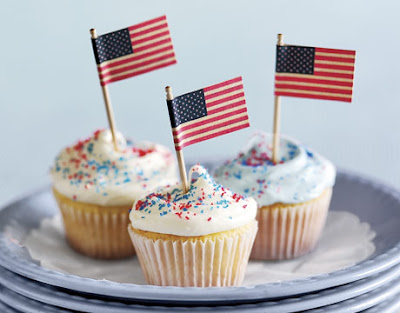 For instance, if your party is a bit more upscale, Martha Stewart offers some terrific ideas such as substituting blueberries and strawberries for sprinkles, two naturally festive fruits because of their patriotic colors. 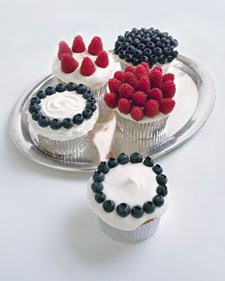 Festive colored fruit can be substituted for sprinkles if attending a more upscale barbeque (Photo courtesy of MarthaStewart.com)

If your soiree is more family oriented, kids will appreciate festive sprinkles and cupcake toppers such as edible stars. Stores such as Sur La Table and Williams-Sonoma carry seasonal decorating tools such as Fourth of July sprinkle kits. 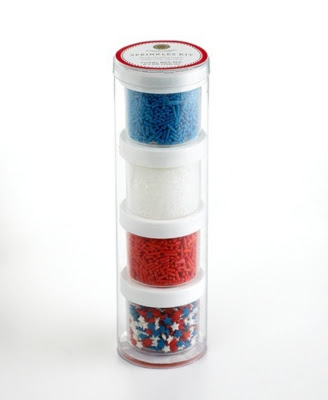 For those of you who really want to amp up the red, white and blue theme, why not make a red velvet cake as the base? With a dollop of buttercream on top and perhaps an American flag topper, you might as well be Uncle Sam! If you want to give your partygoers a bit of a surprise, make a red, white and blue cake base (recipe below).

For the barbeque I’ll be attending, I’ll be bringing vanilla cupcakes with vanilla buttercream icing. For decoration, I’ll be mixing it up with flag toppers and patriotic sprinkles because even though there won’t be any kids at this party, there will be plenty of adults that think they are 10 years old.

Regardless of age, you’ll find that cupcakes are a welcome addition to any Fourth of July party. I hope this week’s column inspires you to make your own Independence Day cupcakes so you’ll learn that preparing festival party treats is as simple as a cakewalk.


How do YOU decorate your Fourth of July cupcakes? If you send in your photos, I’ll be sure to update this post with your creative designs! Contact me at mary_ann_porch@hotmail.com.

Fill paper-lined muffin tins with 2 tablespoons red batter, 2 tablespoons plain batter, and 2 tablespoons blue batter. Do not swirl batter i.e. leave it layered. Bake at 350º for 20-24 minutes or until a toothpick inserted in a cupcake comes out clean. Cool 10 minutes in pan and then remove cupcakes to a wire rack to cool completely. Frost with vanilla frosting and decorate with sprinkles. 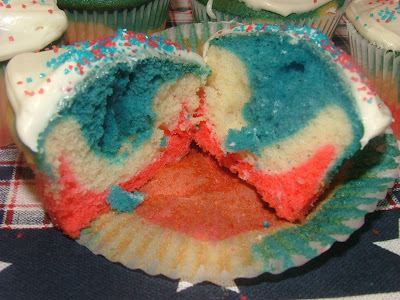 (Recipe and photo courtesy of A Recipe a Day)


Mary Ann is the founder of the New York City chapter of CupcakeCamp NYC, an ad-hoc gathering born from the desire for people to share and eat cupcakes in an open environment. She is also the founder of Puff and Choux, a blog dedicated to the pastry and dessert arts. You can contact her at mary_ann_porch@hotmail.com with any questions, ideas or just to chit chat. You can also follow her on Twitter at @MaryAPorch.
American flag CakeWalk cupcake holidays festive Fourth of July holidays Independence Day Martha Stewart Mary Ann Porch party summer

The Sweet Lady said…
These are all so cute. I have been reading your blog for months and have finally set mine up. I am so excited to be able to follow you and be able to comment now
7/03/2009 4:57 PM

Nicole Feliciano said…
Love these cupcakes for the 4th. We’re planning on grilling up a storm this weekend. I just posted a recipe share link on my site. Hope you’ll stop by and add a favorite: