CakeWalk: Even Betty Crocker might have listened to Metallica… 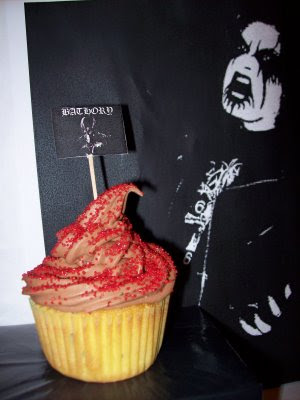 June Cleaver doesn't reside in every American kitchen...unless you are talking about a woman named June that might wield a cleaver... (Photo courtesy of Kathy Bejma, Metalcakes)


CakeWalk is a weekly column by Mary Ann Porch dedicated to every baker who has ever struggled to achieve the right consistency with their icing, unsuccessfully searched for the perfect cupcake topper or just wants to learn something new. Because with a few helpful tips, cupcakes are a cakewalk.


Occasionally, I work a day or two at the Lower East Side Tenement Museum in New York in effort to pick up some extra cash. The plus side besides the extra money in my wallet is that the museum is in the same neighborhood as sugar Sweet sunshine, my all-time favorite cupcakery. So, whenever I work at the Tenement Museum, I like to swing by sugar Sweet sunshine during my lunch break and pick up cupcakes for my coworkers. I’ve learned a lot about the history of New York immigrants while working at the museum, but I’ve also learned that museum folk really like surprise cupcakes.

Last week while munching on some goodies from sugar Sweet sunshine, my colleague Karolina mentioned one of her new favorite blogs - Metalcakes. Written by Kathy Bejma of Chicago, the blog features one-of-a-kind cupcake recipes which are all based off of heavy metal songs. Describing her recipes' ingredients at Metal Constituents and her baking method for each cupcake as Merciless Instructions, you'll definitely feel the inclination to break out your Black Sabbath teeshirt you probably have hidden in your pajama drawer while whipping up these cupcakes. 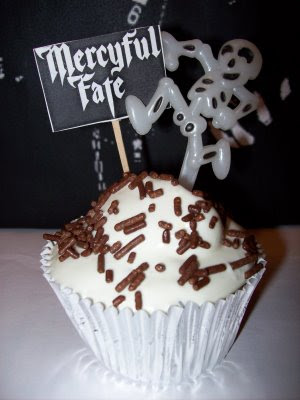 Recent concoctions include cupcakes inspired by bands such as Mercyful Fate, Bathory, and Graves at Sea. 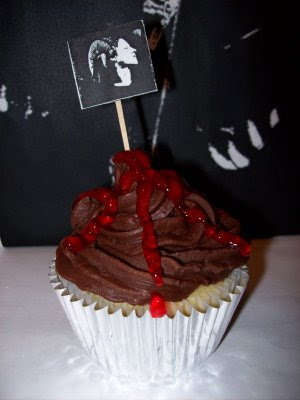 The Black Bile Cakes were inspired by the band Graves at Sea (Photo courtesy of Kathy Bejma, Metalcakes)

Kathy even designs recipes for our four-legged friends, such as the Metallica-themed Master of Pupcakes, which feature details like little pieces of dog food, mini bones, or Snausages.

It’s safe to say, that in my opinion, Kathy is revolutionizing the cupcake/music industry hybrid. Not only does each of her recipes play homage to a different metal band every week, she manages to make each cupcake sound amazing. Even the Black Bile Cakes sound mouth watering delicious, at least once you get past the use of the world “bile,” which is actually pastry cream tinted with black food coloring. 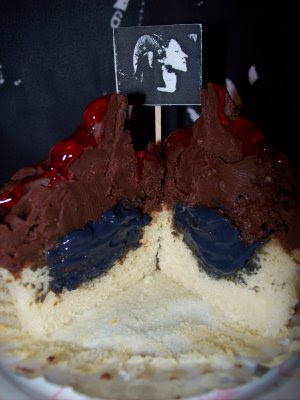 Kathy is part of a growing sub-group of alternative bakers who are taking baking in a different direction. Gone are the days of the coifed, flowered apron-clad housewife with a pan of cupcakes waiting for the kids when they come home from school. This new crop of cupcake baking aficionados are adding a special flare to the iconic baked good by injecting a bit of personality. Metalcakes, along with sites such as Cupcake Rehab and Rock 'n Rollin Pins, are welcoming a new rowdy and tattooed crowd of cupcake lovers into the fold.

Metal might not be your music of choice, but I bet you would be hard pressed to find a man or moody teenager who wouldn’t think you were the patron saint of the kitchen if you whipped up one of Kathy’s recipes for their next birthday. Not only has she found a way to combine two of her interests, she’s done so in a creative, never-seen-before way. I applaud Kathy for taking the normally frilly, pink personality of the cupcake and morphing it into a guitar lovin’, head bangin’ rock star. Change never hurt anyone, and it’s about time the cupcake had a bit of a butch makeover.


Mary Ann is the founder of the New York City chapter of CupcakeCamp NYC, an ad-hoc gathering born from the desire for people to share and eat cupcakes in an open environment. She is also the founder of Puff and Choux, a blog dedicated to the pastry and dessert arts. You can contact her at mary_ann_porch@hotmail.com with any questions, ideas or just to chit chat. You can also follow her on Twitter at @MaryAPorch.
alternative bakers blog Blogging and Cupcakes CakeWalk Chicago heavy metal Mary Ann Porch music and cupcakes