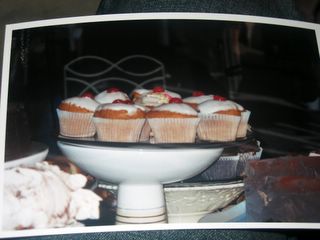 Silly Ellen, cupcakes are meant for everyone.

jessicararebit said…
The original fairy cakes named by us British are because of a certain way they are decorated. When the cake is ready to be iced we scoop out the top with a spoon. Not a deep scoop but making sure this disc of sponge is kept in one piece and put it to the side. Fill the scoopy-out part with fluffy butter icing. Then cut the spare circle of cake in half and squidge the pieces into the icing at an angle, opposite each other. Thus creating a little pair of fairy wings on your cake...then sprinkle with a little icing sugar oops, I mean fairy dust!
6/10/2005 11:16 AM

Anonymous said…
Hi. The cake Jessica rarebit is describing is actually a butterfly cake. I wonder whether we British call them fairy cakes because of their small size and light texture. I'm British and I'm still in the dark - is this a British recipe or have we nicked the idea from another country?
8/20/2005 11:37 PM

Anonymous said…
I really think that isn't a origianl british recipe, i think like the anonymouse say that we have nicked the idea from another country!. :P lol
11/21/2005 5:41 PM

Anonymous said…
Fairy Cakes are much lighter in texture than a traditional U.S. cupcake. If you look at a fairy cake recipe, you'll see why. The batter itself is more of a genoise than a regular cake batter. Otherwise, a Fairy Cake is just a British word for cupcake.
5/28/2007 1:00 PM

Anonymous said…
The statement "Fairy Cakes are much lighter in texture than a traditional US cupcake" is enough of a generalization that it's misleading, I think. While it may be true that British fairy cakes are of a particular batter, such as a genoise, there is no standard cake type for a cupcake - the term refers to the size and shape and the fact that it's baked in those pans. People bake all kinds of batter in them, including genoise, and even mixes have different textures according to brand.

Perhaps it's simply that cupcakes are more diverse than fairy cakes. I've baked a variety myself, from red velvet cupcakes to what we in the US would call 'angel food' cupcakes. These are very light indeed.
2/25/2008 1:09 PM

Unknown said…
I remember fairy cakes haing bits of maraschino cherries through them, i think it may have been a mix
4/19/2008 11:13 PM

Anonymous said…
who cares about cup cakes and fairy cakes and whether there brittish or american we ALL know its the food fronm ireland thats the best good irish grub spuds and gravy and hot scones
8/23/2008 5:05 AM

marko mizell said…
"they're British" not "there briTTish".

michael james said…
Cup cakes are simply another manifestation of American cultural imperialism. We in the UK still remember having to change from Ulay to Olay, from Marathon to Snickers and seeing our beloved Muffins turned into some obese version of your cup cake naked, shorn of decoration and sold in franchised coffee shops. It is nothing less than horrific. Remember your cup cakes are Fairy Cake heresies. Ours was the original recipe and name, we are proud of both. Your culture has debased the word fairy into an anti gay insult which is why those repressed jocks in the marketing industry cannot abide to use the term Fairy as in Fairy cakes. Get over it ladies.
9/19/2010 3:12 PM

Unknown said…
Perfect perfect recipe followed to the letter and it was successful, thank you again for this great recipe :)
Super easy and super good recipe. I do and redo this recipe often is délicieuse..jais for a site like thisfree online cookbooks recipe
12/29/2014 6:48 AM