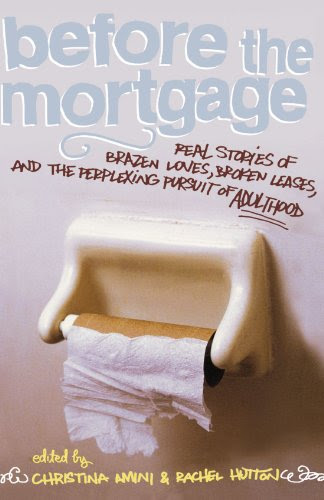 I got to meet Christina Amini and Rachel Hutton on their book tour for their wonderful anthology Before the Mortgage and when I heard they'd had cupcakes at their book release party, I knew I had to interview them.

I heard you had homemade cupcakes at a reading for your book Before the Mortgage. What kind of cupcakes were they and who made them? Why were they special to you?

Christina’s mom made the cupcakes (Duncan Hines chocolate with vanilla frosting) for the post-reading party in San Francisco. She decorated them with those little sugar letters you use to spell out words on birthday cakes—and even went to two different grocery stores to find the right kind. Each cupcake had its own letter, spelling out “HAPPY BIRTHDAY BEFORE THE MORTGAGE.”

Are homemade cupcakes better than storebought? What other special cupcakes have you made or have had made for you? How often do you eat cupcakes?

Homemade, hands down! They can be personalized for every event. For example, Christina once made modernist cupcakes (white cupcakes with white frosting served on a white square platter) for her girlfriend’s architecture class. Rachel saves cupcakes for special occasions, indulging only a few times a year, but Christina makes them at least once a month.

The cute factor. The single-serving size. Licking the frosting off first. No dishes to clean.

Christina is basically a sucker for anything cute, so cupcakes always win. Rachel doesn’t eat cake from a box mix, except if it’s in cupcake form.

Christina remembers her sister smooshing a cupcake on her face at an early age . . . or maybe it was Christina who did the smooshing . . .

Last Christmas, Christina made cupcakes with molten chocolate in the middle. They were ready right before dinner, so they had to be eaten first, before they cooled off.