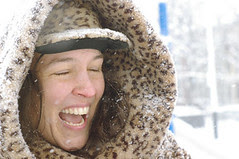 How often do you eat cupcakes?
Primarily when my friend, Uncle Stephen, comes over for dinner. He lives around the corner from Magnolia Bakery and nine times out of ten he arrives with a little white cardboard bakery box, tied up with string. Factor in all the kids' birthday parties I attend and I'd say my annual average hovers somewhere around 30.

What's the best thing about eating cupcakes?
The frosting, unless the frosting is that head-ache inducing shortening-y kind, in which case, the cake. The worst part is the appearance of the fluted paper holder after you've removed it. Why do we have to look at those ugly things while we eat our cupcakes?

How do cupcakes compare/contrast to other baked goods for you?
They're sort of the silly, frilly bonnets of the bakery world. Like, you're never going to see a cupcake on the dessert menu of some sleek new restaurant where a tiny plate of Mesculun greens goes for 8 bucks. Or, what do I know – I hardly ever eat in places like that – maybe you will, but only if its inclusion is ironic and kind of smirkingly whimsical. Cupcakes were never a staple of Eastern European peasantry, like black bread or ...well, kasha's not a baked good, I guess. They're not French. They're not Ding Dongs. They're not for breakfast. They don't have the pioneer integrity of a fruit pie. Their reign as a children's birthday party food hurts their chances of being taken seriously.

Is there any innovation you'd like to see made to the cupcake that would improve it for you?
As a child, I was always fascinated by stories in which some jolly family was dividing up a special ethnic holiday treat and all the kids were on tenterhooks waiting to see whose piece would contain the ring or the penny or some other non-edible token that would bestow either good luck or the rights to a better, non-baked-in-anything present. This fascination was compounded by my father's tales of an elderly, unmarried lady who had known him since he was a child in Cairo, Illinois and every year, without fail, sent him a gingerbread boy with a dime baked into its belly. I witnessed this miracle with my own eyes. He was a 45-year-old banker and right on schedule, here came this ten-cent gingerbread boy from Cairo, Illinois. I wish I could remember that thoughtful lady's name. It always struck me as strange that she didn't transfer the tradition to Daddy's child, when he became a father. She only had eyes for Reed, apparently.

I have sampled cupcakes from the lousy to the superlative, but I have never bitten into one and chipped my tooth on a dime. Not that the cupcake experience needs amping up, but I think it would be kind of fun if there was at least a chance of finding a prize inside. Like maybe an old Monopoly piece or a wingnut or something.

Do you bake your own cupcakes? Or (even better) have someone who bakes them for you?
Like many American mothers, I bake them for my children to take to school on or around their birthdays, and sometimes for bake sales. I favor the black bottoms, but once, a cashier at Stop 'n Shop in Orleans, MA told me how she had baked cake batter in flat-bottomed ice cream cones for her six-year-old daughter's birthday and they had been the biggest hit of the day. Naturally, I sought to replicate her success and claim it as my own, but I made the mistake of preparing them the night before the bake sale. All these kids were like, "Ooh, the cone's all mushy! Can I trade this for a brownie?"

What's your first cupcake-related memory?
Staring at them through the glass case of Rosy Roslyn Bakery in Indianapolis. They were frosted these not very appetizing shades and each one had a scary plastic clown head toothpick jammed into it.

What's the most fun you've ever had with a cupcake?
My high school art teacher was this great guy named Barow Davidian, and all the preppies thought he was a weirdo, but we weirdos loved him and he let us hang around the art room on our free periods. Well, god knows what we were raising money for, but under his leadership, those of us who spent all our unscheduled time in the art room planned a bake sale where all the goodies would be fake. We "baked" like crazy for two weeks or so. Plaster of Paris was our primary ingredient. The day of the bake sale coincided with this annual tradition where students brought their dads to school. I was manning the table, when this very nice older father in a suit and tie bought a "cupcake" my friend Angela had made and to my great astonishment, popped it blithely into his mouth. Wait, actually, now that I think about it, it must have been a "bourbon ball", but her cupcakes looked pretty realistic too. I used one as a paperweight for many years thereafter.