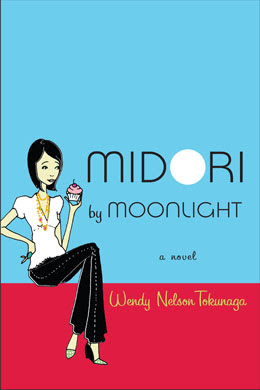 The cupcake's small but it's there - this is from Wendy Tokunaga's forthcoming novel Midori by Moonlight. I'm also told that cupcakes are part of the plotline - more info to come closer to the book's publication date in September. Here's some more information, and part of the blurb about it:

Thirty-year-old Midori Saito’s dreams are all about to come true. A strong independent streak has always made her feel like a stranger in a strange land in her native Japan, but now she’s embarking on a new life in San Francisco. She’s about to marry Kevin, the perfect American man—six feet tall, with curly hair the color of marmalade. Unlike a Japanese guy who’d demand she be a housewife, Kevin doesn’t mind if Midori follows her dream of becoming a master pastry chef. Her life is turning out as exquisitely as a Caramelized Apple Tart with Crème Fraiche, until Kevin dumps her at their engagement party in favor of his blonde, ex-fiancée, whom Midori never even knew existed.
cupcakes on book covers