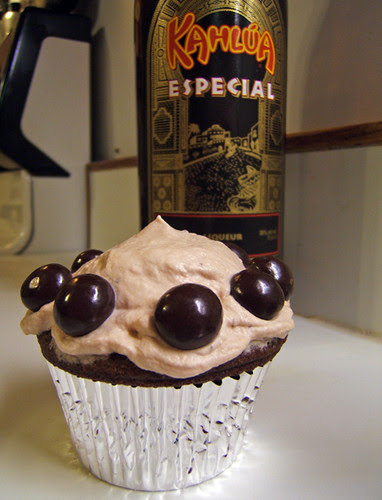 How to Eat a Cupcake has the recipe and says:

t basically consisted of melted white chocolate, butter, and confectioners sugar, which just seemed way too sweet and rich to go along with a Kahlúa and Cream cupcake. I made a chocolate Kahlúa whipped cream. It compliments the Kahlúa and chocolate flavors in the cupcake perfectly (and actually adds the "cream" of "Kahlúa and Cream"). I decorated one similar to the coffee cupcake on the front of the book for photographing purposes only. The rest are adorned with chocolate K's and martini glasses.

On her blog, you can also vote for which cupcake she'll make next:

How To Eat A Cupcake said…
thank ladies for the post!