Are cupcakes "feminine and girlie?" 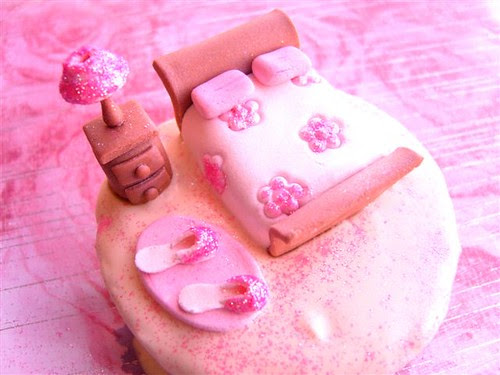 So, in the New York Times article (which is inching up their Most Read list, currently at #4), I said that cupcakes are "feminine and girlie," and got called to task for that.

We've been through this issue before, and I just wanted to clarify that I was not trying to imply that cupcakes are only for women, but more that both the shape/size and the often pastel/pink colors are what we've come to associate with "girlie," as well as the fact that the vast majority of readers of this blog, as far as we can ell without any formal study, posters on our Flickr pool, and bakery owners, are women. Not all, of course, and obviously men like cupcakes too, and there are people like Johnny Cupcakes and Warren Brown and Andy Samberg and Andi Bell (Cupcake Beach) and James Gray (Dozen) and Jason Bauer (Crumbs) contributing to cupcake culture.

But I think it would be impossible to deny that the people driving this current cupcake trend/craze/interest/what-have-you, from cupcake merchandise to actually opening cupcakes businesses, are largely women. As for consumers, I'd imagine that it's fairly evenly split along gender lines, but I'd love to hear from some bakery owners as to whether this is a factor at all.

What do you all think: Are cupcakes "feminine and girlie" or is that me anthropomorphizing? Or do you not care at all and simply want more pretty pictures? :)
cupcakes in pop culture

Paula said…
Well, they *can* be girlie, but the Yummy cupcakes we had were not that feminine looking. My husband and two boys (friends of my daughter) liked them a bunch. But would guys seek out cupcakes for themselves? Probably not! A smart single guy might join one of the cupcake meet-ups to hang out with all the wonderful cupcake gals though. :)
9/25/2007 9:31 AM