There's also a story on Kickass Cupcakes in The Boston Globe today. Also be sure to go to their site and click on "Adventures of Kickass Cupcake" for some animated cupcake fun.

Location: Boston, MA (Davis Square, Somerville, a neighborhood just north of Boston, near Tufts University, and not too far from Harvard also)

What inspired you to open Kickass Cupcakes? When did you get the idea and why did you choose the location you're in?

My hub and I recently moved to Boston from Santa Monica, CA, where there must be at least half a dozen cupcake bakeries now. There are tons of cupcake bakeries, it seems, everywhere but here in Boston. Boston needed the cupcake love. And the name seemed a perfect fit for the edgy hip vibe of the neighborhood.

Why did you decide to focus exclusively on cupcakes as opposed to other baked goods?

You know what they say about one of the keys to success in opening a business…pick one thing to do and just do it really really good!

Why do you think cupcakes have seen such a rise in popularity in recent years?

Even just saying the word cupcake makes you smile...cupcakes are the perfect dessert, small indulgences you can eat without feeling guilty or overstuffed (unless you eat 5 or 6!)

How long have you been baking cupcakes? Where did you get the inspiration for the flavors you're offering?

I remember baking cupcakes in grade school with my mom to take to class for my birthday.

As for the flavors, I think I have learned so much from working with great chefs who have shared their secrets with me on how to bake with love and make food taste just as good as it looks.

How'd you come up with the name Kickass Cupcakes? What makes your cupcakes so kickass?

That’s what you say when you eat the cupcakes, “damn, these cupcakes kickass!” As for what makes your cupcakes so kickass, We are artisanal bakers…we bake from scratch every day in small batches, and use only the best all natural ingredients-no hydrogenated oils, no trans fats, no artificial flavors or preservatives. And it’s all about the butter, baby! It’s the yellow brick road to cupcake happiness. I use Plugra butter exclusively for everything.

How did your opening day event go?

Opening day was a blast. Construction took a lot longer than we planned and the “open soon – Kick*ss Cupcakes sign” had teased the neighborhood all summer long, so people were excited to see us finally open. 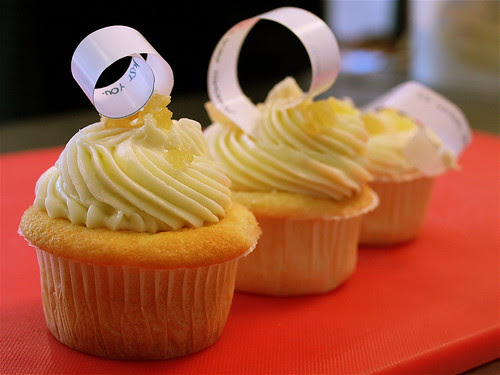 How is business treating you so far?

Just trying to keep up with the demand for cupcakes for happy happy cupcake people.

You'll soon be hosting various events such as cupcake happy hours, decorating classes for kids, pajama brunches and tastings. When will those start and what else can you tell us about them?

Coming soon. Decorating classes will be all about kids and frosting, a messy and fun combination. Pajama brunche⎯show up during brunch hours in your PJ’s and get half off on your cupcakes. Tastings, I plan to join forces with some local chefs, wine connoisseurs and chocolate artists for some terrifalicious events. Happy hour, discount cupcakes from 5-6 during the week.

One of the other special things about your bakery are the specialty items you offer, including cupcake shooters, cupcake crisps, and deep fried cupcakes. Can you tell us more about them?

Let's take these one at a time: What are the shooters? One gulp cups of specially crafted beverages to down with your cupcake. Right now, we have a vanilla bean infused fresh from the local dairy milk, almond lassi, a yogurt drink flavored with subtle flavors of almond and orange flower water, and an organic yerba mate tea served iced.

Are they meant to be drank with or before or after a cupcake?

I like to down the cupcake and then drink…licking sugar off your arm with your shot is highly recommended.

Can you tell us more on the cupcake crisps?

Cupcake Crisps are twice baked cupcakes that are crunchy like a cookie or biscotti. We dip them in chocolate and cover them with all sorts of goodies, like cashews and almonds, sprinkles, coconut, m&ms.

I thought if you can deep fry a Twinkie, why not a cupcake?

How did you come up with this idea and how does it work?

It’s a cream stuffed vanilla cupcake that is dipped in sweet batter and deep fried to order. It's drizzled with chocolate sauce and served in a paper conical cup.

You also sell pupcakes and kittycakes for dogs and cats. What are the ingredients and how and why are they different?

These are actually okay for human consumption, but we don't recommend, since they are not as luscious as our people cupcakes. The Pupcakes look like chocolate treats but are made with carob, a chocolate substitute safe for the woofs. They are topped with a dollop of all natural peanut butter and a teeny dog biscuit ( the real kicker as to why we do not recommend them for people). The Kittycakes are like cheesepuffs, made with flour, eggs, lots of cheese and have a Pepperidge Farm goldfish cracker baked into the top. 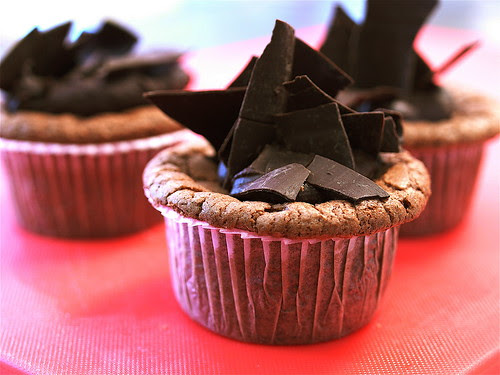 What's the best part of running your own bakery?

All the creative freedom…especially in coming up with new flavors of cupcakes.

And now for some personal questions…

Tasting, tasting, constantly tasting…the quality control part of this job is really a drag – not!

A little boring, I know. I always go back to vanilla cake with chocolate frosting. I think it’s the most classic and perfect combination of flavors. And the banana cream cupcake is my favorite special indulgence…this is a vanilla cupcake stuffed with vanilla custard and bananas, topped with a pillowy mound of fresh whipped cream and garnished with crushed graham crackers.

Even though I love cupcakes, I have a wicked sweet tooth, so I love all sweets equally. And candy! And ice cream! MMMMM!!!

How about a Willy Wonka style Everlasting Cupcake? That would be the ultimate cupcake⎯no matter how many bites you take, you still have a delicious cupcake in your hand.

I started off doing it all by myself, but it’s been so busy that I’m now hiring a staff to help bake.

Not sure if this counts as a cupcake, but as a tiny tot in the shopping cart, gleefully squishing a pack of Hostess Ho Hos.

My cupcakes are not traditional cupcakes…they don’t look or taste like cupcakes from your neighborhood bakery, and they are definitely artisanal. I like to think of each one as a little treasure…a kickass treasure that tastes as good as it looks!
Boston cucpake crisps cupcake bakeries cupcake flavors cupcake interview Kickass Cupcakes Massachusetts pupcakes Sara Ross Somerville

Anonymous said…
Unfortunately, I drove 25 minutes from Dorchester to try their cupcakes & they were rather greasy but at the same time dry. Which I find hard to accomplish. Maybe overbeating or overbaking. Oh & too sweet & the frosting is greasy. Another oddity.
5/22/2008 2:41 PM