Cupcake interview and recipe from Kaye and Liv Hansen, authors of Little Cakes from the Whimsical Bakehouse

Posted by Rachel on February 22, 2008
Today we've got a combo cupcake interview and recipe for you! And do check out the absolutely adorable Little Cakes from the Whimsical Bakehouse by my interviewees Kay Hansen and Liz Hansen. It's got lots of specific baking and decorating tips as well as fun recipes like the make a wish cupcakes on the cover to piping instructions for cupcake flowers, from sunflowers to dahlias to gerbera daisies and roses. 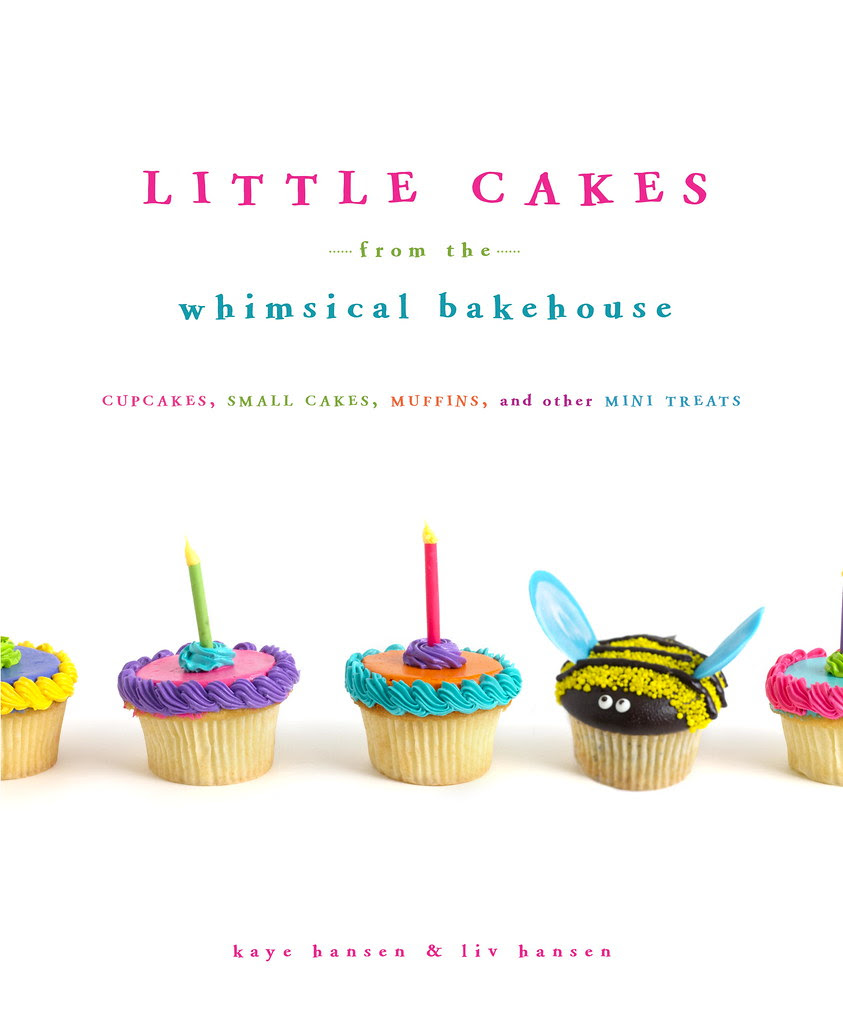 How did your cookbook come to be, and how much trial and error was involved with the recipes? By now, was it a piece of cake, or were there mishaps along the way? How long did it take you to complete the book?

Liv: It’s hard to ignore the cupcake craze that is sweeping our country. At my mom’s bakery, The Riviera Bakehouse, cupcakes fly off the shelve--in an average week, the bakery sells about 40 dozen. I knew I wanted to write another book so I thought why not one about cupcakes? As I looked into it, I realized there were already plenty of cupcake books out there, so how could I tweak it? That’s when I started thinking miniature. I’d always made small cakes at the bakery and thought that the addition of these tiny treats would broaden the appeal of our book.

Perhaps because I had two books under my belt, I was less daunted by the writing process for Little Cakes so I was able to write it a lot faster than my first book. Nevertheless, producing a book is still a long process. From inception to publishing it took about two years.

Kaye: There wasn’t much trial and error on this one. I mostly used our bakeries’ existing recipes and scaled them down for the home kitchen. We home tested each recipe, sometimes more than once when needed.

Let's start with the title: what's the difference between little cakes and cupcakes?

Kaye: Cupcakes are baked in a specific pan while little cakes can use a variety of pans (different shapes and sizes). For the most part, the recipes are interchangeable.

In addition to your recipes, you have lots of baking and decorating tips. What's the biggest mistake people make when it comes to cupcakes?

Liv: I’m not sure if there is one big mistake people make. But there are some baking basics that could affect the cupcake like maintaining the proper oven temperature and not over-mixing or under-mixing the batter. As for decorating, anything goes.

Kaye: I always tell people to read the recipe through before starting. This will often prevent mistakes.

Do you have a favorite recipe in the book?

Liv: In the spring, fall and winter my favorite recipe in the book would have to be the plum kuchen but when summer rolls around I can’t resist our “real” fresh strawberry shortcake!

Kaye: My year round favorite is our Coffee Chocolate Chip Muffins.

Who is your target audience for the book? Is it experienced bakers, or can novices make these recipes as well?

Liv: The level of difficulty of each recipe and design range from simple to advanced. Even some of the more difficult designs, if taken step by step, can be made by a novice. So, there is something for everyone in this book, whether you want to simply ice a cupcake with pink frosting or make a wedding cake.

Kaye: All levels of bakers can use this book. Some recipes need just one bowl and a spoon, while others use a variety of tools and have a few steps.

Were there any recipes you tried out that didn't make the cut?

Liv: There were a few recipes that didn’t make the cut, not because they didn’t taste good, but because we didn’t have enough room for everything. We’ll save them for our next book…

Liv, you started helping your mom, Kaye, make buttercream roses at age 10. At what age would you suggest parents start having their kids help them bake cupcakes and become a part of the process, and is there a specific recipe you'd recommend for this momentous event?

Liv: I think the earlier you get your children involved in the kitchen, the better. My son is three and loves to help me bake and cook. Last week, we each made a batch of banana muffins. I made mine and alongside me I let him do his own thing, measuring and mixing himself. His batter was lumpy and bumpy but he made it himself (I improvised a little and snuck a cup of milk into his before scooping into the pan). In the end, his muffins were a little salty but edible and he felt very proud--making me and his dad sample them. That said, muffin recipes are a great place to start, because most only need a spoon and a bowl.

What's the one main piece of advice you'd give someone about baking the perfect cupcake?

Liv: The perfect cupcake, with a beautiful dome and perfectly symmetrical, can be somewhat elusive. Not all cake recipes can bake up as cupcakes but for me that doesn’t matter. In the end it’s really about how it tastes. Enjoy it no matter what it looks like.

Kaye: Always read the recipe through before starting. Have all of your ingredients at room temperature (unless otherwise noted). Pre-measuring your ingredients makes it really easy to whip up a batch of cupcakes. Lastly, always make sure your oven temperature is properly calibrated.

You mention in your introduction that cupcakes are now "BIG." Why do you think they've become so popular in the last few years, and where do you see the future of cupcakes going?

Liv: In good times and bad, cupcakes are a treat we return to. Cupcakes comfort our soul, feed our inner child, and they are just plain fun! The appeal of cupcakes is not going to subside any time soon. I predict cupcake-store franchises popping up around the country.

And now for some personal questions…

Liv: Considering I make my living decorating cakes, or perhaps because I make my living making cakes, I don’t eat much of them, maybe just a couple of times of year. But if muffins (my favorite incarnation of the cupcake) count, then a lot more often. My mom is the same. Obviously she gets pleasure from other people eating her sweet treats, but she rarely indulges in them--except for her daily muffin.

Liv: I have to admit, although I’m not partial to most icing, even my mom’s rich and buttery Italian meringue buttercream, I have a weakness for our Kids’ buttercream: Old fashioned butter, milk, and confectioners’ sugar icing. It is super sweet and the amount dolloped on a cupcake is the perfect serving.

Kaye: The best thing about eating a cupcake is it just for you.

Liv: I guess I’d have to go for the Classic Vanilla Cupcake. Oh wait, I really love our Hazelnut cupcakes, which are a twist on our Pecan Cakes.

Kaye: Liv has never been a big chocolate lover, but I’d go for a chocolate cupcake with fudge icing.

Kaye: For me, desserts are a mood thing. Sometimes you crave a decadent chocolate truffle and sometimes a simple cupcake hits the spot.

Liv: I think the cupcake is pretty perfect as it is but I would love to see an innovation in packaging. Maybe this is more from a business standpoint, although a fellow mom agreed, we need a great box for transporting cupcakes. It is too difficult to get cupcakes out of the standard plastic-grocery-store-kind and in a standard cake box, those cupcakes you spent so much time making get mushed on the edges.

Liv: I bake at home with my son, but I’ve never made a traditional cupcake with him.

Kaye: At the bakery we have many bakers who whip up batches of cupcakes for us. But I do test out new recipes.

Liv: I don’t have a clear first memory of cupcakes, more of an association with school birthdays. I never liked chocolate as a kid so I do recall being disappointed if there weren’t any vanilla cupcakes to choose from.

Kaye: I have a vivid memory of Liv decorating a batch of cupcakes for my niece’s birthday. This was before we had the bakery. The cupcakes were colorful, with polka dots and fun patterns, a great glimpse into the future.

Liv: Watching my son devour the fudge icing off of his birthday cupcake.

Liv: Even though I am a cake decorator and artist, I am most drawn to cupcakes that look completely home-made. They look the yummiest! 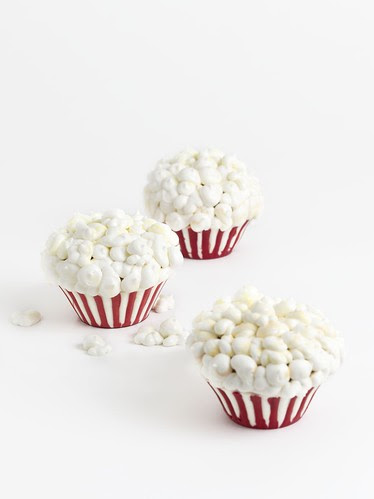 Are you having a sleepover birthday party? An Oscar bash? Or just a movie marathon? Why not serve these little popcorn cupcakes. Wanting to imitate an old-fashioned popcorn box, I searched for red and white striped cupcake papers to no avail. So, I decided to make a striped chocolate shell to hold the cupcake instead. I piped buttercream “popcorn”—definitely more filling than the real thing, but very fun. An extra sweet surprise awaits you at the bottom of the shell (if you get that far): dulce de leche.

what you will need:

1. Bake the cakes and let them cool completely. Freeze for 1 hour to overnight. Prepare the filling and icing.
2. Rest the silicone cupcake liners in a cupcake pan so that they are slightly flared at the top and do not touch the bottom.
3. Melt the white wafer chocolate. Pour one third of the chocolate into a bowl and tint it red. Pour the white and red chocolate into separate pastry cones and cut medium holes in the tip of each. Pipe alternating red and white stripes up the inside of each liner, using the ridges of the liner as a guide. Do not pipe any chocolate in the bottom of the liner until the chocolate has set on the sides; it may get filled as the chocolate settles. Let the chocolate set for a few minutes. Pipe an additional line of white chocolate around the top inner edge to give support, and fill in any areas where the cupcake liner is still visible. Set aside to harden (approximately 1 hour).
4. Carefully peel the silicone liner off the popcorn bucket.
5. Remove the cupcakes from the freezer.
6. Place 11⁄2 tablespoons of dulce de leche in the bottom of each bucket. Place one cupcake, with the paper liner removed, into each bucket, trimming the bottom of the cupcake at an angle if necessary.
7. Prepare the tinted and flavored buttercream: approximately 2 tablespoons soft buttery yellow and 2 tablespoons dulce de leche buttercream (see page 33).
8. Place a coupler inside a pastry bag. With a metal spatula, spread a very small amount of the dulce de leche buttercream up one side of a pastry bag. Spread a very small amount of yellow adjacent to the dulce de leche. Fill the rest of the bag with the untinted buttercream. With a #8 or #10 round tip, pipe popcorn all over the top of the cupcake by squeezing and holding in place until a ball forms. Tail off. Then squeeze with fluctuating pressure as you move the tip up and down along half to three quarters of the ball’s circumference.
9. For fullest flavor, serve the cakes at room temperature.
cupcake interview recipes