Posted by Rachel on May 27, 2008
So I'd heard rumblings about the availability of frosting shots, but hadn't really thought about it much. Turns out, it's true. Select bakeries such a Babycakes NYC and Sprinkles do sell frosting shots. (Or did? It's been reported that Babycakes no longer sells them. Boo.)

The Babycakes one from the blog The Girl Who Ate Everything: 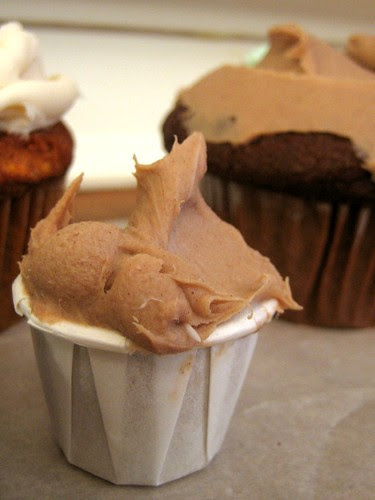 Behold, the mysterious frosting shot. Nick was the brave soul to actually buy one of the babies instead of saying, "Whoa, awesome idea, I should eat that someday," like I've been doing. He said it was good. I guess you can't go wrong with a shot of frosting.

Sprinkles has a secret menu with its 75-cent frosting shots (like In-N-Out's (not-so)secret menu? Is that a Southern California thing?).

The blog Fast Food Maven has the scoop.

The shots come in mini-paper cups, and are pretty hefty — about 2-3 ounces. The frosting is, in fact, so thick that you can hold the shot upside without anything falling out— kinda like a Dairy Queen Blizzard.

It is the perfect size for frosting addicts, which is why I brought Tamara along with me. You should have seen the dreamy look on her face when the Sprinkles worker walked out with my order: a variety pack of frostings. (Click on my pic, right, to enlarge)

Frosting menu: Flavors change daily, and are based on whatever cupcakes are being sold that day. For example, on Saturday the frostings are creamy vanilla, bittersweet chocolate, coconut cream cheese, fudgy milk chocolate cream cheese, cream cheese and strawberry.

Red Velvet cupcakes are sold everyday, so the cream cheese frosting can be ordered as a shot daily. The most popular frostings are cream cheese and dark chocolate frosting, Stein said.

One tip: Don’t forget to ask for sprinkles on the frosting. If you don’t ask, you might not get any. For example, on the coconut frosting, I had them add coconut flakes on top so it replicated the look of the cupcake.

Read on for their frosting to cupcake comparison

I'm not sure if this cupcake shooter by Kickass Cupcakes counts but I think not, as it's described as a "beverage" and even super-creamy frosting can't really be called a beverage, right?

SplendidlyImperfect said…
At the Sprinkles in Scottsdale, the frosting shots are right there on the menu/wall.
5/27/2008 6:10 PM

Anonymous said…
most bakeries will give you a "serving" of frosting if you ask nicely and say "whatever you think is fair to charge." Some grin knowingly when you do this, other people without a sweet tooth look perplexed (what are they doing working at a bakery anyway??)
5/27/2008 8:11 PM

Fast Food Maven said…
Thanks for the link. I'm honored to be included in this fantastic NYC blog.
FYI: On the Sprinkles post..The shots are definitely on the menu, but not "publicized" by the cupcake shop.
Nancy Luna, aka The Fast Food Maven
5/28/2008 9:36 AM

thetiniestspark said…
this is pretty much the most heavenly marketing idea ever. the best cupcake spot in london, buttercup bakery, serves shots of frosting for a quid, too.
7/21/2008 6:31 PM

Unknown said…
Frostings in Lake Forest (CA) has frosting shots AND the best cupcakes. My favorites: Red Velvet from the everyday selection and Bordeaux on Wednesday and Saturday!
9/16/2009 5:59 PM

Graceland Cupcakes said…
I neeeeeeed to come to America for these amazing bakeries!!
I wish Londoners these!
Follow my blog :) currently taking orders... http://gracelandcupcakes.blogspot.com/
6/08/2010 1:41 PM