Fried cupcakes at the OC Fair 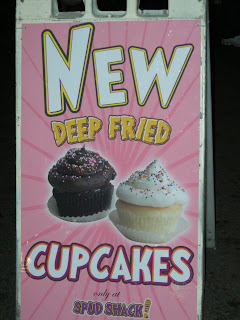 I ordered the chocolate fried cupcake. From what my taste buds could gather, the cake part of the cupcake was baked and then deep-fried. After pulled out, they put a chocolate sauce on top and finished with sprinkles.

I was actually very apprehensive about trying this cupcake. I wasn't expecting to like it because it was fried. I haven't eaten many sweet foods that have been given the fried treatment, so I didn't expect it to taste very good. My first bite told a different story. It wasn't too bad. From then on, every bite was better and better. I really enjoyed it and ate the whole thing by myself.

The only thing I was bummed out on was the frosting. The thin layer of chocolate sauce wasn't enough. I wanted some real frosting, piled high on top. In hindsight, I realize that frosting would have melted because the cupcake was served hot.

Verdict: Try something new! My fried cupcake was a sweet surprise and something I will look forward to eating again next year! 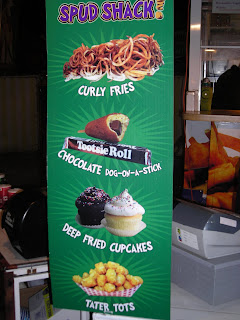 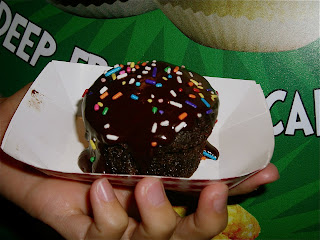