Posted by Rachel on September 22, 2008
We've posted photos of chocolate chip cookie dough cupcakes before, and Ice Cream for Dinner even has a how-to post on making them.

But the ones we tried last week at the NYC Cupcakes Take the Cake Meetup, were different. They had actual chocolate chip cookie dough on top of the cupcake! So for all you fanatics who, um, like to buy a tube of premade cookie dough and snack on it, or make your own and find that before you get to baking, many nibbles have been taken out of the bowl, these are for you. They're by Cathy Erway of the blog Not Eating Out in New York. She even calculates the cost! She's kindly allowed us to repost her recipe below. And I can't resist quoting her (it's true, I was amazed at the deliciousness). More on the Meetup and photos coming soon. 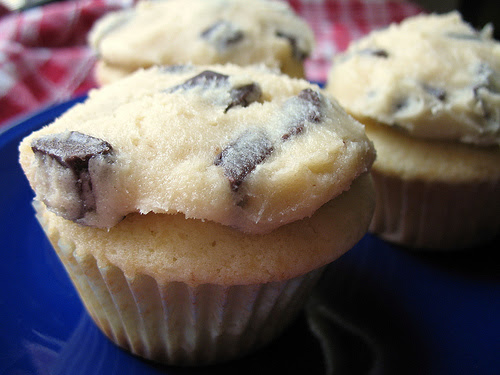 Despite the slight risk of Salmonella and other food-bourne illnesses, cookie dough has probably been eaten by every American since the raw dough craze took off in the early 1990’s — in ice creams, refrigerated tubes, and straight from the mixing bowl. Here it’s transplanted on a vanilla cupcake as a frosting substitute. When I brought these to a cupcake social hosted by Rachel and Nichelle of Cupcakes Take the Cake last week (just something I scraped together on a whim, which I’ll describe further below), I had no idea the reception they would receive. Rachel’s eyes nearly popped out of their sockets when I told her what was on them — no, it’s not chocolate chip cookie dough-flavored frosting, it’s really the raw dough. This is more or less the same reaction that occurred with everyone else at the party once they found out.

from Not Eating Out In New York:

for the cookie dough:
1/2 cup all-purpose flour
1/4 cup unsalted butter, softened
1/4 cup packed brown sugar
1 tablespoon sugar
1/3 of a beaten egg (save the rest for next morning)
1/4 teaspoon vanilla
pinch of salt
1/2 cup or so semi-sweet chocolate chips or chunks

Preheat oven to 375 degrees. In a mixing bowl, beat together the butter, sugar and vanilla for the cupcakes only. Add egg and beat until fully blended and creamy. Combine the flour, baking soda and salt in a separate bowl. Gradually add flour mixture to butter mixture, alternately adding the milk gradually. Divide equally among six cupcake liners in a muffin tray. Bake about 20-25 minutes, or until a toothpick inserted into the center of a cupcake comes out clean. Let cool completely.

Meanwhile, make the cookie dough: Beat together the butter, sugars and vanilla. Add the egg and beat until creamy. Gradually add the flour and salt, and once fully blended and smooth, add the chocolate chips. Cover and chill in the refrigerator at least 15 minutes. Divide dough into 6 equally-sized balls and press with your palms into discs resembling chocolate chip cookies. Press on top of the cooled cupcakes.
cookie dough cupcake meetup cupcake recipes food blogs Not Eating Out in New York

Anonymous said…
I've made this before. I am really obsessed with raw cookie dough and it just wasn't working for me having it baked inside a cupcake. Sooo, I whipped it real good and placed a heaping scoop on top of the cupcake. So fricking tasty. *drools*
9/23/2008 11:44 AM

Unknown said…
I actually have a great cookie dough cupcake recipe on my blog. I used edible cookie dough which tastes pretty much like normal cookie dough. Check it out at my blog http://mamabaker.wordpress.com/2008/09/06/chocolate-chip-cookie-doh-cupcakes/
9/23/2008 3:51 PM

Bette said…
Cookie dough that is in icecream and otherwise available commercially is made with a pasteurized egg product so their is no risk of salmonella.

If you're going to do this at home, pasteurized eggs are recommended especially for children, pregnant women, the elderly or anyone whose immune system is suppressed due to illness or medication.

Eggs that have been pasteurized in the shell are the best. Davidson's uses warm water to pasteurize, so there are no additives like there are in pasteurized liquid eggs.
4/13/2009 1:20 PM