Giant cupcake vehicles at "How Berkeley Can You Be?" Parade

The Daily Californian has an article about this interesting parade, How Berkeley Can You Be? It's hilarious because I went to UC Berkeley and think this is a hilarious idea.

Thousands of people attended the "How Berkeley Can You Be?" Parade and Festival, which showcased how creative-or rather, how "Berkeley," community members could be.

The parade, which took place along University Avenue, led into a festival in Civic Center Park.

The event drew about 15,000 people throughout the day, said Justin Katz, program director of Epic Arts, a cultural group and one of the main organizers.

The event was founded by University Avenue Association member John Solomon in 1996 in order to celebrate the avenue and promote its businesses.

"We try to get all the different groups that make Berkeley such an interesting place represented in the parade," he said. "We also wanted to make a parade that was different from your typical parade."

The parade featured over 100 acts, and led into a festival with nearly 45 organizations, mostly Berkeley-based.

One of this year's returning acts was Acme Muffineering, whose members rode cupcake-shaped cars running on electric scooter motors.

"It's a lot of fun to get out and have people cheer at us, smiling and waving and saying how much they like the cupcakes," said Berkeley resident Claudine Ozzello, who rode on a cupcake. "We live in Berkeley, so we're just showing off how Berkeley we can be." 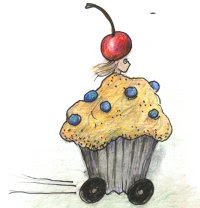 Cakespy said…
My goal is one day to have a larger-scale house that looks like one of these vehicles. You know, kind of like Spongebob's pineapple, but a big cupcake.
9/29/2008 12:44 PM