Posted by Rachel on September 30, 2008
Today was the official release date of Laura Numeroff's kids' book If You Give a Cat a Cupcake. I predict we see even more kids-themed cupcake books, just as we are seeing more and more cupcake cookbooks. 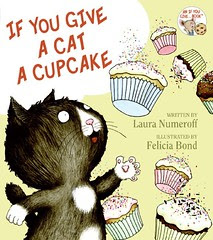 Here's the review from Publisher's Weekly, which says it's geared toward kids ages 3-7:

If you give an adorable gray kitten a supporting role in a popular series, he'll cry out for a lead—and thus, this latest entry from Numeroff and Bond, which features a cat that first appeared in If You Give a Pig a Party. Like its predecessors, the story bubbles with cascading “if... then” silliness: a girl's granting of a cupcake, for example, leads to a request for sprinkles, which causes a mess; cleaning up gets the cat overheated, which prompts a trip to the beach, and so forth. Some of the connections feel forced even for this series (a ride on a merry-go-round whale inspires a wish to go to a science museum), but the vivacity of the drawings and pertness of the kitty protagonist make up for the shortcomings. Besides, a lot of the series' appeal can be credited to the competency and ingenuity of the various human enablers in the books. While sometimes baffled by the goings-on, the girl in these pages is able to roll with the punches—unlike many adults.

We're waiting for the copy we just ordered from Amazon, but will let you know what's in it soon, and in the meantime, here are her tour dates: (sorry for the crazy spacing, just scroll down; I copied the code from her site, but if anyone knows how to fix this, email me at cupcakestakethecake at yahoo.com - thanks!)