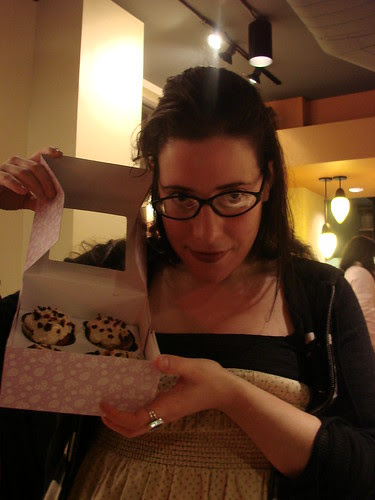 So on Monday, my birthday, I met up with Blondie of Blondie and Brownie, who gifted me with one of the most delicious cupcakes I've ever eaten, an Elvis cupcake - banana cake, extra creamy, light peanut butter frosting, and salty, delicious bacon bits on top (get the recipe from Brownie). Here's what it looked like: 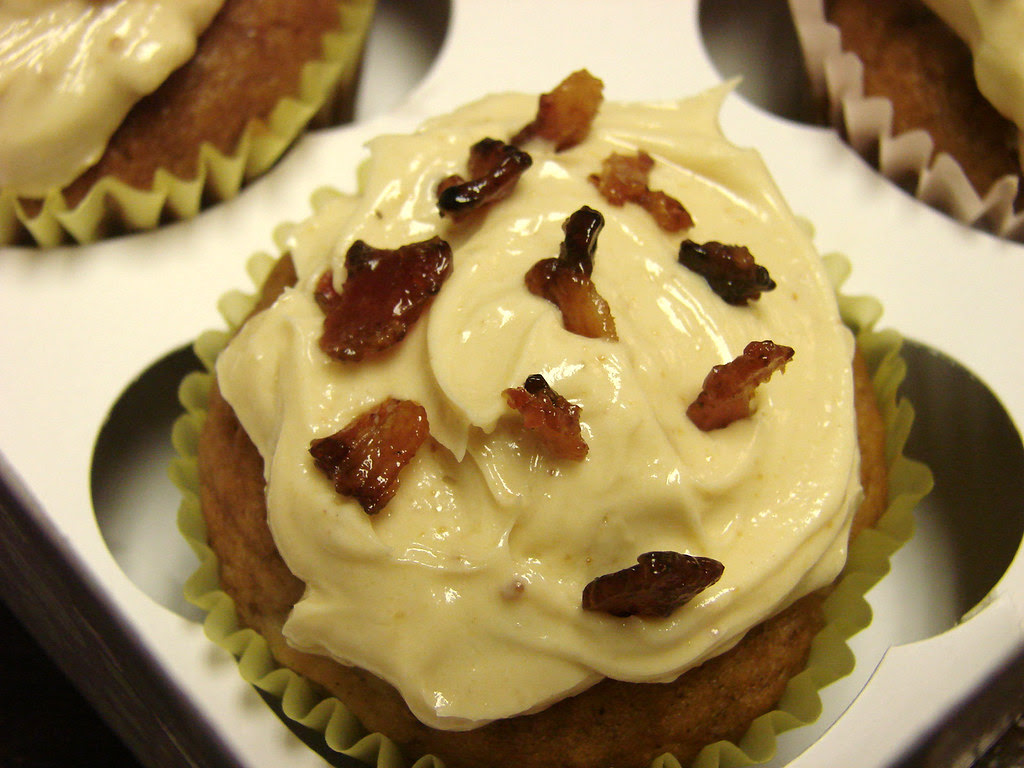 Seriously, it was SO good and I was so touched that she went out of her way to bake them special and bring them to me. I've had my fair share of peanut butter frosting and often it tastes like, well, peanut butter, in terms of texture. It's thick and heavy and, while delicious, kinda sticks in your stomach. This was the opposite: super light, and sweet but still retaining the peanut butter flavor. The cake was very moist and full of banana freshness. The saltiness of the bacon didn't kick in at first but when it did, oh boy! It was the perfect salty and sweet snack, and also my very first Elvis cupcake.

Ever since then, I've been thinking about bacon (did you know there's a bacon Flickr pool?) and bacon cupcakes, so here's a little roundup: 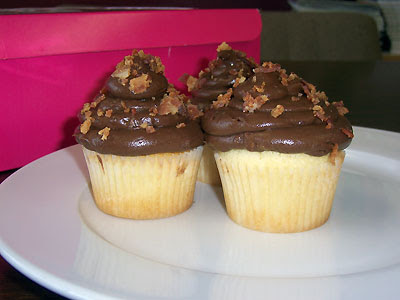 from Bacon Cupcake Day at the Culinary School of the Rockies

from Gonzo Gastronomy who writes:

Using a basic pastry bag and wide tip, I filled it with Fluff and squirted some up the bottom of each remaining cupcake. I then made a basic peanut butter frosting and topped each one. Then, the fun began. This time of year, two beers you’ll often find in my house are chocolate stout and cherry wheat because they make an ass-kicking black & tan. So I fried up some bacon, drained it and chopped it. I then put some chocolate stout and brown sugar in a sauté pan and let it bubble away. When it had reduced, thickened and caramelized, I tossed the bacon pieces back in and coated them. Holy crap was this stuff good! 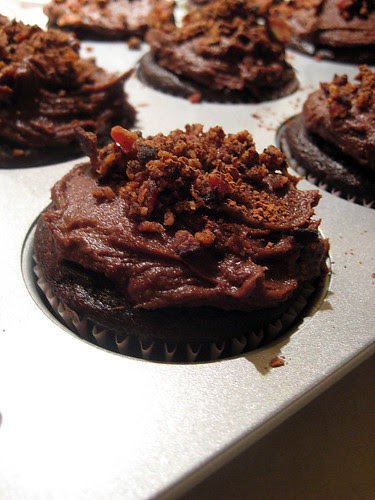 from Flickr user ohnochriso - he used this recipe and this frosting 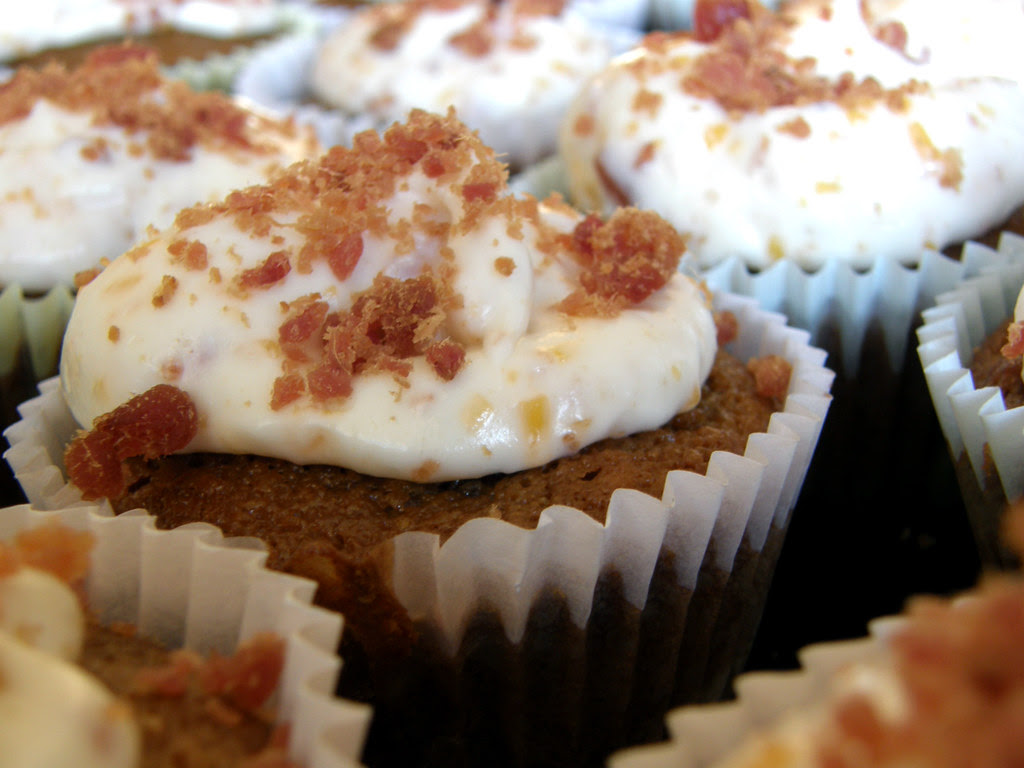 And some fake bacon: 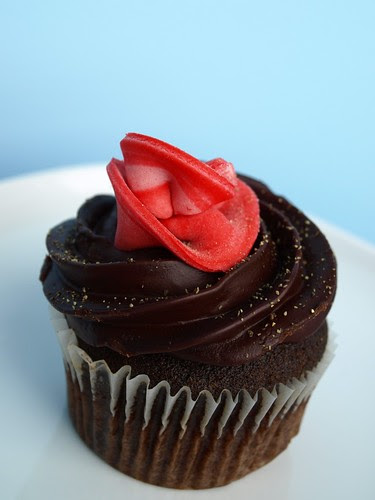 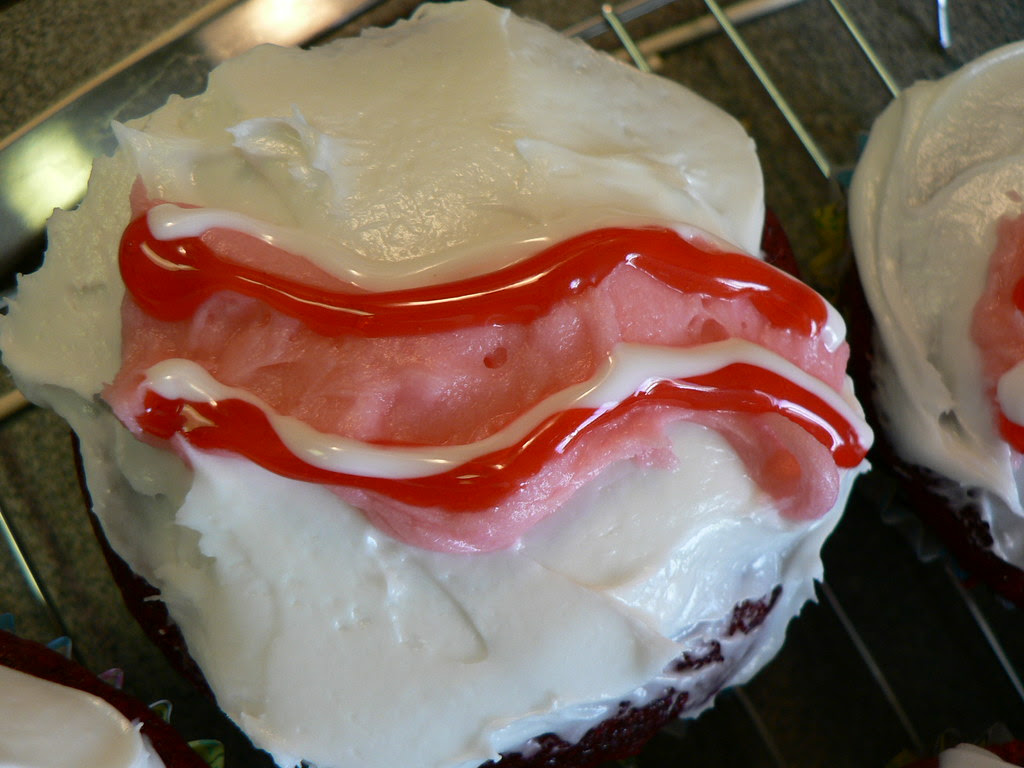 SShuuks said…
The Elvis cupcake sounds DELICIOUS actually. I'm hoping i can find someone in my friends and family circle willing to try it :)
11/14/2008 5:24 PM

sarahann said…
bacon on a cupcake doesn't really seem like it would be good. BUT that cream filled one or whichever looks awesome
11/15/2008 3:07 AM

Anonymous said…
I am so confused! Did I miss a 'bacon movement'??? There are people having bacon parties and suddenly bacon becomes a popular topping on cupcakes (whether real bacon or iced on!). This is heaven on earth!!!!
11/15/2008 12:09 PM