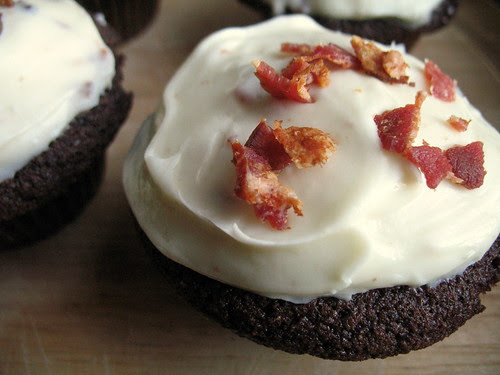 Cathy Erway over at Not Eating Out in New York (who is also one of the food bloggers on my SXSW panel, details coming soon) has done it again (she of the famed chocolate chip cookie dough cupcakes), this time with chocolate cupcakes with bacon cream cheese frosting! Go to her blog for the recipe and more info.

Here's a little of her wisdom:

Next, it’s very important to bring both your cream cheese and butter to room temperature before you give a try at whipping them together with confectioner’s sugar for the frosting. If you do this, simply by leaving them out for half an hour, then churning out a beautiful frosting is easier than pie. For some reason I didn’t predict the cream cheese needed as much de-chilling and failed to take it out as early as the butter. Since it couldn’t really be whipped in any way, shape or form with a whisk until it had gotten to that precise softened texture, it simply made me late for my party as I waited.

The last, and least important, personal flair I gave these cupcakes was a drop of honey to the frosting instead of vanilla extract. I thought about drizzling honey on top of them too, perhaps to spell out the letters of Scott’s name. But when it comes down to it, I’m not very steady with a spout or piping bag, as previous attempts at cupcake-decorating have taught me. Plus, I didn’t want to overwhelm the eventual eaters of the cupcakes with too much substance — a sprinkle of bacon on top alone was enough to surprise folks, I promise you.
bacon Cathy Erway cream cheese frosting cupcake recipes food blogs Not Eating Out in New York