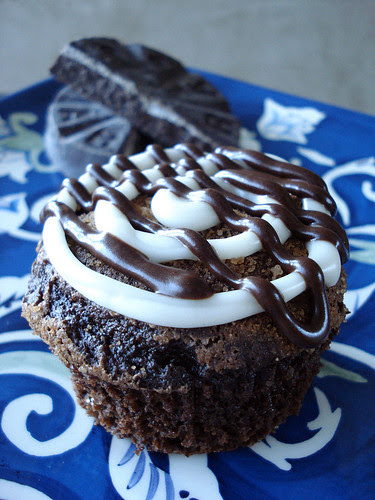 This Battle Chocolate with a Twist cupcake is made by blogger tastes like yum (via Flickr) for the Iron Cupcake Chocolate With a Twist competition (please note: we sometimes feature interesting-looking cupcakes that are part of Iron Cupcake that are in our Flickr pool, but we're not endorsing any one cupcake over another, just commenting on some of the ones that catch our eye).

These were actually inspired by the triple-layer Mexican chocolate brownies I dreamt up a while back. I knew immediately I did not want them to be filled, but closer to a cakey brownie or a heavy sponge cake. Some careful thought went into the recipe with the secret weapon of applesauce making them not only moist with a soft crumb, but lower in fat as well. These are a deep, dense, spongy Mexican chocolate cake with rich chocolately flavor not overpowering the cinnamon undercurrent. Cinnamon-sugar sprinkled on top prior to baking made for powdery, sweetly perfumed tops with a beautiful crackle to them. I topped them with a swirl of cinnamon icing (speckle-free thanks to a bottle of cinnamon extract I picked up on sale one day) and a healthy wiggle of chocolate icing.
chocolate food blogs Iron Cupcake tastes like yum vegan