Posted by Rachel on December 05, 2008
We love the hugely popular cakes-gone-wrong blog Cake Wrecks, which we've posted about before. Blogger Jen from Cake Wrecks shared this guest blog post with us:

When Rachel first asked me about guest blogging here, we both thought it best that I go straight to the ugly underbelly of the world of cupcakes, and expose all the horrors found therein. After all, part of celebrating the goodness of cupcakes is weeding out the unspeakable perversions: the malformed, the misguided, and the just plain ugly. I’m talking, of course, about cupcake cakes (CCCs for short). For you uninitiated in these culinary catastrophes, allow me to explain the basic concept of the CCC:

Step 1: Glue cupcakes (in their wrappers) to a cake board using icing.
Step 2: Slop on a layer of icing approximately 1.5-2 inches in thickness, smoothing over the gaps between cupcakes like drywall mud over, er… drywall. (See reference photo below) 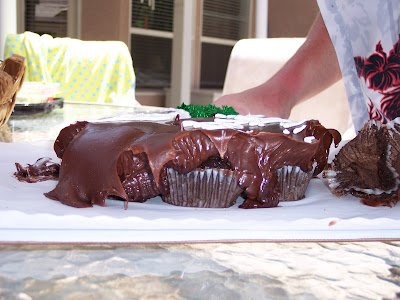 (This is the proper icing to cupcake ratio for a CCC.)
Step 3: “Decorate”

When done, you end up with something like this: 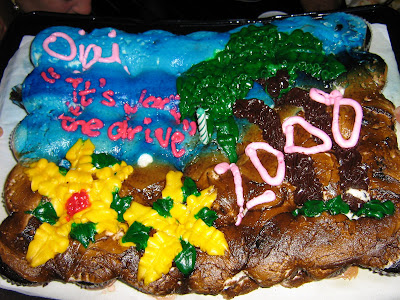 My readers tell me this says “Ojai, It’s worth the drive”, but let’s ignore the random quotation marking for the moment and instead focus on all that baked poo soufflé goodness, shall we? I mean, it takes an uncommon skill to achieve that kind of texture. In fact, this CCC visually sums up my feelings on CCCs in general, but of course I know you’re going to want more examples. (Picky, picky!) So, here goes.

Generally speaking, CCCs fall into one of three categories, depending on the baker’s personality.

First, there’s the Steamrolled CCC, characterized by its lumpy edges and general “run over by a cement truck” appearance: 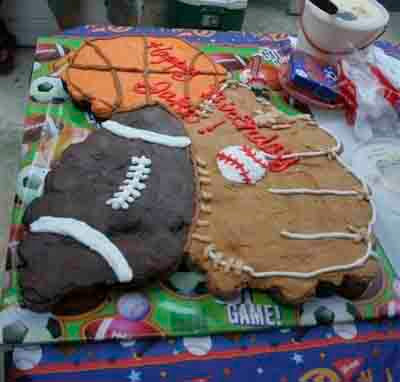 This type of CCC is less malevolent and more misguided. Its limping sadness speaks of squashed frustration and defeat. The decorator didn’t intend for it to be this ugly: he or she just couldn’t help it.

Here’s another example, and my readers’ favorite Steamrolled CCC so far: 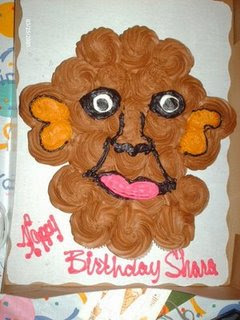 Betcha can’t guess who that’s supposed to be! (Click here for the answer.)

Next is the Lazy and/or Stingy Decorator’s CCC. Some bakeries recognize that no one wants the mess of the more traditional- i.e. spackled together - CCC. Others realize that using five pounds of frosting per CCC is more expensive than only using two pounds of frosting. So to compromise (and save money), they place individually iced cupcakes together and then decorate them as a whole, like so: 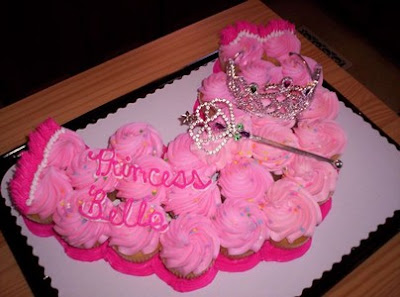 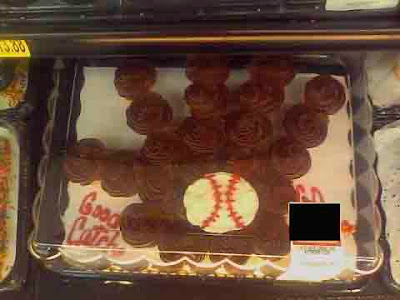 The result is what large chain bakeries call a “win-win”: the CCC’s intended design is now completely unrecognizable, AND they’re saving money on frosting. (They do, however, make sure there’s still enough icing around the bottom edges of the wrappers to ensure no one will escape with clean hands. Rules are rules.)

Next is the affectionately titled “WTF” category. This is for all those passive-aggressive bakers out there. It says, “I value this job only as far as my next paycheck, and confounding customers with my inept and nonsensical creations is the best perk I get this side of free day-old doughnuts.” 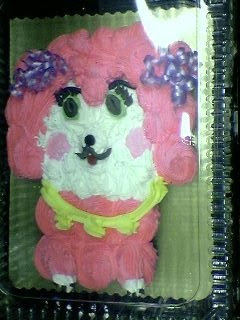 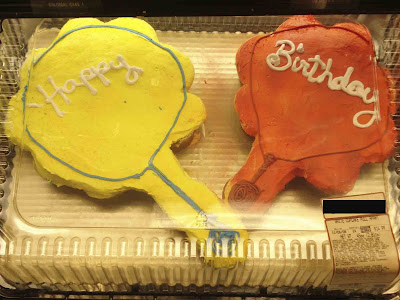 Ping-pong paddles, baby rattles, or balloons in battle? With CCCs, does it really matter? 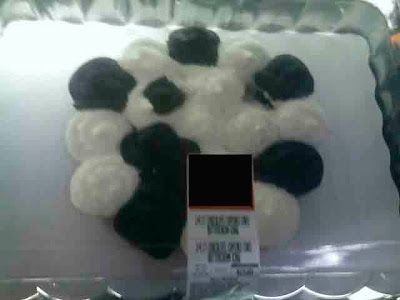 Hmm. I’m guessing soccer ball. Final answer.
When asked to explain these creations, decorators will often respond with a carefully practiced “Huh?”, apathetic shrug, or “I dunno; that was [insert other employee’s name]’s job.” As soon as the customer leaves, said baker will then cackle maniacally and place another ‘x’ on his or her “Irate Customer” score card. (The employee with the highest score at the end of the week gets to work the customer service counter.)

Well, I’ve made my point the best way I know how: with sweeping generalizations. (And for those of you who don't know me: I do realize that most decorators are wonderful, hard-working individuals. It's just a select few who wreck it up for the rest of us.) So remember: CCCs are wrong, cupcakes - and cakes! - should be treated with proper respect, and mean customer service people had to earn their way there. I hope that you will join with me and your fellow baked-goods-lovers over at Cake Wrecks in just saying “no” to CCCs, so that in time these wrecktastic creations will be relegated to the “what were we thinking?” past, right along with mullets, low-carb diets, and pretty much the entire decade of the 70s. (Except ABBA; I'm a sucker for those singing Swedes.)

Many thanks to Allison, Rachel and Nichelle for allowing me to share with y'all today. Wreck on!

Anonymous said…
funny to see a cake with my name on it since its so uncommon!!

Lynette said…
I'm still trying to figure out the pink princess thing... what is that shape supposed to be? I think the soccer ball is a panda, but I'm not sure.

I love the design classifications and you did a good job of explaining the overicing problem... I really think the icing is my main issue with CCCs (aside from HORRID) designs.

I'm still amazed that anyone claims these are neater or easier to eat than regular cake; peeling that wrapper off sounds completely not worthwhile to me. Particularly as we know it's been iced on the bottom, the top, and probably the side! You'd be better off with a handful of corner piece from a regular cake!
12/05/2008 11:54 AM

Meagan , Brian, Sydney and Jonas! said…
The happy birthday "balloons" look like whoopie cushions to me. Also, the princess cake is a magical scarf or a pink magical carpet. See the shaggy threads at the end?
12/05/2008 12:08 PM

Beth said…
I'm just so stinkin excited my CCC pic made it up... That poodle DOES have a mustache!

Anonymous said…
Hey, it's nice in here! And pink!

Julie said…
I also thought it was a lion of some sort. I also thought panda before soccer ball. Those were some great wrecks - many questionable CCC's. Poor recipients.
12/05/2008 1:13 PM

Girler said…
I was POSITIVE the Curious George was Beast from Beauty and the Beast... I even bet my daughter thats who it was. She said it was Big Foot so I saved myself $10 and she still had to do the dishes.
12/05/2008 2:18 PM

Mombi said…
I think the pink dog is Poochie! Anyone remember Poochie?

Sorry, still have my Poochie toys in my parents' attic.

Unknown said…
Snort! Those are so bad, you could make a show called "When Cupcakes Go Bad"! We actually had a really good CCC in the shape of a martini glass for our Secret Agent party, and the frosting was amazing! Usually, I hate store frosting, it's all grainy, tastes bad, and it's 2 feet down to the cupcake, I just blogged about it (shameless promotion) on my blog.
12/05/2008 3:42 PM

I remembered seeing the CG CCC... and this time around I STILL thought it was the Cowardly Lion...

That's what I call "unrecognizable"

Pretty Things said…
Audible gasp of horror when I rolled down to see the Ojai cake -- hubby wanted to know what was wrong, all I could do was point at the screen.
12/05/2008 7:13 PM

Shara said…
Shara here - THE Shara (Not Sarah) actual real life receiver of the "Curious George" cake. This cake has taken on it's own life, I swear. It won't die! If it had been the cute attractive Curious George cake my son ordered, then we would have just eaten it and forgotten it. Not this cake, No way, no how! Thanks for them mention - again!
12/06/2008 6:03 PM

Anonymous said…
For what it's worth, I immediately thought of Whoopee Cushions when I saw the ping-pong paddle creation.

Anonymous said…
For my money, it's all about embracing your medium. If I want cupcakes, I want CUPCAKES. If I want a cake, I want a CAKE. The CCC tries to have the best of both worlds, and ends up with the eowrst of both!
12/08/2008 2:59 PM

Anonymous said…
Smashed curious George is my favorite! He is also known as steamrolled Sasquatch at my house.
12/08/2008 3:03 PM

Anonymous said…
I'm another onw that thinks the pink and white dog is poochie.

Lynette said...
I'm still trying to figure out the pink princess thing... what is that shape supposed to be?

I *think* it's meant to be a tiara shape but they neither stacked the cupcakes to give it height nor arranged the cupcakes into a shape (other than a weird curve). Maybe it intentionally doesn't have a shape. Maybe all these weird cake artists actually intend to make these cakes look awful to act as a conversation piece at a party.
It's a cake conspiracy.
12/26/2008 9:40 AM

Graceland Cupcakes said…
Lol I think everybody has had the odd disaster now and again!
Practice makes perfect!