Today's guest blogger is Elise from The Cupcake Activist.

I have been a cupcake lover my whole life! I even had a cupcake cake at my wedding. So when Cupcakes Take The Cake asked me to be a guest blogger, I was thrilled beyond belief! This is why I became The Cupcake Activist...to share my love of cupcakes with others! Thank you and Happy 4-Year Anniversary, CTTC!

One of my favorites things to do is review cupcakeries. Sure, I love talking about cupcakes, but eating them is a lot better! Orange County has its fair share of cupcakeries. Some are good, others are not, they come and they go. 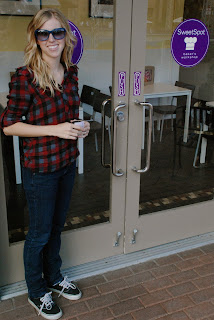 Owned by Janette Chabria and Chris Brown, SweetSpot Baker's Workshop is a new cupcakery that opened two weeks ago at the Irvine Spectrum. If you are familiar with the Spectrum, you might remember that there used to be a different cupcakery there called Sweet Lorraines. They closed a few months ago after only being open for six months. It's always disheartening when a cupcake shop closes. But when rumors of a new shop with different owners began swirling, there was hope for cupcakes again! 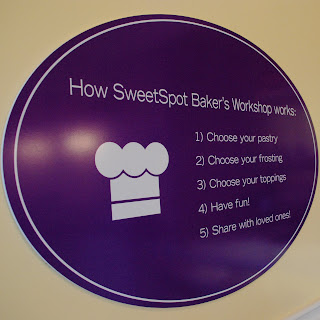 SweetSpot Baker's Workshop introduces a new concept that I have yet to see another cupcakery try. At SweetSpot you can buy one of their ready-to-eat cupcakes or you can "SweetCraft" it yourself. For $1.50 more you get to pick your flavors and they provide you with a cupcake, frosting, colored icing, and access to their "Wall of Sweets." 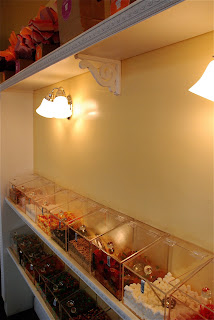 Halo, a first-time visitor to SweetSpot, helped demonstrate how to decorate a cupcake. He had a great time picking out the candy toppings and putting on the frosting himself. 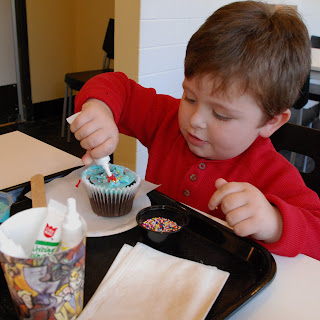 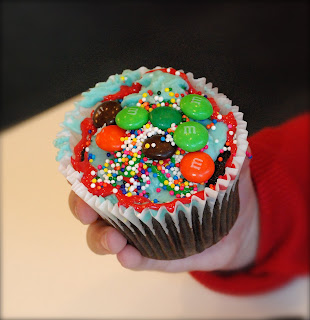 I could not resist decorating a cupcake myself. I chose a white cupcake with chocolate frosting. I had a hard time deciding which toppings I would use to decorate. I guess that's just the kid in me! I ended up drawing a few swirly things with the icing, added some red sprinkles, and topped it with Runts. 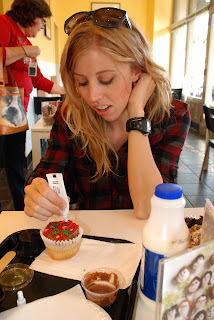 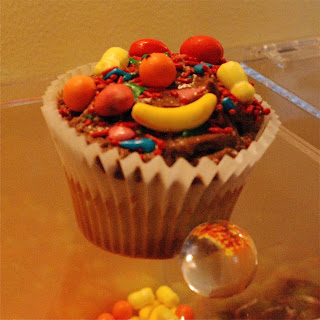 In case you don't have the time to design your own, SweetSpot has cupcakes that are ready-to-eat. I was intrigued by the Chocolate Cream Cheese cupcake. I had never eaten a chocolate cupcake with cream cheese frosting. The flavor combination was so good! The cake was moist and the frosting was tasty. I definitely recommend it! 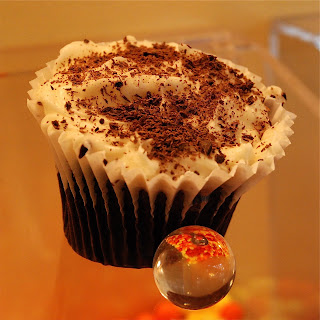 While in the store, I met Janette Chabria, who is one of the two owners. She informed me that they had this idea about decorating your own cupcake for a while, but had never come across this concept at any other cupcakery. 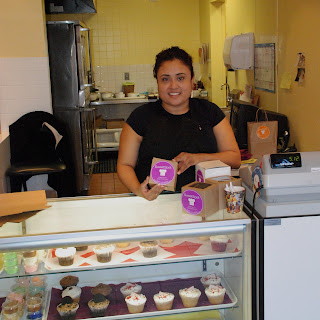 As a kid (and even an adult), this hands-on experience is a lot of fun! SweetSpot would be a great place for birthday parties. Besides baking great cupcakes, SweetSpot has an idea that no one else has. They have a winning combination that will do well in the cupcake world. Congratulations SweetSpot!

SweetSpot Baker's Workshop is located at the Irvine Spectrum: 83 Fortune Drive #225. They are near the ferris wheel. Their ready-to-eat cupcakes sell for $3.25 and their design-it-yourself cupcakes are $4.75.

COMING UP: This month I am featuring a special called "The 12 Days of Cupcakes." On each of the 12 days leading up to Christmas, I will post about a different cupcakery from Orange County. The scary part is how fast Christmas is approaching ... my first post will be on Saturday! 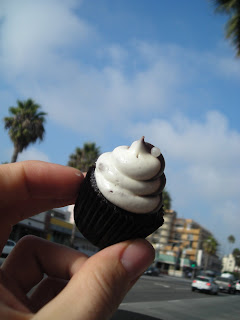