Posted by Rachel on December 25, 2008
My apologies - this was supposed to go up yesterday but I had a crazy day, then thought I wouldn't have Internet access at my grandmother's in Connecticut, but magically I do. So here's the belated (sorry!) guest post from Justin from cupcake review site Cupcake Race, another blog you should be bookmarking. Thanks, Justin!


You might think that given the chance to be a guest blogger on the most popular cupcake blog around, I would write something about how cupcakes are the perfect food, or my tips on making the best frosting, or how to decorate a cupcake to look like your favorite rock star or Disney character.

But I’m not. Other people can do that much better than I can.

I’m more of a cupcake eater than a cupcake maker. My fondness for cupcakes started really 10 years ago with Dinkel’s Bakery in Chicago, my hometown. I was a grad student on a tight budget, but I would treat myself a couple times a week to the small indulgence of a Dinkel’s cupcake. The cupcakes were big and, even better, they cost less than a dollar at the time so they were perfect for my budget.

But 10 years is an eon in cupcake years. Cupcakes have gone from being just one of the many different kinds of cakes and sweets that full-service bakeries offered, to being a destination food in their own right. Witness the number of bakeries that have popped up around the country in the last 3 or 4 years that not only specialize in cupcakes, but do ONLY cupcakes.

When I said earlier that I was more of a cupcake eater, I kind of lied. I’m really more of a cupcake documentarian. I started the blog, Cupcake Race, to document cupcakes in and around Chicago. I liked the process of searching out cupcakes, tasting them, weighing them, comparing them and most of all photographing them. 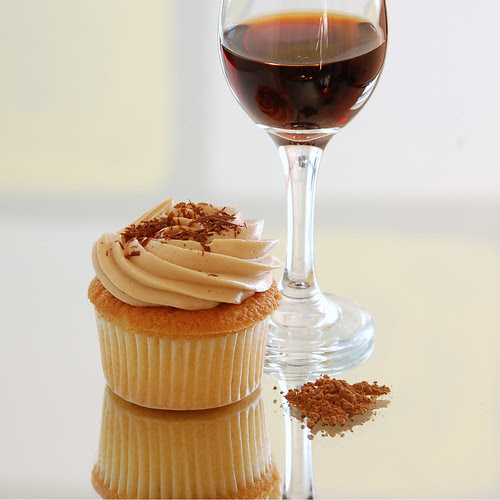 This is one of my favorite photos
So I didn’t really do it out of a passion for cupcakes, per se. It was really more that cupcakes offered an ideal documentary subject. They offered a way for me to express myself.

It was also through the blog that I happened to meet Beck, who is doing her best to convince me that I am an artist. I never thought of myself as creative. Or that what I was doing with Cupcake Race was particularly creative. It was just something I was doing.

But see, Beck is an artist herself, and she also teaches art to grade-school kids in Chicago. And though we met through the blog, it turns out that we actually happen to live within blocks of each other. We emailed back and forth about Cupcake Race. I asked if she was interested in doing some posts. We decided to have coffee and talk about what kind of arrangement it might be, but we ended up talking more about other things, namely art and photography, than about the blog. When we finished our coffees and were getting ready to leave, we hadn’t resolved anything about the blog. So on a whim we decided that Cupcake Race should sponsor an art contest, and Beck agreed to get all the official OK’s and make the arrangements at her school.

The idea of using a blog to write about things was obvious to me. But the thought of the blog interacting with the real world in the opposite direction – inspiring kids to create something tangible – had never before occurred to me.

The kids were jazzed about the contest. There were 18 entrants. We awarded a Grand Prize (a t-shirt with the winning artwork imprinted on it) and a First Prize (gift certificate for cupcakes). And as a bonus, the winning contestant’s entire class received cupcakes. 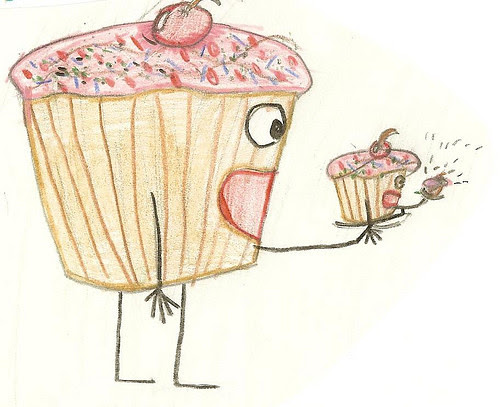 One of the Finalist entries
We asked the Grand Prize winner to say a little about his creation. Harper F. wrote:

“I created my art because in my spare time I like to draw adventures with stick people. The people are usually getting crushed by something, so since I figured you had to draw a cupcake, they would be getting crushed by it. Art can be fun in so many ways. Personally my favorite part of art is imagination. I want to give credit to all of the other contestants and to Cupcake Race. Thanks!" You can see Harper's drawing here.

To see a fun interview with the creator of Cupcake Race, check this out!