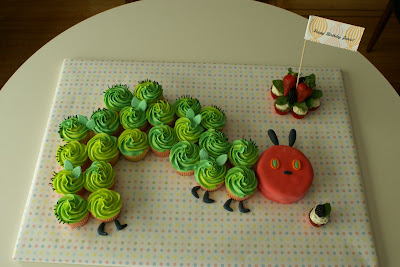 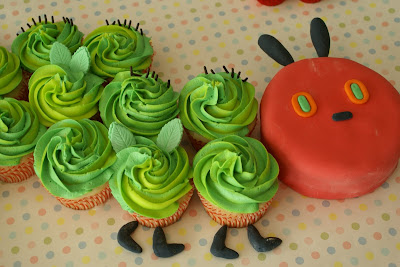 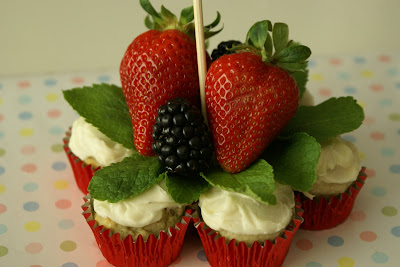 These are by Coco Cake Cupcakes in Vancouver, British Columbia, and are just too cute! The little black legs on the caterpillar are my favorite part.

There are many more photos on the Coco Cake Cupcakes blog, and they write:


I first made a ridiculously cute and small round vanilla layer cake with vanilla buttercream, covered in red fondant to create the adorable face of my little caterpillar buddy. Fondant eyes and nose, and two antennae, plus little bootie feet for the caterpillar were also made! I did vanilla cupcakes, and vanilla buttercream in a "psychedelic swirl" effect, blending two shades of green to try and mimic Eric Carle's beautiful watercolors. Little chocolate sprinkles plunked one by one into the buttercream created the furry bits of the caterpillar. To finish, I made a baby friendly "berry patch"-- low sugar banana cupcakes with mint leaves and fresh berries. The key to the puzzle was securing each cupcake down with my good pal Royal Icing. This stuff hardens like glue, so the cupcakes would remain secure on their polka dot cake board while traveling. Additional grass green frosted cupcakes with pretty flowers, roses and leaves also accompanied Caterpillar on his journey to 1st Birthday Land.