Posted by Rachel on April 06, 2009
First off - let me apologize for the lateness of this post. I visited the Baked by Melissa stand within days of its opening in SoHo and then did an email interview with Melissa over a month ago, but am just now posting it. For those in New York or visiting, her mini cupcakes are a cheap, tasty and convenient treat, plus she also has discounts for larger quantities. Her cupcakes are very, very mini (click here for sizing reference), and can literally be popped in your mouth. While some prefer larger sizes, I've seen lines at her window, especially on weekends, and people are walking up and ordering 20, 25 cupcakes, easily. Baked by Melissa was featured soon after opening in The New York Times, which drew further buzz.

Melissa kindly gave me this box of 25 cupcakes (a $20 value) and I took them with me on the subway, as you can see by the last photo. I've found that everyone I've given these to seems to have a different favorite!

All photos by Rachel Kramer Bussel; see my Flickr set for more. 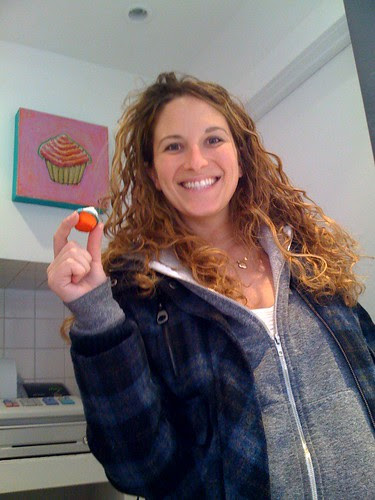 How and when did you get started baking cupcakes?

I always loved to bake. When I was a little girl I stood on a chair to reach the kitchen counter so I could help my mom or dad bake whatever it was that he or she was making.

How did you go about turning your cupcake love into Baked by Melissa?

I got fired from my job at Deutsch Inc. I hated my job as assistant media planner. I tried to love it but I couldn't. When I got fired I felt that it was unjust. I thought it was because my boss just didn't like me. Now I don't really care what the reason was, I'm just happy it happened.

Why did you decide to focus solely on mini cupcakes?

Well, my brother told me to. He told me to start baking my cupcakes as a business the day I got fired (while I was crying in his office an hour after it happened). The next day I met Ben Zion, he is the one who told me to make them bite sized. He is now one of my 4 other partners - all of whom I love. That night Matt Baer, my brother's business partner in Musebox.com and my "brother from another mother" who I have looked up to since I was in high school, designed us the sickest logo and developed the name Baked by Melissa. 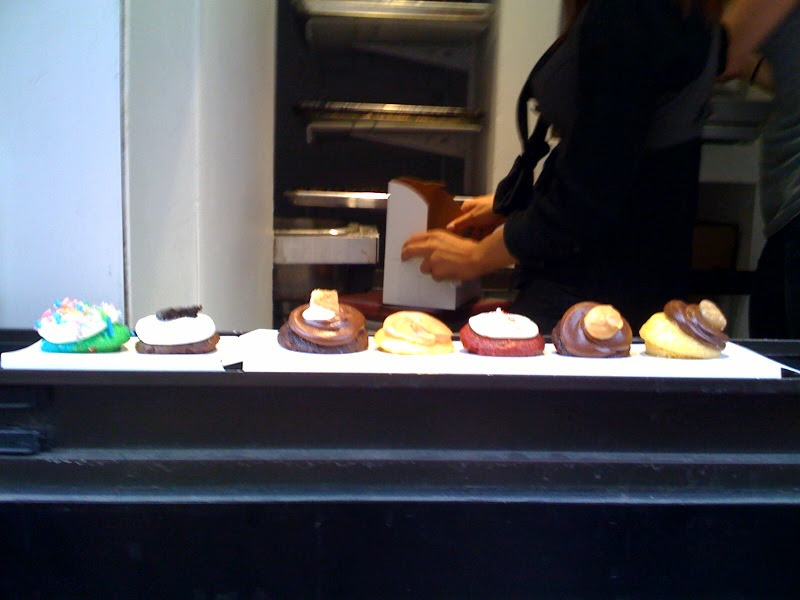 They are stuffed, bite-sized and paperless. Oh - and each one is made with love. 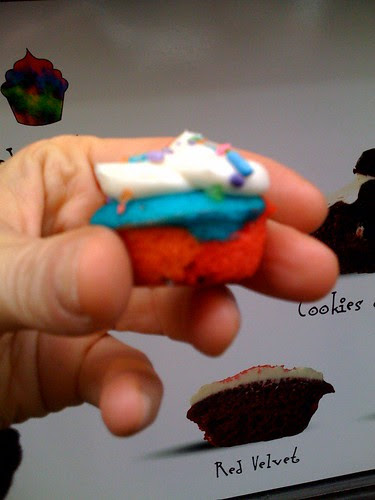 One of your signature cupcakes is the tie-dye cupcake. How did you come up with that one and how is it done?

When I was working at my first job out of college (as a sales assistant at Telerep LLC) one of my colleagues was having a birthday. When I asked him what he was doing to celebrate he simply replied with "listening to music". He loved the Grateful Dead (as do I) - so I went home and made him my very first batch (of what would 2 years later become my signature cupcake) of tie dyed cupcakes.

Which of your cupcake flavors is the most popular? Do you plan to expand your flavor options or offer special flavors?

Would you believe that we don't even have a most popular!? The 3 most popular flavors would have to be red velvet, peanut butter cup and cookie dough (if I HAD to pick) and of course we plan on expanding our flavors! That's half the fun!

You just opened a cupcake window storefront in SoHo’s Café Bari. How did that collaboration between you and Café Bari come about? Are most of your customers pedestrians who notice the window, or people who’ve specifically sought you out?

Our partner Ben Zion of Smart Catering told me I had to bring a tasting down to Cafe Bari in August (it was one of my first tastings), so I went. As soon as Danny Omari tasted his first cupcake he was hooked. He stored me in his cell phone as Cupcake and told me I would be hearing from him often. Little did I know, it was the start of something beautiful. During the first weekend we were open most of our customers were people who read about us in Daily Candy. Now its people who come 3 or 4 times a day or tourists. The pictures of the cupcakes definitely grab passerby's attention. 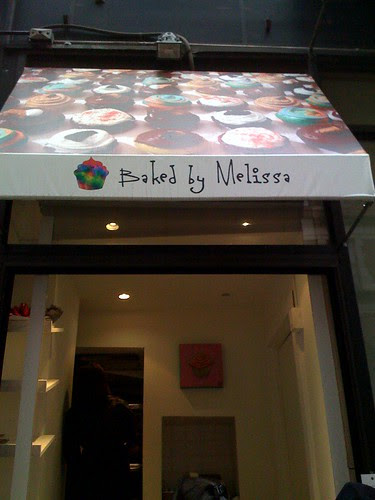 You sold 2,800 cupcakes on a recent Saturday, two days after opening the storefront. Are you constantly baking to keep up with demand? How do you anticipate how many you’ll sell on a given day?

We are constantly baking. I tell my employees that I would rather have to give away extra cupcakes then run out. Believe it or not we still run out of a flavor or two every once in awhile. Either way, as long as the Cafe is open (and even hours that it is not) there is always at least one person downstairs in the kitchen baking cupcakes so we can satisfy our customers.

Do you do custom cupcakes and catering and if so, how far in advance should people book you?

We do make custom cupcakes upon request. We do a lot of baby showers in which pink or blue cupcakes are requested. We also work with a lot of people in the fashion industry who like to order to match new clothing lines. We ask that all custom orders are placed at least one week in advance. 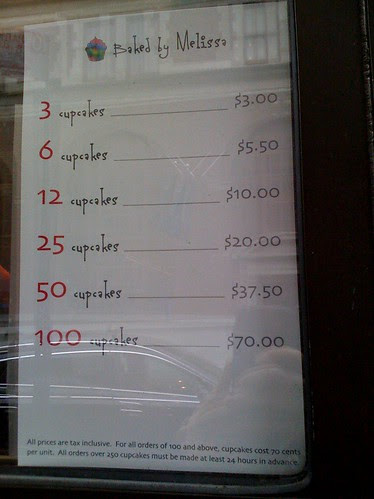 What are your favorite and least favorite parts of running Baked by Melissa?

EVERY PART IS FAVORITE! I love interacting with customers. I love baking. I love going out on tastings and meeting new people. I love the relationships I have built with my partners. I LOVE CUPCAKES!!

What advice do you have for someone looking to start their own cupcake business?

If it's your one true passion, then go for it! Baked by Melissa is the most amazing thing that has ever happened to me. Even if we fail tomorrow I will feel as though it was a success. Everything we have done to date (as a team) has succeeded my wildest dreams! Not only have I learned more than any education has ever offered me, I have grown more in the past 9 months than ever before. I have confidence in myself as a businesswoman, and as a woman in general. If you have a dream or a passion then take the necessary steps to make it happen. Otherwise you will never know what could have been...

What’s next for you?

What is next for us? I promise you will see, and you won't be surprised. 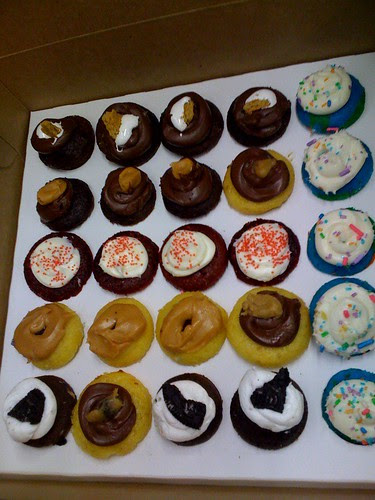 Ugh, everyday. When we started the business I was worried I would get fat. Then I thought to myself "no way, you will totally get sick of them.” Turns out, I haven't gotten sick of eating cupcakes. I think I set my record yesterday, eating about 20 all together. Luckily, being a business owner is very demanding and I spend half the time running up and down the stairs to the kitchen with heavy trays of cupcakes.

Must you ask? You write a blog called "Cupcakes Take the Cake!" 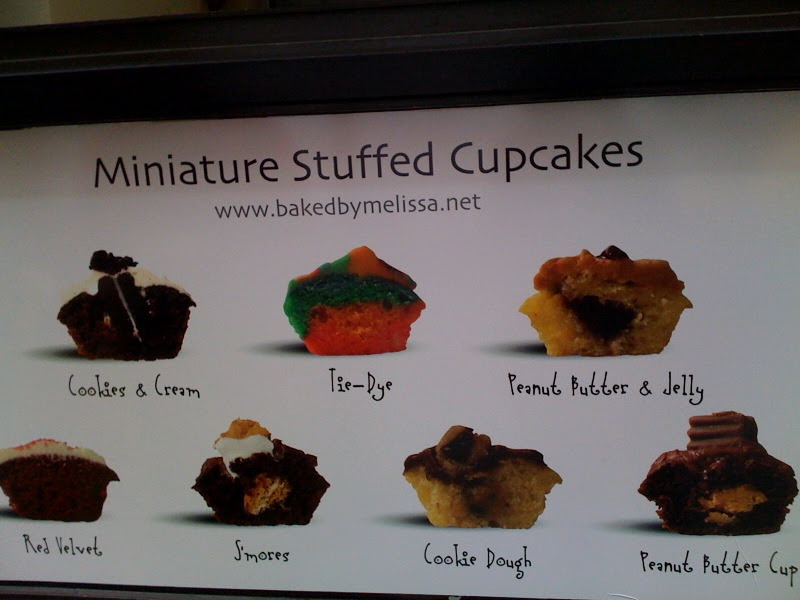 They don't--cupcakes are in a class of their own for me. The day I got fired from my job 6 of my friends came over to console me at different times. Each one of them knew to bring a cupcake.

Is there any innovation you'd like to see made to the cupcake that would improve it for you? -

I think Baked by Melissa took care of that. 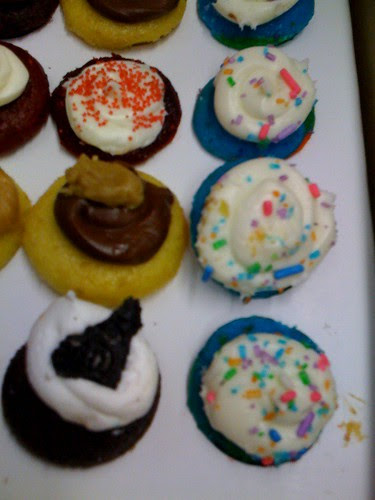 Peeling the top off the hostess cupcakes and saving the best for last.

I love cupcakes! I love my Baked by Melissa family, and I am so appreciative of all of the love and support I have received from my family and friends throughout this adventure. I wouldn't have made it this far with out them! :o) 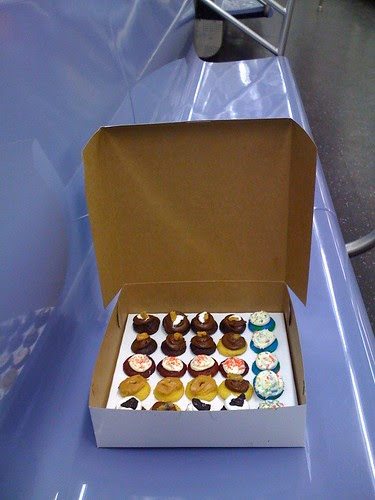 Carrie Middlemiss said…
These all look so delicious! It makes me want to buy an airline ticket and fly out ASAP. I see a trip in my future.

This was a great CTTC interview and an inspirational story. It's amazing what a lot of hard work and passion can get you. Wishing you continued success Melissa.
4/07/2009 3:16 AM

Lara Kretler said…
I visited Baked by Melissa's tiny storefront cupcake window in SoHo and I am hooked. Love the cupcakes, love the unique little window you buy them from, love the tiny size and different flavors - and I love them even more now that I've read her story here. Thanks for sharing this! I'll be posting pics of my birthday cupcakes from Baked by Melissa soon.
5/10/2009 7:53 AM

Unknown said…
I happened upon this storefront in May and nearly lost my mind lol. I'm not a big cupcake fan but my girlfriends and I kept going back. I was ridiculous. These are by far the best cupcakes I have ever tasted. I can't wait until they begin to deliver to DC
10/21/2009 2:57 PM

John Gibbons said…
THE CUPCAKES ARE THE 'WORST' WE'VE EVER HAD, A REAL RIP OFF, NOT SUITABLE FOR ANYONE AT ANYTIME. THE PACKAGING WAS BETTER THAN THE PRODUCT.
3/14/2012 7:44 AM

Heidi said…
To commenter John Gibbons....That's just mean. Don't mess around with someone's livelihood that way. Everyone has an opinion, but you can be kind about voicing it. Btw Melissa, I love your cupcakes! Keep up the great work.
12/08/2013 10:51 AM