CakeWalk: The Savory Cupcake Dilemma of 2009 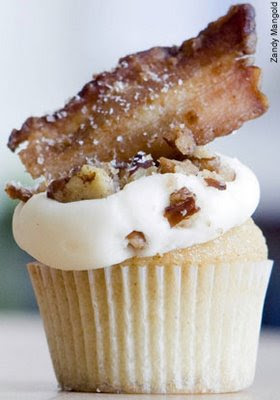 My parents are always a good barometer when it comes to what's cool. For instance, a few weeks ago when my dad said,"Maybe I should get one of those Twitters," I knew that my father had once again proved himself to be a pretty savvy 63 year old. When my mom mentioned that she wanted to start a blog for my family's art supply store, I realized that hey - my parents are pretty cool. So yesterday, when chatting to my dad about what to write for today's CakeWalk column, he said,"Why don't you write about those man cupcakes - you know, the ones with the bacon and eggs in them?"

That's right folks. My dad is right on top of the savory cupcake trend. 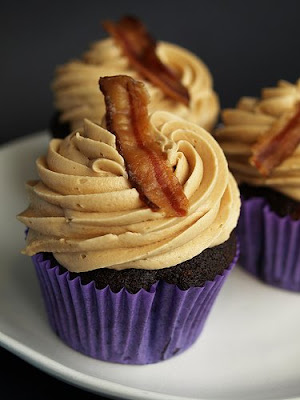 it seems that 2009 has welcomed the savory cupcake with open arms. Countless stories have been written (including wonderful blog posts on Cupcakes Take the Cake) about Bacon Cupcakes, Beer Cupcakes, Pickle Cupcakes - you get the idea. Are these more "unique" treats really tasty, or is this simply a fad being forced on us from the avant=garde baking elite? 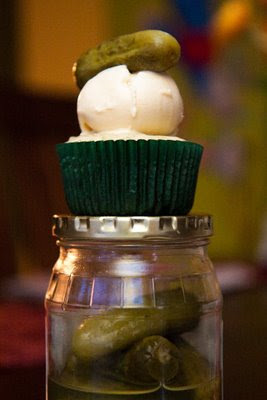 In the beginning, I was a believer that this savory cupcake trend was an obnoxious attempt to cater to the snobbish foodie crowd that makes their presence known in every city. You know the types - the ones that write scathing reviews of restaurants after only one visit, attend every food-related opening (restaurant, bakery, speciality store, etc.), and generally act as a real-life version of Anton Ego from Ratatouille.

But like Anton (minus the pretentious beginnings), my mind was changed by a pair of baking hobbyists (thank goodness it wasn't an adorable animated rat!) who attended CupCakeCamp NYC last April. I knew from their e-mails that Caroline and Katherine were planning something a little different from the rest of the bakers. The girls weren't going to bring your typical sweet treat. They had a plan. They had an idea. A few days before the event, I was warned: The Dudecake was coming. The message seemed ominous - the Dudecake? It's savory? Whoa...wait. There is cheese in this recipe?!

I applauded Caroline and Katherine's creativity, but admittedly, was doubtful that this Dudecake was something I'd actually enjoy. Cupcakes are supposed to be sweet I said to myself. Not filled with cheddar cheese!

When CupcakeCamp NYC finally arrived, Caroline and Katherine were some of the first to arrive, and in their clutches were my potential new archnemesis: The Dudecakes.

"They're made with Newcastle Ale, bacon, and cheddar cheese," exclaimed Caroline.

"Look at the little piece of salad we put on as a topper," said Katherine.

Yep. The second I laid eyes on that tiny bit of lettuce, lying there with a sense of superiority unlike any cupcake topper I've ever seen, I knew my new enemy was upon us. The Dudecake had crossed the line. 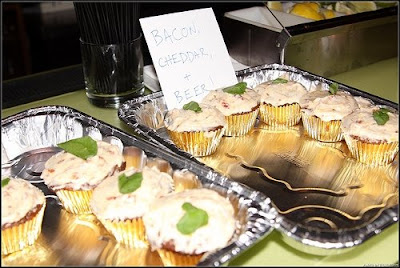 But what can only be described as similar to yelling out "Free Pizza!" to a crowd of hungry office workers around 1 p.m. on a Friday, people flocked to the Dudecakes. As I watched Caroline and Katherine masterfully sell the idea of a savory cupcake to the CupcakeCamp NYC attendees, I thought that perhaps my best attempt to take down this (un)savory baked good was to get in the trenches. They always say that if you want to take down the system, fight it from the inside. That's what I was going to do. I was going to taste this evil concoction and fight the good fight. And I was going to win!

However, in what I would call my greatest underestimation in life thus far, I caught myself licking my fingers and thinking "What just happened?" I had eaten the Dudecake so fast and devoured its tasty and unique blend of flavors before I could even find time to criticize. The Dudecake was actually good. And not just good - but really good.

The Dudecake had taught me a lesson. The cupcake is no longer just a sweet dessert (or in some cases, a snack...or breakfast...or lunch...or dinner). But instead of having our sweet tooth masquerade as our kitchen chef, we can now indulge in cupcakes that are real mini meals. Now don't get me wrong - I love a sweet cupcake just as much as the next person waiting in line with me at Billy's Bakery, but the idea of being able to take my favorite treat and turn it into something I can legitimitely eat for three square meals a day is fantastic. 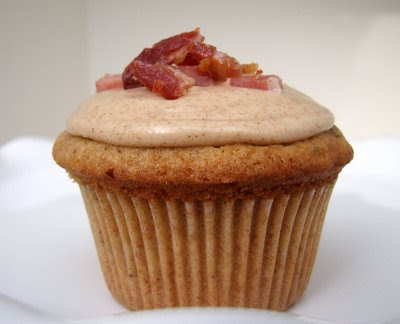 For example, here is a menu I devised:

Lunch: BLT Cupcake (yes, there is a bakery in Chicago that makes a bacon, lettuce and tomato cupcake that has ranch dressing frosting and a slice of heirloom tomato and microgreens on top)

Mid-Afternoon Snack: Carrot Cupcake (it's kind of like a vegetable)

Dinner: Meatloaf and Mashed Potato Cupcake (trust me - it's real. I've included a link to the recipe later in this post!)

And just think - will this type of meal plan, you don't really need to indulge in dessert!

Whether you decide to make your diet an all-cupcake affair, here are some tips for making savory cupcakes:

1.) Be open minded. First of all, if you are willing to try to make a cupcake using ingredients you usually reserve for beef-related items, you are probably already a pretty open minded person. If you can accept that this endeavor is going to be an instance of "try, try again," then you'll be fine. Never apologize for unpleasant cupcake results - you're learning and that's what is important.

2.) Keep it simple. In the beginning, start with a basic savory recipe. Bacon seems to be the major trend, so try a recipe that only calls for a few oddball ingredients. This will help build your confidence so you can tackle your own creations down the road. This recipe could be a good starting point.

3.) Use your good common sense. If something doesn't taste good even without the cupcake factor, then it's most likely going to be 10 times grosser in cupcake form. For instance, sardines and peanut butter will never taste good (at least in my opinion). So how would a peanut butter cupcake topped with sardine taste? Disgusting, that's how.

Lastly, for those of you interested in a weekend baking adventure, here is the recipe for the earlier mentioned Meatloaf and Mashed Potato Cupcakes. Good luck, and remember - once you can master a cupcake recipe that calls for onions, anything you try after this will be a cakewalk.


Mary Ann is the founder of the New York City chapter of CupcakeCamp NYC, an ad-hoc gathering born from the desire for people to share and eat cupcakes in an open environment. She is also the founder of Puff and Choux, a blog dedicated to the pastry and dessert arts. You can contact her at mary_ann_porch@hotmail.com with any questions, ideas or just to chit chat. You can also follow her on Twitter at @MaryAPorch.
bacon bacon cupcakes CakeWalk cupcake cupcake recipe Mary Ann Porch savory cupcakes

Stef said…
Interesting and comprehensive post. I really enjoyed it. As the creator of the pickle and ice cream cupcake and the recipe for the beer, cheddar, bacon cupcakes that I think is the one you tried (although they may have changed it), I can tell you that my goal has never been to create savory cupcakes. Rather, I want to take a food that is traditionally thought of as savory and present it as something sweet. I think it's interesting to take a flavor like pickle that you don't associate with dessert, mix it up with a good deal of sugar, and make it a dessert flavor. It's just a fun game for the taste buds.
5/12/2009 12:28 AM

Mary Ann said…
Hi Stef - It's really interesting to hear your inspiration for your creative cupcakes. Any other unique concoctions in the works?
5/12/2009 4:26 PM