The not so great Rebecca Taylor cupcakes at Billy's Bakery

Posted by Rachel on May 10, 2009
Update: For a different take, watch our video taste test of the Rebecca Taylor cupcakes here. 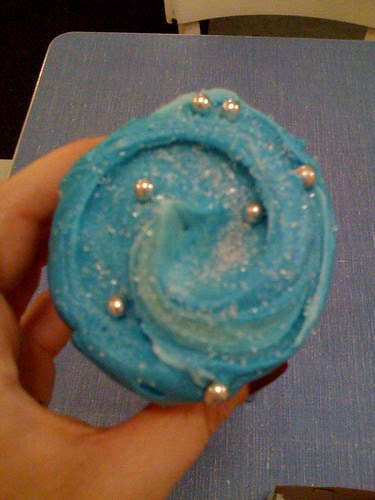 I went to Billy's Bakery in Chelsea (NYC) last Saturday and tried the Rebecca Taylor cupcakes that all the local fashion blogs are raving about, and I have to say...they weren't that special. Or delicious. Or anything really except pretty. They weren't bad, mind you, but they weren't good.

First of all, Billy's consistently has a problem with the dryness of their cakes. I want to like them, but the best one I've ever had there is chocolate cherry, because there were cherries in the cake, keeping it tasty and moist. So the chocolate one wasn't too exciting and just tasted like your average chocolate buttercream, with sprinkles and some sugar on top, and a very dry chocolate cake. 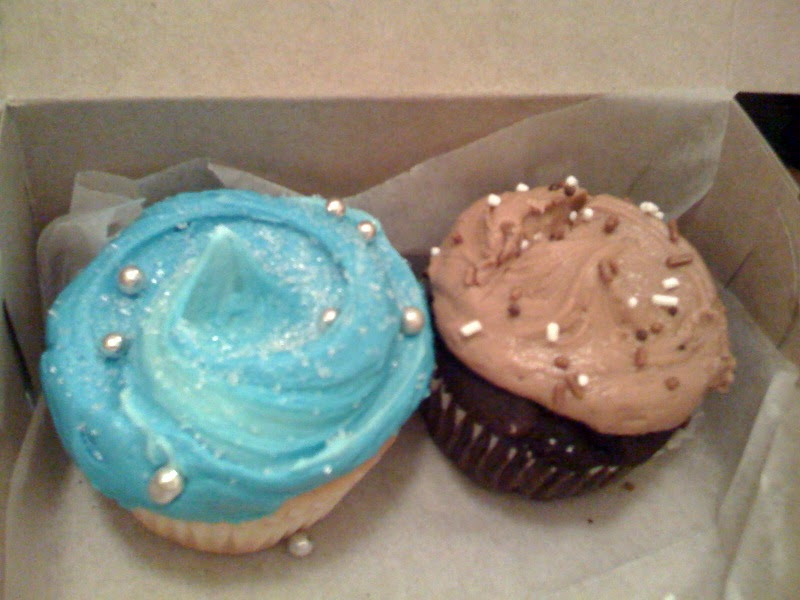 The vanilla one, though, Vanilla Twinkle, was fun. I don't think I'd ever eaten dragees, the little silver balls, before. They were crunchy, and made me a little nervous I was gonna break a tooth. They look pretty but I wouldn't go out of my way to put big dragees on my cupcakes. What worked with both cupcakes was the sugar crystals as decoration/added crunch. Still, I also got a regular vanilla buttercream/chocolate cake cupcake to compare, and same thing: frosting was okay but way too sweet, cake was very dry.

I want to like Billy's, and I keep trying them, but they are not worth going out of your way for at all. They told me that the new Billy's Bakery location will be open around the end of the month or early June. I know Billy's has some major devotees, who feel about Billy's the way I do about sugar Sweet sunshine or Butter Lane or Sweet Revenge, so maybe when I get my new flipcam I will head over there one weekend and do some street interviews, and further taste testing. Even bakeries whose products I don't love, I'm happy to keep on trying. I was hoping to taste their lemon cupcakes, but they didn't have any the day I visited.

They were also offering these little boxes, which I think are $3.25 with a cupcake (in other words, $3.25 for the cupcake plus box), but I have to double check next time I'm there. 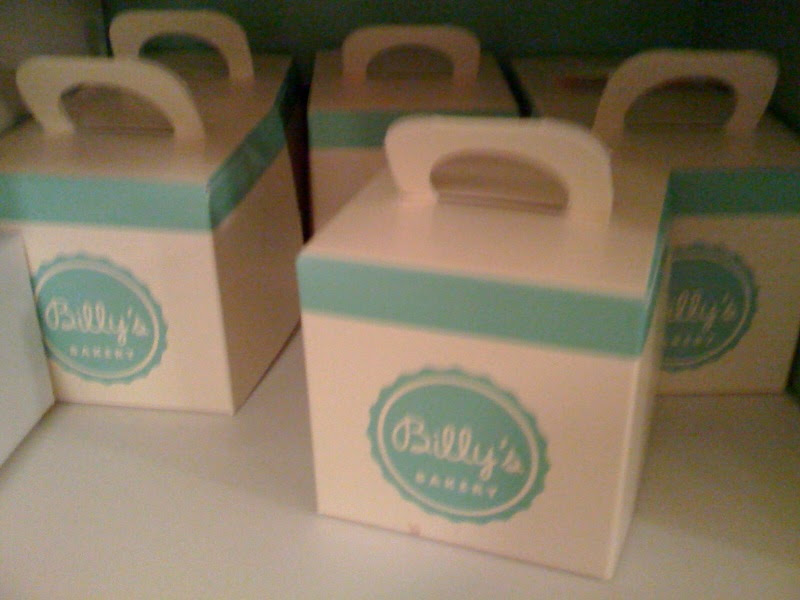 Here's what Billy's Bakery told Crain's New York Business back in January about the Tribeca location:

Tribeca might be a new hot spot for actress Katie Holmes. Billy's Bakery, whose cupcakes Ms. Holmes has publicly embraced as her favorite, recently signed a 10-year lease there for its second location.

The shop is taking 1,200 square feet at 75 Franklin St., between Church Street and Broadway. The asking rent for the ground floor was $80 a square foot. The lease includes a 1,200-square-foot storage basement.

The new location, which is expected to open for business in April, is nearly double the size of the West Chelsea digs occupied by the existing Billy's Bakery. Co-founders Wayne Dovan and Marc Lino plan to sell more breakfast items and coffee, along with traditional baked goods.

“It's a neighborhood location and very central,” says Mr. Dovan of the TriBeCa space. “We like it for the downtown residential, business or office, and tourist environment.”
Billy's Bakery cupcake bakeries dragees fashion New York Rebecca Taylor vanilla

Starla said…
you sound like me when it comes to magnolia. actually, scratch that. no i've tried magnolia twice and hated it both times. i think the place annoys me even more simply because there is SO much hype surrounding it. i want to scream, wake up people! don't eat it just cause it was on sex and the city! it really is NOT that good! the frosting is so sickeningly sweet and the cake part isn't good enough to save it either. but i've turned this into a rant. lol...sorry! :)
5/10/2009 11:02 PM

Kayleigh said…
I second Starla on that as well; I haven't tried Billy's yet but taste-testing is definitely a must as opposed to believing all the hype behind certain bakeries.
5/11/2009 7:56 PM

Linna said…
I totally agree with you about Billy's. Let's throw Magnolia's into the mix, too. I wanted to like their cupcakes, but they were tasteless and dry.