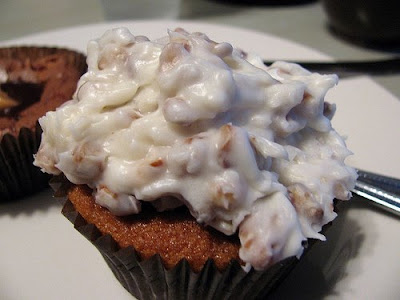 Oklahoma City's Cuppies & Joe whips up The Don, which features an Oklahoma delicacy - the pecan - in both the cake and the icing (Photo courtesy of Cuppies & Joe)

As someone who fancies herself a foodie, even though I hate that term, I was thrilled with the reaction to last week’s column. The comment section was ripe with stories about people’s experiences, or lack thereof, with the controversial dragées cake decoration, and I was reminded why I love writing for blogs: I always end up learning something from my readers and get a small glimpse into their lives. I’m glad so many of you have an opinion on cupcake sprinkles, just like me.

Based on the feedback I received from you, the reader, I’ve put more thought into the idea of regional foods. As you already know, as an Oklahoman I grew up decorating with (and eating!) silver dragées. And whether I liked it or not, I was also destined to be a major supporter of other regional food items because of my birthplace: pecans, pralines, Sonic Drive-ins, Braum’s Ice Cream and really, really, really good pancakes thanks to Beverly’s (seriously, this diner will knock your socks off, as will the 150 year old waitress that still insists on wearing a bee hive wig every day).

If you’re a New Englander, you probably don’t have a slightly obsessive compulsion to eat pecans or pralines, much less wake up in the middle of the night with a hankering for Sonic tater tots, but if someone drops a jar of Marshmallow Fluff within a 200 mile radius of where you stand, you get a bit of a shiver. 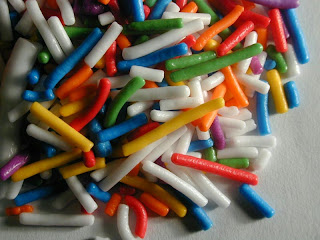 In Rhode Island, a sprinkle isn't a sprinkle. It's a Jimmy (Photo courtesy of Alibaba)

While visiting Portland, Maine, last February, I couldn’t go 10 feet without hearing about the deliciousness of fresh Maine blueberries. Of course, Florida has its oranges and Georgia has its peaches, and there are many, many other stereotypes I can point out, but this column can’t go on forever.

Despite the fact that I'm not a fan of stereotypes when it comes to most things, when it comes to food regionalism, I think it's important. As an Oklahoma expatriot, I still take great pride in the pecans the state produces. I know a quality pecan when it crosses my palate, and I credit my upbringing with my ability to spy a tasty specimen.

It's the other memories I have tied to pecans too, such as the road trip with my dad to the pecan farm years ago where drove at least two hours to spend 10 minutes buying pecans (they are that good!) and then stopping off at Robinson's for delicious sandwiches. As an adult, I can't eat a tasty crab claw without thinking of the summer holidays I've spent with the Adams family in Rumford, Rhode Island, although I hesitate to say I'd ever eat a crab flavored cupcake. Food can be a powerful, emotional, and lovely collection of memories if you let it.

I bring this up because while hanging out with my sister in Oklahoma City last week, we stopped by a cupcake shop called Cuppies & Joe. I was excited to learn that the shop is owned by two sisters I went to high school with - Elizabeth and Megan Diefenderfer. The shop was great, and so were the cupcakes. I tried the Lemony Snicket (lemon cake with lemon buttercream) and was an instant fan. The buttercream icing was fluffier than other types I’ve tried, such as at Billy’s Bakery or sugar Sweet sunshine, and was definitely easier to digest in warmer temperatures than what I’ve tried at other bakeries. 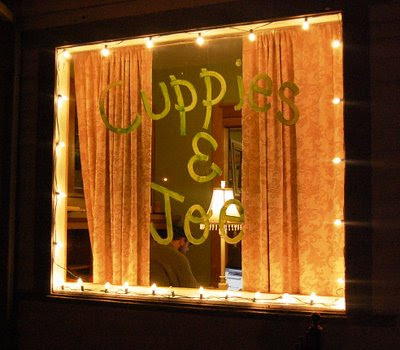 Cuppies & Joe is one of Oklahoma City's first cupcake shops

Also, I noticed that two cupcakes on the menu featured a native Oklahoma delicacy – the pecan: The Resolution (chocolate cupcake with brownie consistency topped with chocolate, caramel, and pecans) and The Don (Italian cream cupcake with cream cheese icing, with pecans and coconut in both the cake and icing). As someone who eats a lot of cupcakes, I was delighted to see a cupcake that featured pecans as it's not something I've ever seen before.

This got me to thinking: how many of us are harboring secret knowledge of regional cupcake recipes? Can Mr. Adams in Rumford whip up some seafood flavored cupcakes? If you know Mr. Adams, the answer is probably yes - he would certainly give it a try. What about one of our Georgia readers with a special knack for peach flavored treats? I know that Atlanta's Sweet Pockets Cupcakes has a Peaches and Cream cupcake listed on their menu. And I have a hard time believing that Texas doesn't possess some recipes that are larger than life, because as we all know, everything is bigger in Texas.

So in the spirit of everything we grew up loving as kids simply because of our origin of birth, I give you a recipe that reminds me of my hometown, and I’d love for you to share your hometown inspired recipes in the comments section. Let’s see how many places on the globe we can check off with a cupcake recipe. I've started the list with Oklahoma and some delicious praline cupcakes. Now, where are my New Englanders with some Marshmallow Fluff topped treats? Somebody help us if we go the savory route and see any buttercream mixed with clam chowder…

With a little help from your fellow readers, who I consider friends in an Internet sort of way, learning a little bit more about each other through shared recipes and our love of everything cupcake is as easy as a cakewalk.

Panhandle State Praline Cupcakes – not even a tornado could stop the tasty action of these bad boys!

Cake:
Cream softened butter in mixing bowl. Sift in flour, sugar, baking powder, and salt. Add about half of the milk and the egg; mix until flour is thoroughly moistened. Beat for 2 minutes. Add remaining milk and the vanilla; beat 1 minute longer. Stir in chopped pecans. Place paper baking cups in muffin cups and fill about 1/2 full with the batter. Bake at 375° for 25 minutes, or until cupcakes spring back when lightly touched with finger.

Topping:
Combine melted butter and brown sugar; spoon over hot cupcakes. Place a pecan half in the center of each; return to oven and bake 5 minutes longer.


Mary Ann is the founder of the New York City chapter of CupcakeCamp NYC, an ad-hoc gathering born from the desire for people to share and eat cupcakes in an open environment. She is also the founder of Puff and Choux, a blog dedicated to the pastry and dessert arts. You can contact her at mary_ann_porch@hotmail.com with any questions, ideas or just to chit chat. You can also follow her on Twitter at @MaryAPorch.
Atlanta CakeWalk cupcake recipes Cuppies and Joe Georgia Mary Ann Porch Oklahoma Oklahoma City praline recipes regional recipes Rhode Island Sweet Pockets

Sugar Daze said…
Great post! There are so many regional specialties and I love seeing the inventive bakers who come up with ways to use local "exotic" ingredients.

I grew up in NYC (never been to Rhode Island) but still call them jimmies. Doesn't everyone?

Here in France, I stock up on caramel de fleur de guerande/beurre sale and it's made its way into more than one of my cupcakes. I also find myself reaching for the bottles of sirop that kids mix with water from time to time to flavor buttercream. They come in all sorts of cool flavors like cotton candy, violet, banana-strawberry.