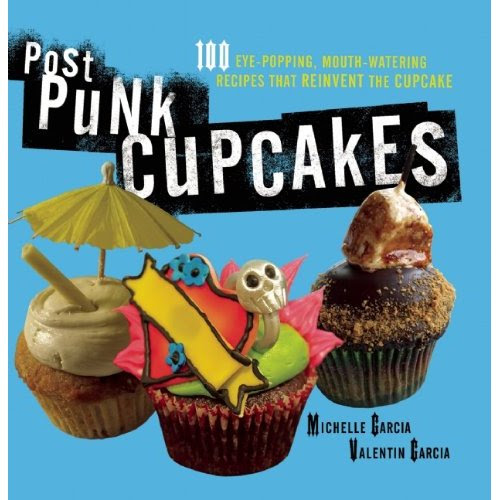 Cover of Post Punk Cupcakes: 100 Eye-Popping, Mouth-Watering Recipes that Reinvent the Cupcake by Michelle Garcia and Valentin Garcia (co-owners of Chicago's The Bleeding Heart Bakery). We have to wait until February 2010 for Ulysses Press to publish it, but in the meantime, we can ogle The Bleeding Heart Bakery's Flickr account, which is frequently updated and always stunning.

They've just posted on Flickr their August 2009 cupcake flavors and wow oh wow are they amazing. Like, I might have to make that trip to Chicago in August just to try them amazing.

I'm having trouble grabbing the code to post, so do check them out because they make me salivate. 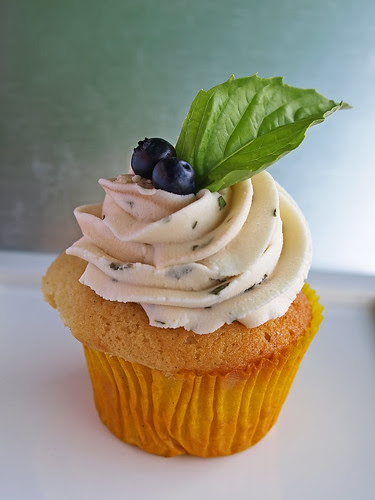 Here's what they are:

At first glance I thought Isa Chandra Moskowitz made a sequel to her previous cupcake book.
7/30/2009 7:21 PM

Anonymous said…
Yes, "post punk" is used outside of the culinary realm. I think it's weird, though, since the Bleeding Heart Bakery markets itself as a punk rock bakery. Why, then, wouldn't they name the book "Punk Rock Cupcakes?" The it's not like Post Punk is a more popular or buzz-y term than Punk Rock, so I don't understand why that particular term would be chosen for the book unless it was to encourage shoppers to associate it with the very popular Post Punk Kitchen franchise...

In any event, whatever the reason, it's confusing, and I would think all the authors involved would want to avoid that!
7/31/2009 1:07 PM

Dave said…
This is an absolute ripoff beyond belief. Yes Post Punk is a fairly well used term in music circles, but I can't find a single example where a music genre was associated with baked goods until the Post Punk Kitchen started as a public access television show and the two hosts published the first Post Punk Kitchen book about...you guessed it, Cupcakes!

Even the artwork both on this blog and the book itself are of a suspiciously similar aesthetic.

There are a million and half names related to music that one could name this book, but they instead are choosing to cash in on a top selling line of Vegan cookbooks, and arguably one of the more famous baking books in the last 5 or so years.

There is simply no way to even defend this as purely coincidence, as at least one commenter has suggested, maybe if the term Post Punk had permated the baking world to a significant extent, but at this point, it absolutely has no.

Dave said…
I would like to retract part of my comment, as I initially thought this blog was associated with the bakery the authors of the book own, which it is not. My apologies.

Unknown said…
Thank you all for commenting. WE HAD NOTHING TO DO WITH THE TITLE. We were simply asked to write down the recipes for the cupcakes that put us on the map. I did not choose the title nor did I choose the typeface or art work. This is not a biography and it is not about my life, my family or my bakery. It is a bunch of edgy cupcake recipes.

We respect the Post Punk Kitchen very much and have had absolutely no intention on insulting anyone or ripping anyone off as we were commissioned to write recipes for a book which had already been established. We are "filling in the blanks".

I would have no problem with any of it changing and I would email the publishers if you feel the same way.

Mike G said…
I wonder what Post Punk Kitchens have to say about this? So, in regards to the bakery post, you just gave these people your recipes without knowing much detail on the book? really, who does that? I guess the "new" punk will do anything for money. I just don't see that happening.
7/31/2009 8:22 PM

Obviously I did not sign my recipes and obvious livihood away without knowing something about it. However, it was a working title and to your comment about Post Punk Kitchens, you are right, they probably are angry. That was my point in posting. I also emailed them personally to apologize, even though I did not know anything about the release of the book so early and thought it was still a work in progress as I am still writing it.

Calling me "new" punk would insue that I was young. I haven't been called young or "new" in about 15 years (so its sort of flattering) and I didn't realize I had t prove my "punkness" to anyone at this point in my life.

I would encourage you to actully learn something about me and who I am before you attack my "punk" integrity.
8/01/2009 3:50 AM

Mike G said…
So you had no idea what the title was when you agreed to this? The title could have been called, "75 Yummy Recipes Using Poop !" and still, you would have no control over it, yes/no? That just doesn't make sense. All I am saying is that before you agree to something, you do some digging before agreeing. If you weren't doing it for money or some sort of publicity (?), you would have thought that the name would be a bad move. That's all. PPK will get the real benefit when or if people search for the title and it comes up with their site.
8/01/2009 5:43 PM

Mike G said…
Thank you Bake and Destroy for clarifying. It just opens the door a little wider. This bakery is taking YOUR turned down opportunity and the NAME of YOUR site for a tv show? Can they come up with their own ideas? you should be very flattered.
I really love your site. I think you should do something big! I know that with a family it is harder and hats off to you for being a super mom!
Good luck with your work!
8/01/2009 5:47 PM

Unknown said…
In regards again to Mike G, it seems that you are missing the entire point of Natalie's point and although I do not wish to argue further with you as it seems you just do care for me very much (which is perfectly fine) I would just like to clarify.

1. The book had a working title when the publishers approached each of us INDEPENDANTLEY. Neither of us knew of the others affiliation until I was already writing the book. A working title is given to something "in the mean time" until they decide on the actual title. The name of the book when it actually does come out will not be called post punk cupcakes, the cover was released pre-maturely and my publisher will be publicly apologizing for that.

2. Natalie and I are working on a show TOGETHER which Planet Green called Bake and Destroy without speaking to either Natalie or I. I contacted both the producers and Natalie when I saw the press release and we demanded that it got changed, which is happening as that, as well, is a working title (it even sais working title next to it in the press release).

3. I am sitting in 1 of 2 bakeries opened by with my husband 6 years ago surrounded by over 400 unique pastries I wrote the recipes for on my own. I make upwards of 10 wedding cakes a week which get designed by me and I am wearing a t-shirt designed by my husband in a room designed by my husband. I'm pretty sure we have enough ideas on our own to get by just fine. Again, you should do some research before publicly attacking someone you know nothing about.

4. It is really sad that you think it is all about the money. Maybe that is how you live your life. Personally, I do not pay myself for any of my work. Pastry makes me happy, not money. I donate our profits beyond what we need to pay bills and we work with several different charities. I will not be making a dime off the book as I have already committed to donating that as well.

Mike G said…
Ms. Natalie, It's a great title! Careful, if you say that you like it and want to use it, Michelle may beat you to it! Girl, keep your good ideas to yourself! Don't let anyone ride on your coat tails (or opportunities). I am so serious girl, you are something. I really think that YOU are the one that should be in the spotlight. I mentioned your site to someone the other day and they said that you are just fabulous! Go big! but don't exploit yourself or sell out. Good luck girl.
8/05/2009 7:29 PM