Posted by Rachel on August 28, 2009
This interview was done by our events intern, Melissa Zhang. 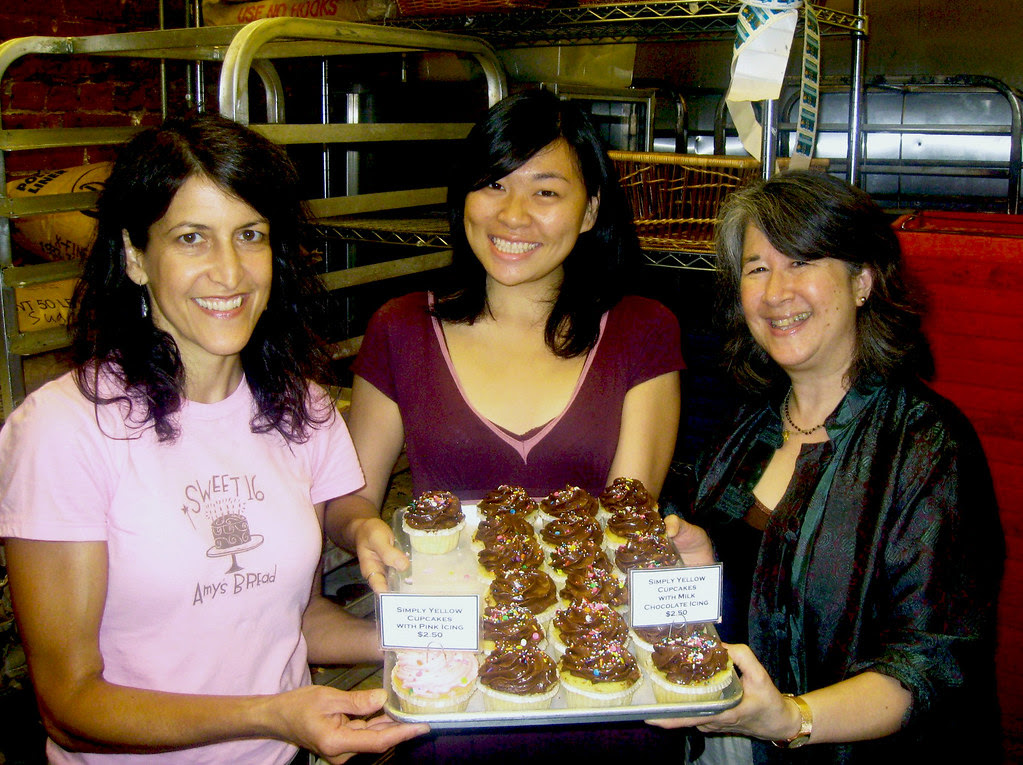 Upon first entering the cozy interior of Amy’s Bread, your attention might be drawn to the warm smell of fresh baked goods drifting over from the kitchen or the bountiful display of breads and pastries. If, however, you squeeze between the constant flow of customers and look closely, you’ll find a dedicated shelf section for cupcakes. I had the pleasure of conducting an interview with the head staff over at the original Hell's Kitchen location, to focus not on their famous breads or cakes, but specifically the cupcakes this time.

How did you get into baking, and how did you come to work at Amy’s Bread?

Toy: I remember my first cookbook from when I was seven years old. It was Fanny Farmer’s Cookbook and I made peanut butter cookies. We actually use a modified version of that same recipe here at Amy’s Bread. As for how I came to be here, I became tired of the computer world and left to go to culinary school. I worked with Amy at a restaurant and learned how to bake bread from her. When she started her own store, I was right there the first day.

What flavors of cupcakes does Amy’s Bread offer? I see that online, it just says “Selection changes daily." 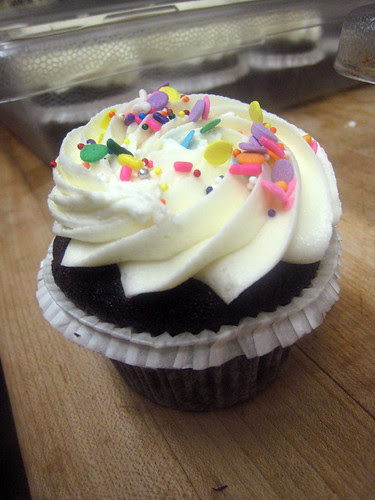 A freshly made Black and White cupcake

What would you say makes Amy’s Bread’s cupcakes unique?

Toy: Often with cupcakes, because they are so small they dry out. It is difficult to make a small moist cake. Our cakes have a tender crumb, and are lighter.

Who came up with the first cupcake recipes, or rather, what was your inspiration?

Toy: The cupcakes are made from our regular cake recipes with slight variations to maintain moisture. The vanilla is usually the same, but we had to go through a lot of cake development to keep the chocolate from drying out.

How do the cupcakes compare with some of the more famous products in the store? Is there a following for the cupcakes like there is for the breads and cakes?

Toy: Oh, sure. We’ve had customers think that we’re “Amy’s Cakes” instead of “Amy’s Bread”! New Yorkers are enamored with cupcakes. When we branched into sweets, it was a natural segue to do cupcakes. It’s all about the kid in you. With regular cake, it’s more about the cake. With cupcakes, it’s about the frosting. The proportions are different.

Amy: We once tried to reduce the frosting because it was affecting packaging, and so many people complained that we had to restore it!

Are there any requests for new cupcakes? Do you make any special cupcakes on the holidays?

Toy: A lot of customers call and ask for other flavors, such as lemon or carrot cake. But there’s just so much that goes into production that we think it’s too much to handle right now. We do put festive colored sprinkles on holiday cupcakes.

Are there any cupcake recipes in your new cookbook, The Sweeter Side of Amy’s Bread, or it just cakes?

Toy: There is a section at the end of the cake recipes that offers adjustments if you wanted to make it into cupcakes.

Why do you think cupcakes have become so popular in the last few years?

Toy: [laughs] I think people like frosting! Cupcakes are mostly frosting, after all. The extra amount of sugar makes you feel better, so you’re happier maybe.

Kerrie, another staff member: I think that cupcakes are nostalgic. We think of childhood. They’re smaller, so they’re like treats. We can eat them on the go, unlike a huge slide of cake.

Now for some personal questions, Toy. How often do you eat cupcakes?

Toy: I eat them every once in awhile. I primarily eat them when I’m doing quality tests.

Toy: You know, I’m not really a cake person. I like our red velvet cupcake a lot though. The texture and the balance is just right for me.

Toy: Let’s just say if you gave me a choice between a pie, a cupcake, and pudding, I’d choose the pie or pudding before it. And I prefer breads over sweets.

That’s curious that you’re the Executive Pastry Chef then. Why is that?

Toy: When Amy’s Bread expanded out of the original Hell’s Kitchen location, we had all this space for new production. We all split up jobs and I kind of became the executive pastry chef by default.

Amy: I’d change the packaging. I want fabulous packaging that’s not horrible for the environment. They are flimsy or they slide around in the box. The good ones are expensive and we don’t want to pass that cost onto the customers. Right now cupcake packaging is just a nightmare.

Toy: I love watching kids decorate their own cupcakes. They have so much fun with them. Their faces just light up.

Amy: Yes, my son Harry brought his class here today for a field trip to the bakery. They all decorated their own cupcakes.

Amy: Come and buy our cupcakes, and enjoy them! 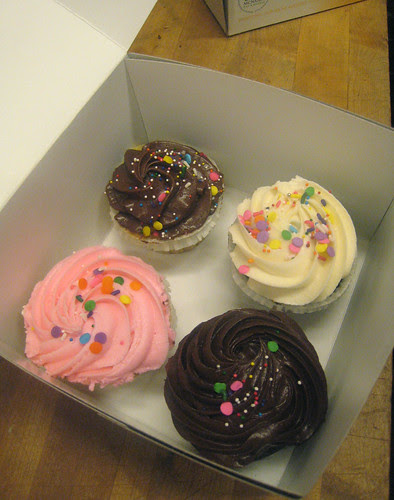 I was offered a variety box of the cupcakes flavors that day, pictured above. Going clockwise from the top, we have the Simply Yellow Cupcake with Milk Chocolate icing, a Black and White Cupcake, Devil’s Food with Silk Chocolate frosting, and the cupcake version of the famous Pink Cake. The main appeal of these cupcakes is that they dismiss the bells and whistles of many modern cupcakes and stick to the traditional aspects that make cake (and cupcakes!) such a nostalgic treat. I found a quote from their new cookbook, The Sweeter Side of Amy's Bread, that I think sums up their philosophy nicely:

"We knew we wanted our cakes to be basic old fashioned layer cakes like the ones our mothers used to make. Simple, but they would have to be delicious."

The cupcakes were indeed, simple and delicious. The buttercream was a purist's dream, and the ratio of frosting to cake was spot on. I have to agree with Amy that the Devil's Food cupcake being "so moist it is like pudding. [They] worked so hard on the recipe and now it's just phenomenal." I was also hoping to try the Red Velvet cupcake but it was not part of the cupcake lineup that day. It simply means I will have to return.

Amidst all of New York's saturation of cupcake bakeries, this bread bakery deserves a visit. Stop by for a slice of bread or any of their other delicious products, but don't forget the cupcakes!

Directions and other branches at Chelsea Market and the West Village can be found here.