Posted by Rachel on August 12, 2009
Cupcakes are making waves on reality TV. Natalie Slater of Bake and Destroy posted about a new Chicago-based reality show Planet Green is doing with her and Michelle Garcia of The Bleeding Heart Bakery, and here's what she wrote:

I’m involved in the show, I know about the announcement, and no, the show is not actually called Bake and Destroy. We discussed possibly using it as the show’s title and decided against it but Planet Green kind of just ran with it as a working title. I mean, it is a god damn clever idea, you have to admit. Long story short - I’m not getting ripped off (at least not yet…), and when it comes time to air the show you might recognize a certain baking blogger you all know and love.

Bleeding Heart is the nation's first totally organic bakery. The bakery is dedicated to delivering organic, sustainable, and delicious food but it's certainly not Betty Crocker's shop. Maintaining order among the tattooed, pierced, and sometimes unruly staff is a major challenge, to say nothing of the difficulties of starting and running a small business. Watch as the unbleached flour flies in this exciting reality series.

And here's what Michelle Garcia of The Bleeding Heart Bakery wrote to us in an email:

We have been working on the show for about a year together with Natalie. It really is reality, which is cool. It basically is about the day to day operations of running this business, trying to stay at the top of our gaming in the eco world, sourcing better and better organic and locally farmed ingredients, employee issues, product integrity, creative development and staying sane with two toddlers on my part and one on Nat's part. Her role is just her being her, bloggingand showing me the computer world of advertising and social media. It's a fun show and so far, looks good. Our question was "would it be something that we would watch if we weren't in it" and after seeing the pilot, we were sold. There were no fake instances or cake orders, nothing that wouldn't actually happen and real customers with real reactions. We threw in a few things for fun on the sizzle, which doesn't air, but all in all, it really is reality. We are hoping that not only does it show how hard we struggle and the hours we work to make this all happen, but also to show corporate America that is we can be "green" as a small business with relatively no money, than they have no excuse why they can't too.

Michelle Garcia also left several comments on our post about her upcoming cookbook, which is listed on Amazon as Post Punk Cupcakes but that title is being changed. From her comment (read the post linked above for the full story):

The name of the book when it actually does come out will not be called post punk cupcakes, the cover was released pre-maturely and my publisher will be publicly apologizing for that.

Speaking of The Bleeding Heart Bakery, I couldn't resist posting a few more of their gorgeous August flavors, via Flickr: 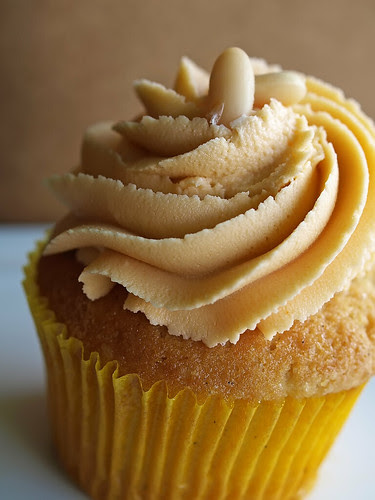 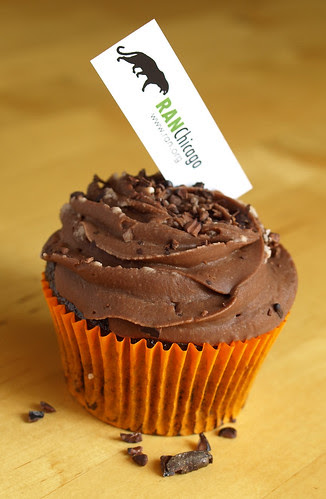 This one is their charity cupcake of the month, with $1 of each sale going to Rainforest Action Network Chicago. Made with Endangered species chocolate to make a ganache filling and frosting.

Speaking of Chicago, when I saw that Sandy of Iron Cupcake Milwaukee is going to Chicago in September to see Jessie Oleson of Cakespy at the Renegade Craft Fair, I knew I had to go. And joining us will be the very awesome and talented Sheela Namakkal of Minneapolis's Miel y Leche cupcake company. It's happening September 12-13 - if there's interest, I'd love to do a little cupcake meetup with local folks, so just let me know. I plan to arrive Friday night and leave Sunday night.

Cupcake queens unite! SO looking forward to it as Chicago has such a high preponderance of cupcake bakeries. I'm scheduling interviews with all the local bakeries/custom cupcake companies I can find, so if you want to be part of it, email me at cupcakestakethecake at gmail.com - I can't wait.
Bake and Destroy Cakespy charity cupcake bakeries cupcake blogs cupcakes on TV Jessie Oleson Michelle Garcia Natalie Slater Planet Green reality TV The Bleeding Heart Bakery

Carrie owner of Bella Cupcake Couture said…
Now this is a reality show I'd be completely into!! Can't wait.

Anonymous said…
SO wonderful! This is great.