Posted by Rachel on August 11, 2009
All info below via URDB (Universal Record Database Blog). Um, can you say exciting? Seriously - cupcake kebabs are already major cool (thanks to Nora who is the driving force behind this kebab quest - click here to watch her talk about making them and here to join the Nibbles by Nora Facebook group) and to make the world's longest one? If you're in New York, don't miss this! For those who don't know, these are cupcake kebabs: 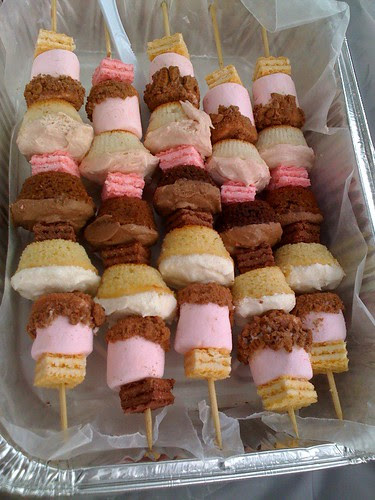 Though recent appearances on Late Night With Jimmy Fallon and at the Pitchfork Fest in Chicago have been fun, we are bonkers with excitement about this upcoming event. Save the date of Wednesday, August 12. It’ll be our first-ever themed night of world records. And the theme? Fooooooood!

“Food records” doesn’t necessarily mean shoving hot dogs down your throat. Past records we’ve documented include Tallest Carrot Cake, Most Names Written On A Dry Piece Of Spaghetti and Fastest Time To Open A Can Of Alphabet Soup And Spell ‘PANTYHOSE’.

* Most Pig Parts Tasted In One Sitting - Sasha Wizansky of Meatpaper, meat from Marlowe & Daughters

The night will open with an ultra-spectacular Food Party screening, to be presented by series creator Thu Tran. Thu and her Food Party posse are lining up a few other surprises throughout the night.

Special guests From Bacteria To Boys featuring the legendary Mike Pride will be our house band, rocking Crash Mansion the entire night.

Cost of event is $5, free if you’re unemployed. Advance tickets are highly recommended, and can be purchased here.