Posted by Rachel on September 10, 2009
I was not shopping for gluten-free cupcakes, or any cupcakes, really, the other night at Whole Foods on Houston Street/Bowery in New York. I was shopping for dinner. And cereal. But as I stopped to peruse the veggie burgers, my eyes caught on the frozen gluten-free section and saw these vanilla cupcakes: 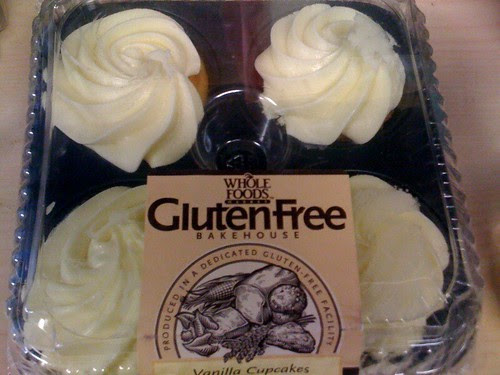 I of course had to try them. I don't have my receipt in front of me but I think they were $6.99. I froze them and then had them out for a few hours before I ate them. The frosting was very thick and there was a lot of it, so much so I had to take some off, but it was very good. Buttery but not too much so for my taste. The cake was pretty crumbly. Not as bad as I've seen and not horribly crumbly, but more than one would hope and also a bit dry. The only other gluten-free cupcakes I've had were from BabyCakes NYC and those are a lot denser than this cake, and I prefer the less dense kind. With the frosting, it was a good combination. The cake's taste was pretty good, on the lighter side taste-wise.

These are Very Large Cupcakes, rivaling the size of Crumbs, I'd say, so unless you are truly jonesing for your very own cupcake, plan to share one, or save some of it for later.

I think, as someone who can eat gluten, I feel like I would only truly recommend these to people who are gluten free, or if you really need a cupcake. They aren't bad, but they could be a bit more held together.

Whole Foods also sells a chocolate cupcake version which I didn't see at this location, but I'd love to try that one and compare. 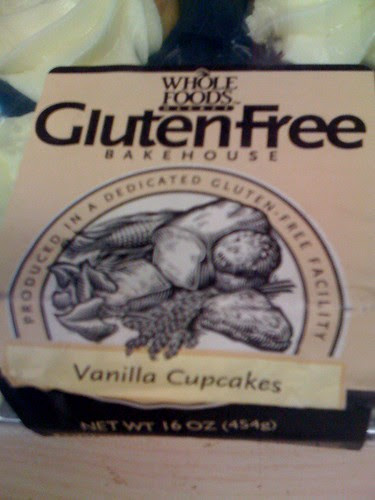 Here's what Cutie Cake Cafe had to say about them:

I kept them in my refrigerator all day and finally have had a chance to taste one. The cake is a bit on the crumbly side, but it is moist enough (it’s a bit dry, but not overwhelmingly so) and full of vanilla flavor. It tastes like vanilla bean, too, not vanilla extract! The frosting is a lovely vanilla buttercream with a light hint of lemon. Really, when I take a bite of the cake and the vanilla together and I greeted by a lovely, full vanilla bean flavor. So enchanting!

You know, each time I take a bite, I think that it’s too dry, but by the time I’m swallowing, I’m thinking of how amazing the vanilla flavor is. I’m not sure if I will buy these again, but I’m glad I got to taste them this time. :)

I love vanilla cupcakes and I thought being gluten free I would never tasted that flavor again. These cupcakes are extremely close to what I loved about vanilla/vanilla cupcakes. I am happy I found these. The texture is good too. For a gluten free cupcake these are more than just good they are great. Try 'em! The price is high I only get a pack once a month. $7.99

I am eating some right now! 470 calories per 4oz cupcake but I take off more than half of the frosting so I hope that helps the calories. I know dream a dream but being gluten free