Posted by Stacie Joy on October 27, 2009
This is an old(er) show, but I've been home sick for ages now and spend too much time watching Food TV Network (as well as CNN, MSNBC, TLC and NY1). Last night I was excited to see Bobby Flay do a cupcake throwdown. Cupcakes! Yes! 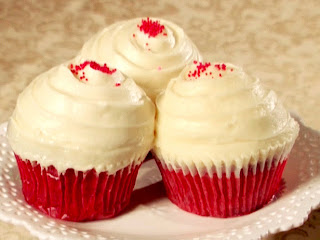 I have to say, even though gingerbread is not my favorite, the caramelized mango buttercream looked to die for! Terry's cupcakes were very moist (something that was mentioned at least ten times during the show) but are not traditional chocolate red velvet cupcakes. They are buttermilk cupcakes with a touch of cocoa powder. Also, they are heavy into food coloring. I prefer natural coloring, like beet powder. But I will say the red velvets looked very good. The frosting was piled up with pretty sprinkles on top. A perfect picnic cupcake, in my opinion. 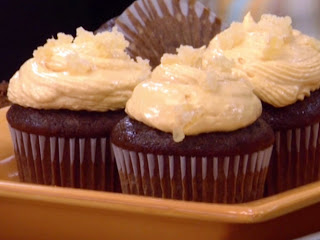 
Shockingly, to me at least, Bobby Flay won. I am not a Bobby Flay fan, sorry to say. I've met him a couple of times, not that he'd remember me, but he's never been a particularly nice man in my opinion. Regardless, he's an excellent chef and I have respect for his skills.

His cupcake was pronounced "unique and unusual" by the judges as opposed to a more traditional old-school cupcake like Terry's modified red velvet.

I think the cupcakes were judged on 3 factors: moistness, flavor (combo), and frosting.

I would love to know what Clare and Candace really thought and how the show really went down. I've been behind the scenes for enough reality-style TV shows to know that what you see is not always what occurred. So, Clare and/or Candace, if you are reading this, write in and let us know what the truth is. Enquiring minds want to know!

Cara said…
So, not like I'm a massive Bobby Flay fan either (though man, I love this show!) but since I discovered the Food Network in 1999, it's been a staple wherever I've lived :) And I've never met Bobby Flay, either -- but I feel like he's gotten much more mellow (read: waaaay less arrogant + rude) in the last couple of years. Uh, of course, this is all I've gathered from watching him on tv :D -- but I don't know, I remember back to a couple stunts he pulled, and it seems like he's gotten much more mature/mellow/I don't want to say humble, but who knows :D I want to attribute that to his wife Stephanie March, but I have zero idea how long they've been married :D (ooh, wiki says since 2005! hee) Anyway, sorry this is so long! But I just had to jump in :D And also say that it does break my heart when Bobby beats a longtime/life-committed chef/baker -- like the NY red velvet cake lady, did you catch her episode (whoops, sorry for that spoiler!) A-hem -- love the blog + the happies through the day!
10/27/2009 10:10 AM

Jenn McKinlay said…
I saw that episode and loved it. Terry is a sharp cookie and knew something was up. I liked that Bobby was stymied by how she got her cupcakes to be so moist (veg oil instead of butter). Great episode. My vote was for the red velvets, too.

Rebecca said…
Bobby Flay is my least favorite Food Network Chef! I've never appreciated how such a talented chef thinks it's okay to have a throwdown with people who have one claim to fame. I wouldn't eat his cupcakes, but that's because I don't like the flavors he picked! They seem pretentious! Red velvet is not my favorite either, but there's something very comforting about them. Perhaps it's their name :) Once I sold Bobby Flay's wife, Stephanie march, iced lattes!
10/27/2009 3:29 PM

Unknown said…
I second what CaraBella said, he does seem to have changed over the years. We had the Food network about 6 years ago, but canceled because we weren't watching that much. Back then I couldn't stand him. We signed up for it again just recently and I was stunned at how different he seems.
Regarding the show... it's actually very rare that he wins the competition, so it was a shocker that he one that one. I definitely could not vote against red velvet! :-D
10/27/2009 4:54 PM