Posted by Rachel on November 19, 2009
Yesterday I stopped by the Crumbs Bakeshop in Midtown Manhattan, near Grand Central. I like to see what new flavors they have...but I wasn't expecting to see calorie counts next to them! I'm assuming it's part of New York City's calorie count law

The carrot cupcake seemed to be the one with the most calories: 600. 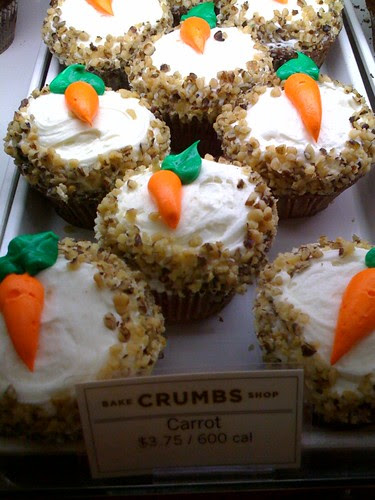 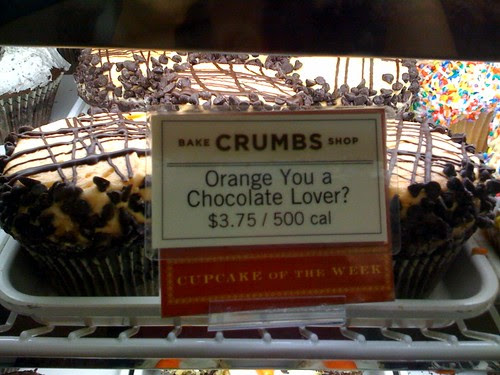 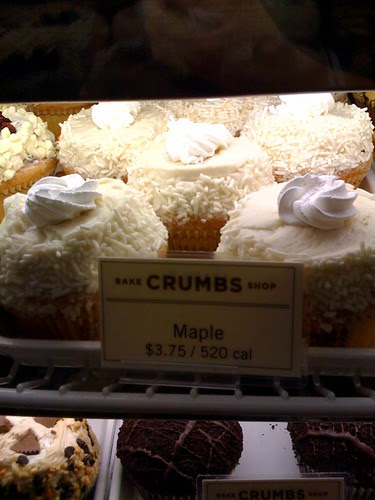 The most fun cupcakes, Love at First Bite: 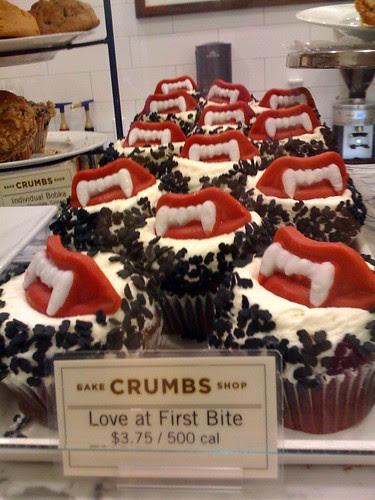 I bought an assortment, which included coffee toffee (filled, very gooey), chocoberry, chocolate pecan pie and the Love at First Bite - $15 for the 4 cupcakes. 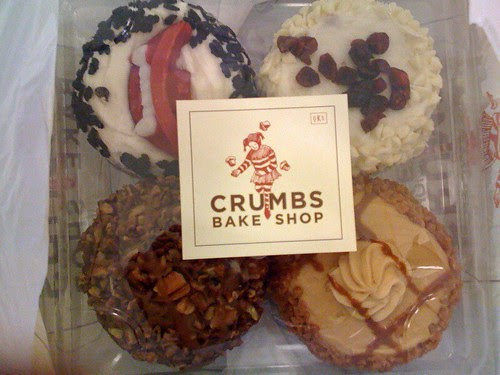 The smaller ones are a bit more manageable calorie-wise: 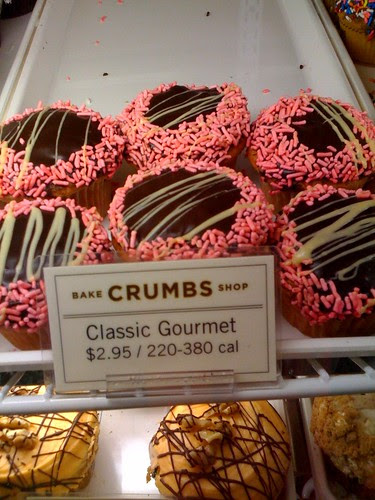 Speaking of Crumbs, they are expanding to Washington, DC, as announced in the press release below. The first one will open in March and the others will open in the months afterward.

NEW YORK, NY (November 16, 2009) – Due to a tremendous demand, CRUMBS Bake Shop, the first bake shop to introduce the gourmet cupcake, will debut their signature sized cupcakes and delectable sweet treats in the Washington, D.C. market in March 2010. The stores will be found in several neighborhoods including the downtown central business district, Georgetown, Cleveland Park, Foggy Bottom, Rockville (Maryland), Clarendon (Virginia) and Reston (Virginia), offering a variety of their delicious cupcakes, muffins, cookies, brownies, coffee and other baked goods.

“The D.C. market was the next logical choice for our expansion,” said Jason Bauer, CRUMBS CEO and co-founder. “The CRUMBS brand has strong name recognition in the market and we decided to listen to our fans who have been asking us for many months to come to D.C.”
calories Crumbs crumbs bakeshop cupcake bakeries New York new york city

Rebecca said…
Crumbs are my favorite cupcakes in the city. I've been to practically every cupcake shop, and nothing compares to their Grasshopper. Yeah the calories are scary, but who needs dinner when you can have a cupcake? PLUS, you can share them. I'm thrilled that they aren't $4.50 like they are online! *phew*
11/19/2009 2:40 PM

Miss Jen said…
I think putting calorie counts on cupcakes is a TERRIBLE idea!! We eat them because they bring a smile to our face. We know they are bad for us. That's why we (try not to) eat 3 or 4 of them in one sitting... Seeing the calorie count is a smack in the face and might make me turn around and not order one...(but I doubt it...)
11/20/2009 12:32 AM

Calorie facts are better than the dark, irrational fear lurking in the back of your mind that this cupcake has eleventy-million calories.

To be honest, the damage is less than I was expecting! Basically, one cupcake=two vending machine chocolate bars. No biggie. It's not like you're going to eat one every day.
11/20/2009 8:51 PM