The Cupcakery: My Vegas vacation 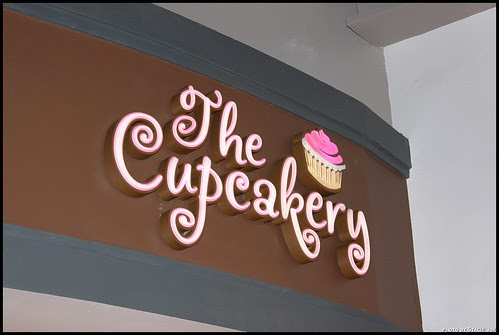 The Cupcakery has several locations in Nevada and Texas, but I visited only two in Vegas. One was the original site on S. Eastern Avenue and the other, a new site at the Monte Carlo.

I'll mostly concentrate on the Eastern Avenue location, because that's where everything is baked. I believe the baked cupcakes are then sent to the two possibly three outpost locations for assembly: frosting, findings, toppers, glitter.

First thing I'd want to say is that Pamela Jenkins, the Cupcakery's owner (and Cupcake Queen) is a kick-ass entrepreneur and cupcaker-maker. And, all kinds of awesome. I was super impressed with her whole operation. 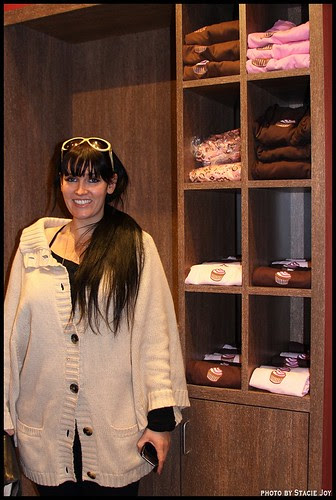 First, Pamela came and picked me up at my hotel and took me to her bakery. We were met there by The Cupcakery's PR agent (impressive, right?) Brandy Bell. And checked out the van. Love the license plate. 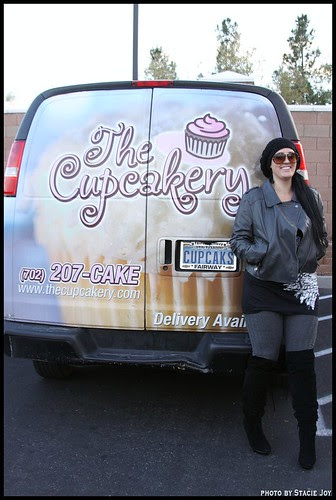 And then the store itself: 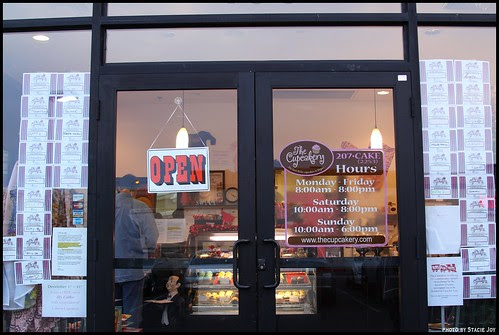 The scent of fresh-baked happiness hits you as you open the door. Everyone is smiling and happy, and there are super cute aprons to buy, along with the cupcakes, on display like jewels. (Except for the cream cheese-topped ones, which reside in a refrigerated case.) 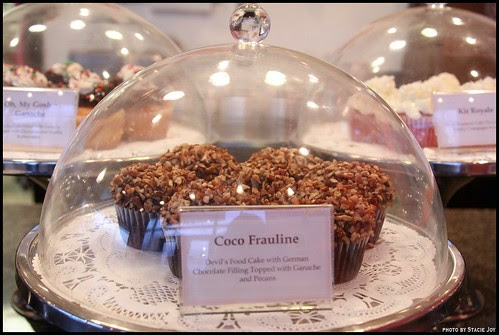 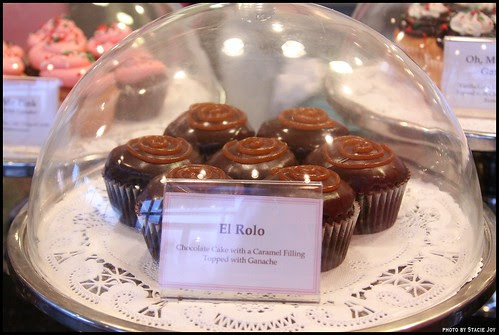 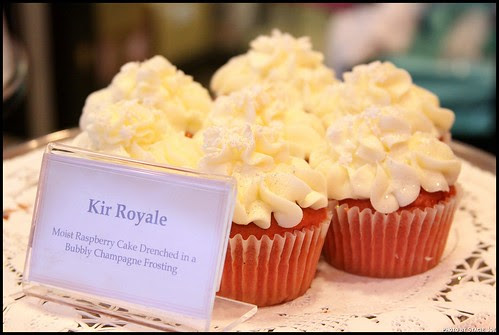 Right away, I knew I wanted to try the Boston Dream and the Coco Frauline. 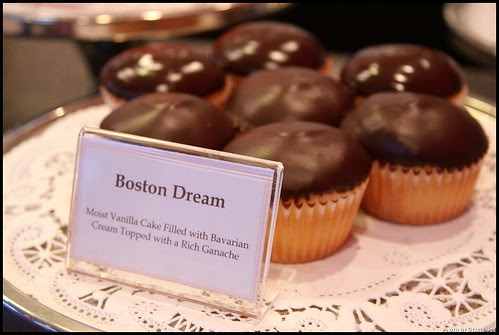 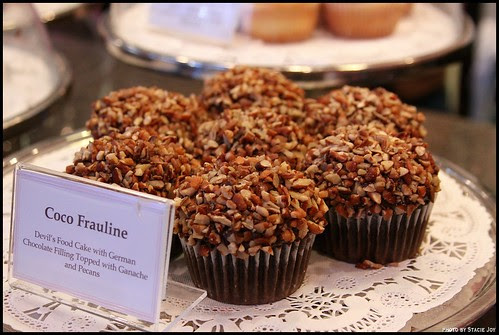 The Coco Frauline was amazing, especially for this devil's food cake-averse eater. It's a perfect companion for a cup of coffee, especially an iced version. The nuts were probably pretoasted, because they were more flavorful than I'd imagined. The Boston Dream was just that, a dream. I've tried and failed at making Boston cream cupcakes and I love them so. These tasted almost like donut, only lighter, airier. So good!


I was also excited to have the carrot cake (the Bugsy) and red velvet (both with excellent cream cheese frosting). I swear I could have eaten a bucket of just frosting. The carrot cake is exactly the way I like it. Perfect spice level, light, fresh, yummy. I wasn't a fan of the findings, but I tend not to like the harder sugared candies. They were cute and seasonal though. 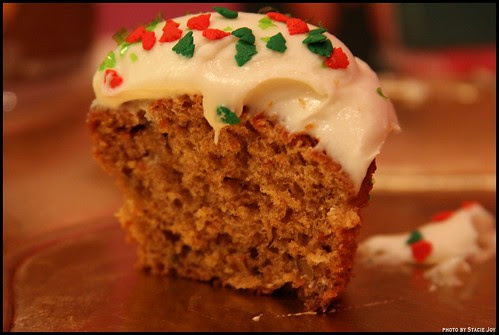 Pamela reports that the red velvet (called the Southern Belle) is a best seller, and I can totally believe that. Oddly, I can't seem to find a photo of it, but maybe I was so blown away I forgot to shoot it? Anything's possible. It's one of the best red velvet's I've had to date, and it's a true Southern version. I think it's made with buttermilk and vinegar, which is how I'd do it. It's moist and creamy and well, perfect. A must-buy.

The bakery is filled with happy folks frosting cupcakes, wrapping up deliveries, baking and listening to good music. And laughing. The whole place is filled with laughter, which is awesome for a bakery -- or any workplace. 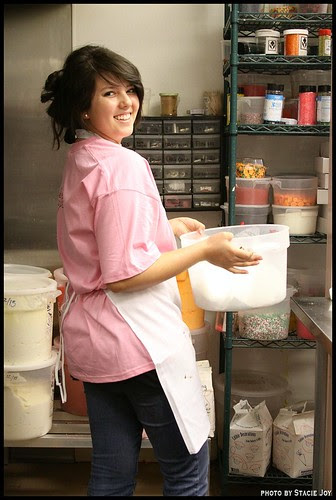 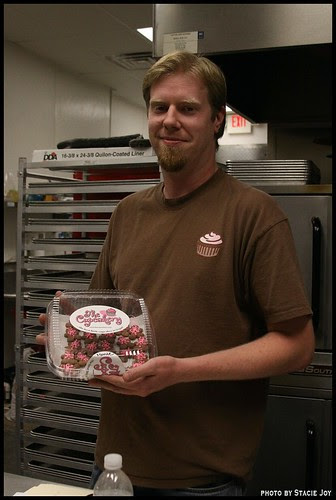 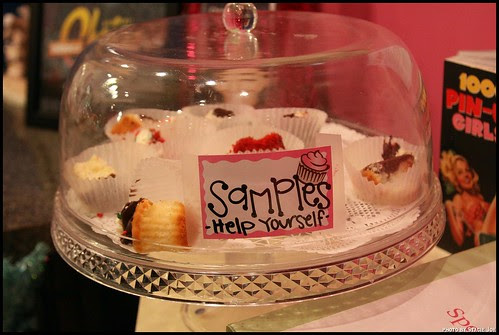 I desperately wanted one of these shirts but they only had an extrasmall left. Pamela -- if you get any larger sizes, I'm available to be your NYC walking advertisement... (*hint*) 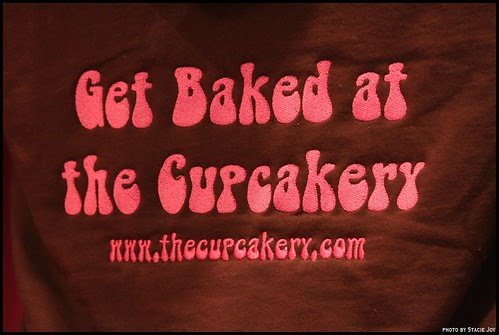 As soon as I saw these onesies I knew Rachel would love them. 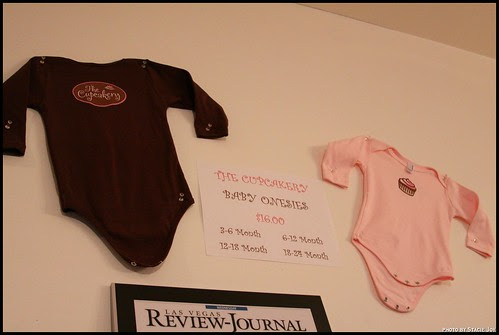 I'm not the only one blown away by Pamela and her operation. This is only one of the Cupcakery's many accolades. The Cupcakery is responsible for keeping rock stars sugared-up, casino events, celebrities' joneses and the good people of Vegas. 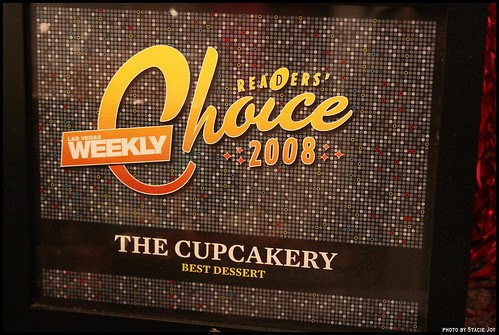 The only possible downside of all this excellence is the cost. I heard more than one person exclaim over the sticker-shock cost of the cupcakes. 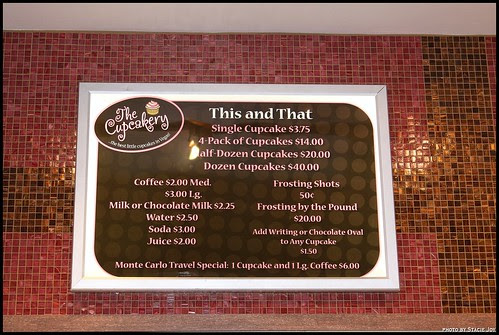 I can't lie, those are some high prices. But in my opinion, the cupcakes are worth the expense.

I would also say that the cupcakes were better at the Eastern Avenue location. Something was missing from the Monte Carlo, but the shop had only just opened days earlier, so things may be straightened out by the time you read this. Also, the Monte Carlo, like many casinos in Vegas, pump the air full of a scent. Something created to mask the incredibly high level of cigarette smoke, and to get you to shop more, buy more. It's not a pleasant scent, and I wonder if that affects the cupcakes. The Cupcakery-Monte Carlo smells like cupcakes though, not the odd perfumed air.

Unknown said…
I think it's cool that you got to talk to Pamela!
One thing I wanted to mention: the prices are different/higher in her strip location because it's in a hotel/casino, and pricing is based on her costs THERE. They are astronomically high (that's why when you get a starbucks at a casino it's usually DOUBLE than a normal location.)
Thanks for giving Vegas a visit!!!
2/01/2010 8:37 AM

Lindsay Rudolph said…
That place looks fabulous! I am so happy to find your blog. If I want to know anything about cupcakes, I know where to go!
2/01/2010 1:04 PM

Greta said…
Thanks for this post. I am going to Las Vegas in two weeks and I will definitely have to check out this bakery. I will probably go to the one at the Monte Carlo, simply because we are staying on the strip. I can't wait to try their cupcakes!
2/01/2010 3:24 PM

Em said…
Did you mean that the flavors ranged from "standard to obscure" instead of "obscene"?