CakeWalk: Is the bake sale really making us fat? 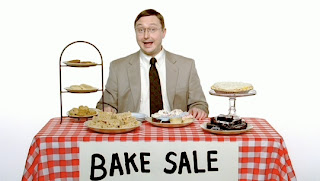 
A couple of weeks ago, the New York Times ran an article talking about the continuing theme of banning bake sales throughout schools in the United States. As an avid baker and someone who covers the topic not only here on Cupcakes Take the Cake but on other baking sites, I thought it was worth tackling the subject myself.

It seems somewhat timely – Jamie Oliver is challenging our nation’s schools to change their idea of what exactly constitutes a healthy school lunch. So, let me start by saying I support Chef Oliver’s goals and ambitions. I’m all for kids saying goodbye to over processed, cheap, disgusting food and embracing healthy lunches (and hopefully, their parents will get on board for breakfast and dinner). But, when did a cupcake or cookie every once in a while become our greatest enemy?

As a graduate of the Oklahoma City, Oklahoma, public school system, I was the participant of many school bake sales. Even though I went to a middle school that allowed Pizza Hut to come in and sell us greasy slices every day, I still understood that a homemade treat from one of my fellow classmates was a treat, something special that someone made in their home kitchen.

Aren’t bake sales all about community? And can’t one argue that it’s the lack of community that has allowed the big food companies to come in and decide what our kids eat? Why should Diet Coke and Doritos be sold in our schools when a homemade cupcake is considered contraband? When did these companies come in, ruin our food system, and in the end, left us with schools that are afraid to embrace chocolate chip cookies from a 2nd grader?

A cookie never made anyone fat. A cupcake never made someone go up a dress size. Lack of self control and a horrible overall diet did those things. Is our inability to exercise responsible eating habits going to ruin the idea of school bake sales? Well, I think that’s selfish.

As reported in the New York Times article, school and community bake sales are an important aspect of fundraising for students for activities such as band field trips and study abroad opportunities. And what about the community bake sales who send all the proceeds to pediatric cancer research?

Last winter, I was wrapping up my Christmas shopping when a young girl, probably 9 or 10 years old, stopped me outside the Chelsea Market and asked if I would buy some of her Christmas cookies. I asked her why she was selling them, whether or not she had made them herself. She shared that she was selling the cookies in order to raise money to buy her parents Christmas presents and that her entire family had helped her make the cookies the afternoon before. Of course I bought a cookie. In fact, I bought two. I, for one, will not recognize a work ethic that most young kids consider foreign.

And for those of you that think this girl was part of a scam planned by her parents, listen to the rest of the story. Later in the day, I was passing back by the Chelsea Market on my way to the subway when I watched the same girl sell her last cookie. The moment the customer walked away, I saw her bolt towards a woman standing nearby. Wrapping her arms around who turned out to be her mother, she exclaimed that she had raised enough to buy the family Christmas presents. Now THAT is how participating in bake sales, no matter how small, builds a community.


Mary Ann is the founder of the New York City chapter of CupcakeCamp NYC, an ad-hoc gathering born from the desire for people to share and eat cupcakes in an open environment. She is also the founder of Puff & Choux, a blog dedicated to the pastry and dessert arts. You can contact her at mary_ann_porch@hotmail.com with any questions, ideas or just to chit chat. You can also follow her on Twitter at @MaryAPorch.
bake sale CakeWalk community Mary Ann Porch

Rachel said…
Jamie Oliver tried to do exactly the same in the schools in the UK, and mostly failed. It's easy for people with shed loads of money to say we must all eat healthily, but food is extremely expensive here (especially fresh food) and lots of people have to feed their kids whatever is cheapest and will fill them up! People are sick to death of the government telling them what they should and shouldn't eat or what they can and can"t eat (anything super-sized has been banned here!) etc. How about a little personal responsibility for a change??!!
3/29/2010 2:48 PM

Unknown said…
I completely agree. Also, there is something very important that is lost when you ban bake sales. That is the homemade quality of any baked good that is made from scratch in the family kitchen. People who don't bake or didn't grow up in a family with homemade baked goods, have often no idea what a real made from scratch cake or cookie tastes like. If they grew up eating only store bought cookies, they develop a preference for the HFCS-enhanced, hi ratio shortening highly manufactured product.

Home baking is like story telling. It is an art that needs to be handed down, given with love to our children and our community.

Stacie Nevel said…
The only ones we have to blame is ourselves to be honest. I was researching the history of food and it seems America is the one nation that designed all its food around making the average housewife's day a bit easier. Fast and quick meals. It dates all the way back to the 1940's. We just kept it going, and modified it with cheaper fillers and preservatives so the manufacturers could save time and money themselves. It's a runaway train. The worst part is most of society doesn't want to take the effort to cook a full blown recipe. So Food Network tries to come out with all these ideas to draw American's in so they want to cook with whole ingredients. No, the cupcake isn't our enemy. I promote bake sales whole heartedly because its showing that households are making an effort to bake again. They should just put guidelines that the products have to be made from scratch. Plus if its for a good cause. Its better than raffle tickets.

I do agree with Jamie Oliver. However these cafeteria women don't do justice with food because its not the joy of cooking for them. It's just a job. What kid wants to eat mushy carrots or limp lettuce. Let him target the preschool's and daycares if anything. I have seen daycares throw a piece of processed cheese in a hamburger bun. Micrownave it, and call it a grilled cheese. That is just disgusting. Yet these parents are paying a fortune for childcare.

The french cook their pastries with the finest ingredients and especially use European butter which has a higher fat ratio than standard butter. However they eat things in moderation and they are a relatively thin country. Parents need to blame themselves for bringing those processed sweets into the house. Instead they blame everybody else for their childs obesity. Usually those Newspaper writers have a nearbye Starbucks on their desk keeping a processed muffin company, and for lunch a cornbeef sandwich at the corner deli. Cupcakes and all deserts are here to stay. Thanks to Food Network and TLC it will be here for a while.