Posted by Rachel on March 25, 2010
Good news for fans of fun (and sometimes wacky) cupcakes: The new cookbook What's New, Cupcake?: Ingeniously Simple Designs for Every Occasion by Karen Tack and Alan Richardson is now on sale! They're the duo behind New York Times bestseller Hello, Cupcake!, which has spawned calendars and plenty of people making their cupcake creations online.

What's New, Cupcake? includes even more outrageous cupcake creations, from a red lobster cupcake to a moose to rat cupcakes, a golf course, flamingos, karoke ice cream cupcakes (extra adorable points), sand castle cupcakes, flowers galore, graduation cupcakes made with Froot Loops and perhaps the pièce de résistance, Chinese food cupcakes (yes, with broccoli and lo mein and fried rice!). And no, I don't mean real Chinese food, but using candy to recreate it; you'll have to check out the book for that one. The best part is that it's all edible.

We will have much more on Karen and Alan, What's New, Cupcake? and their upcoming events. (Note: We received free review copies of What's New, Cupcake? from the publisher.) And see www.hellocupcakebook.com for their blog and the latest news, recipes, cupcake games and tidbits and more. 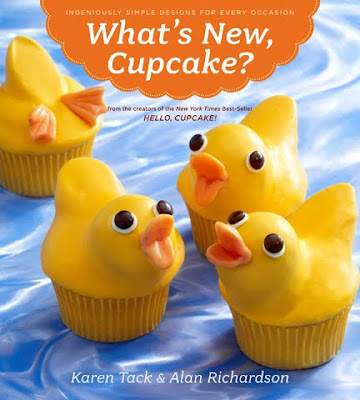 Over at Amazon, there are a bunch of videos featuring the authors showing off tricks and tips from the book, and two recipes (one of which includes donuts!), which we're reprinting below.

An Apple for the Teacher cupcakes

Whether you want to butter up your teacher, keep the doctor away, or tempt Adam, our apples do the trick. The cupcakes are topped with doughnuts coated in red frosting, rolled in red sugar, and adorned with Tootsie Roll stems and fruit-chew leaves. The tines of a fork make the impression of a bite, which is then coated in white frosting. The seeds are candy-coated sunflower seeds.

Instructions:
1. Cut 1/2 inch from the bottom of each mini doughnut with a serrated knife and discard bottom piece.

2. Spread some vanilla frosting on the cupcakes and place a mini doughnut piece, cut side down, on top of each. Place the cupcakes in the freezer for 10 minutes, until slightly frozen.

3. For the stems, cut the unwrapped chocolate chews in half lengthwise on the diagonal and shape into stems. For the leaves, roll out the green fruit chews 1/8 inch thick, then cut into ten 1 1/2-by-3/4-inch leaf shapes. Make a crease down the center of each leaf with the back of a paring knife and pinch one end of each leaf.

5. Working on 1 cupcake at a time, spread some of the red frosting on the top and sides of the doughnut and cupcake to fill in the gaps and lightly coat, making the doughnut look like the top of an apple.

6. Roll the frosted cupcake in the red sugar to coat. Repeat with the remaining cupcakes.

7. To create a bite from the apple, carefully remove a 1 1/2-inch-diameter divot from the top of 1 of the sugar-coated doughnuts, using fork tines or a paring knife. Snip a small (1/8-inch) corner from the bag with the vanilla frosting and pipe a thin layer of frosting to cover the exposed area inside the divot. Spread lightly with the back of a small spoon to smooth. For the apple seeds, arrange the sunflower seeds, pointed ends toward the center.

8. Insert the chocolate-chew stems with the green fruit-chew leaves at the top of the apple cupcakes. Arrange the cupcakes in a basket.

Koi made from circus peanuts transform a simple platter of cupcakes into a golden pond. You'll be amazed at how easy it is to make the bodies and fins. The fish float on overlapping blue and white paper bubbles.

Instructions:
1. Spoon 1/2 cup of the vanilla frosting into a small ziplock bag, press out the air, seal, and set aside.

2. Tint the remaining can of vanilla frosting pale blue with a few drops of the blue food coloring. Cover and set aside.

3. Place 24 of the circus peanuts on their sides and cut lengthwise into 2 slices, to make 48 slices for the fins. Lay each slice flat and cut each in half on the diagonal to make 96 pieces.

4. For the bodies, place the remaining 24 circus peanuts flat side down and make a diagonal cut from one short end, removing no more than 1/4 inch.

7. If you like, arrange the cupcakes on a surface with circles cut from white and blue paper and sprinkle the platter with white and light blue candies.

In the video below, Karen Tack shows you how to use Jelly Belly jelly beans to make fun spring cupcakes:

Kim @ http://frostmeblog.blogspot.com said…
Thanks for the preview! I can't wait to get my copy! I so love the Hello Cupcake and this one looks like it isn't disappointing!