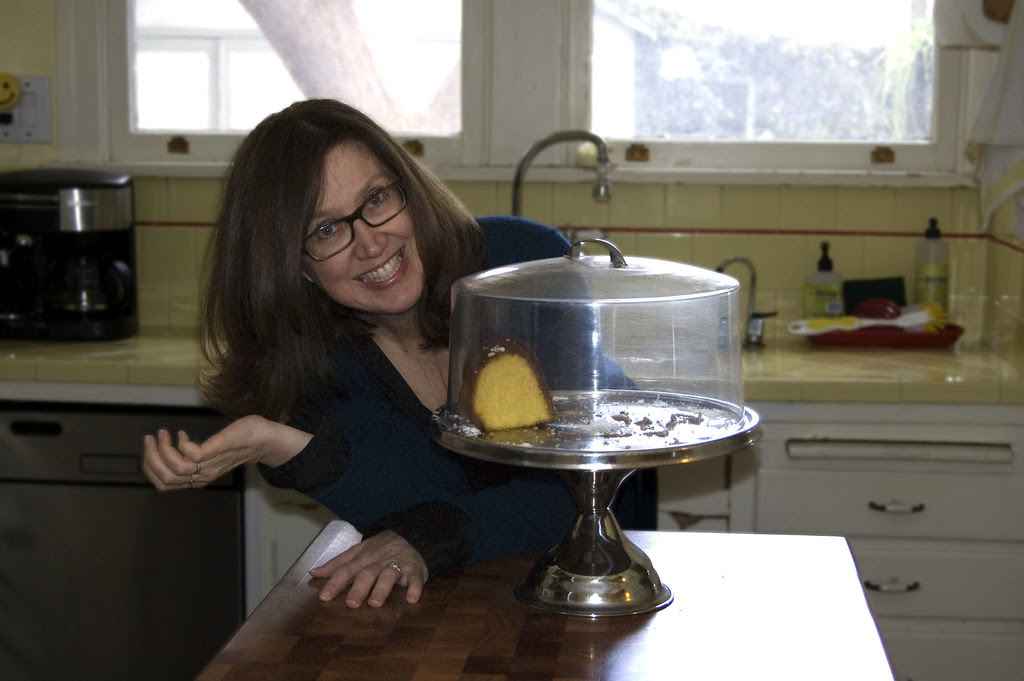 How did you and co-author Krystina Castella get the idea for Booze Cakes?

The original germ of the idea was mine, but Booze Cakes was a very collaborative effort. Krystina Castella, who is also a product designer, and I both were both teaching at Art Center College of Design in Pasadena CA, and she was a consistent guest lecturer in my class. After several terms of hearing her talk about her cool cookbook projects, including her great Crazy About Cupcakes (Sterling Publishing), I knew I wanted to work with her. So while making my mom’s 1970s-era Harvey Wallbanger Cake one night, it hit me that what the world really needed was a Renaissance in boozy baking. And I knew Krystina and I were just the people to kick it off with a book and she agreed. Actually, I knew it was a “go” when she broke out laughing at the title!

What was the most challenging part of creating the recipes? How did you go about taking, say, a drink like the Fuzzy Navel or the Screwdriver, and turning them into cupcake form?

One of the interesting things about our development process was that we linked up new combinations of alcohol type + baking style + physical structure of the cakes. Being designers, we’re both very visual people and we sort of instinctively combined tastes and shapes first.

We created an outline for the book including the chapter topics and then had frequent meetings to brainstorm recipe ideas. Breaking the book down into chapters, we decided that one of them should be Cocktail Cakes. These cupcakes come from the idea of turning your favorite cocktail into a cake. Krystina and I thought about a range of flavor combos and drew up a list of cakes based on popular drinks that we enjoy. From there we each chose recipes to test and expand on and reported back to each other with the results. Our favorites were chosen for the book.

The cocktail cakes are really fun to make, because essentially you are mixing multiple ingredients into the batter in a similar way to mixing a cocktail. Plus garnishing cakes is just as fun as garnishing drinks!

Screwdrivers are a casual drink- and one of the most popular introductory cocktails for the novice drinker. Our cupcakes with orange zest, coconut, and sweet vodka buttercream frosting are tasty casual cupcakes and are easy to make. The Fuzzy Navel is a total 80’s cocktail. Krystina always loved the term “peachy keen,” and it fit so well with fuzzy navel, that we named the cupcakes after that. I love the variation on that cupcake— I mean, who doesn’t want Sex-On-The-Beach? You’re definitely going to make people happy by just telling them the names of some of our cakes.

You write that during Prohibition and the 1970’s, booze cakes had a revival. What about now? Are they gaining popularity again?

What’s your favorite of the recipes that appear in the book and why?

Okay, that’s kind of like choosing your favorite child. If I must though, I’ll admit to having a sweet spot for that Harvey Wallbanger Cake because it is one drunk Bundt cake, and because it was so inspirational in terms of the book’s initial kick-off. This summer though, the Tres Leches Cake is a favorite. That cake is making my friends very very happy at birthday parties and BBQs because it is so light. This recipe is inspired by having lived in Miami for a long time and enjoying it often in restaurants there. The addition of Cachaça (Portuguese pronunciation: [ka__as_], a Brazilian sugar cane vodka-like liquor) makes the cake even more delicious.

How much booze do you wind up tasting in most of these recipes? Can you get drunk or buzzed from eating these cakes and cupcake?

In creating this book, we challenged ourselves to use a wide variety of booze, and explore the possibilities of alcohol as a flavoring. Personally, I ended up really loving to bake with Drambuie (a scotch liqueur), Jägermeister (a 70-proof German digestif) and tequila! All of which taste amazing with chocolate. Plus I experimented a lot with the range of flavored vodkas. In fact, I’ve got some Absolut Mandarin sitting in the freezer right now because I made Screwdriver Cupcakes (but with Dark Chocolate Frosting) last night. Flavored vodka… now, really, isn’t that a great idea?

Can you get buzzed? Sure. There is alcohol retained in these cakes. It all depends on when it is added and how long the baking time. For example, when booze is mixed into the batter and baked 40 % is retained for cupcakes baked for 15 minutes and 25% for a cake baked an hour. But when soaked into the cake after baking 70% of the alcohol is retained. Heat and exposure to air is what makes alcohol dissipate a little. Most of our frostings and creams are not heated, so 100% is retained. When making a boiled icing or cream we remove the mixture from the heat and let cool a bit to retain the alcohol. Bottom line: If you want your cakes boozy: soak them. Give them a “booze bath” by putting some alcohol in a shallow pan and setting the cupcakes in it. Or, you can drizzle more booze on top before frosting. Either way, the cake will absorb the hootch.

For the cupcakes, is there anything people baking them should know before they proceed?

Have fun! Baking is fun. Drinking is fun. Combining the two is even better. I’m not the kind of baker who will spend hours and hours on frosting and decoration, I want cakes that are simple to make, and taste amazing. Adding booze makes cupcakes taste amazing. We hope that people agree and enjoy making our recipes!

I love that they are individual cakes— pretty much the perfect ratio of cake to frosting served up in a pretty paper wrapper. They are sinful and decadent and personal. You don’t have to share your cupcake with anyone!

I do have a weakness for Mint Julep Cupcakes, and the ridiculously cute Blue Hawaii Pineapple Upside-Down Cupcakes that we have in Booze Cakes. Also Red Velvet Cupcakes with Cream Cheese Frosting, which we didn’t include in our book.

For the most part, they are easier to make and often easier to serve. Sometimes I really screw up my layer cakes, structurally. Cupcakes are more of a sure bet.

In Booze Cakes, we’ve taken the idea of small cake bites that is such a great thing about cupcakes and developed a whole series of recipes that we call “Cake Shots.” I hope everyone tries our little Wine Tasting Cakes, Long Island Iced Tea Cakes and of course, Jelly Shot Cakes (based on that Frat Boy favorite, Jello Shots). Super fun.

Yes, I baked some Screwdriver Cupcakes last night! Los Angeles does have a number of very good cupcake bakeries— but I try to keep my patronage down to a dull roar. I do wish I could teach our pugs to bake. That would be hysterical.

My Mom made them for my kindergarten class and brought them to school for my birthday. They were a huge hit. The kids just loved my Mom for bringing them. I immediately made note of it: Cupcakes will make you popular.

That just sounds so naughty!

Have a good time playing in your kitchen. My philosophy is basically: “Have fun, it's just cake.” What’s the worst that can happen? Even cake wrecks are pretty yummy, especially when they have booze in them. Oh, and, Please Bake Responsibly. Thank you!

Unknown said…
Hi, you make mind blowing ideas about regarding online cake delivery in Hyderabad and a spectacular article here.
8/23/2013 3:19 AM

Anonymous said…
Keep your loved ones happy by delivering this delicious Cake with the classic arrangement of flowers that will sure be loved and admired by your friends. Our online site online cake delivery in Hyderabad
9/04/2013 3:08 AM