Posted by Rachel on March 10, 2011
Blogger Amelia's House, who's also UK (Berkhamsted Hertfordshire) custom bakery Nevie-Pie Cakes (and has a great Flickr acount), made these cupcakes for her book club, celebrating A Prayer for Owen Meany by John Irving. Via Flickr: "The quote is one I used all the time on my designs when I was a college, I can't remember where it came from."

As for cakes...well, there is a lot of symbolism about armlessness in the book, so I did toy with the idea of making gingerbread men without arms, but Mr LD thought that was pretty crass...and if even he thinks that, then it really must be! There is only one mention of cake in the book: when the narrator's mother marries they have cupcakes. So I decided to make wedding cupcakes. After I had made them Mr LD asked if the angel wings were to symbolise the 'prayer' in the title. I said yes, but really hadn't thought that hard about it. However, with further thought I realised how appropriate they are because I wasn't sure if Owen really was an angel! 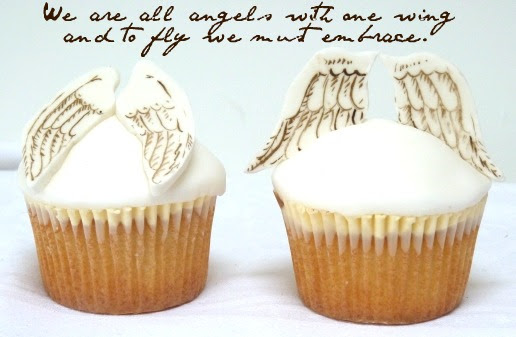 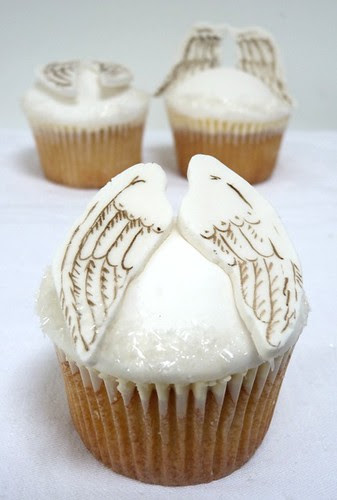 And this one has nothing to do with books and everything to do with being beautiful. They're chocolate mud cupcakes with ganache topping and fondant rose, also by Nevie-Pie Cakes via Flickr. 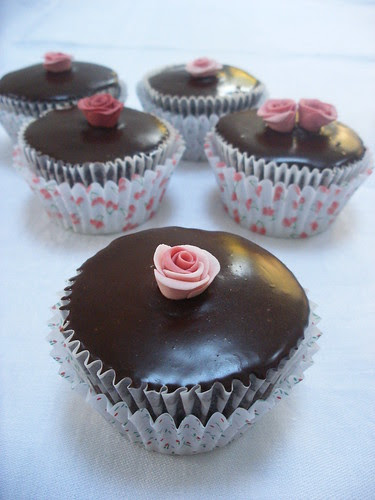