Posted by Unknown on April 06, 2011
Hello from London! I'm Kelly. I'm originally from America, but I've lived in London for the last eight years. I started my blog American Cupcake in London a year ago and I am constantly on the lookout for new cupcake and cake centric bakeries to check out as they become more and more popular in London.

London is a fabulous place. I hope my list of the best cupcakeries will entice you to visit, whether you're travelling from far away or within the UK. I've tasted the amazing, the intriguing, and the bad (so you don't have to!), and have made a list of the best cupcake sellers in London. Time Out recently issued their top picks and I couldn't disagree with them more! Here are my picks listed in no particular order. 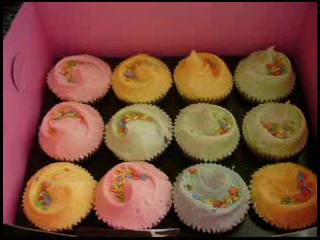 Vanilla box from Hummingbird
The Hummingbird Bakery is London's first cupcake bakery and arguably the most popular. Their basic vanilla and chocolate cakes taste delicious and are sold at a reasonable price of £1.75 each. They've just published their second book of recipes, Hummingbird Bakery Cake Days

. Their specials (£2.50) are some of the best in London with more creative flavors on offer than some of the other bakeries. The Tiramisu I had last week was soft, moist and flavorful. With 3 locations (and a 4th on the way) you can't miss them! 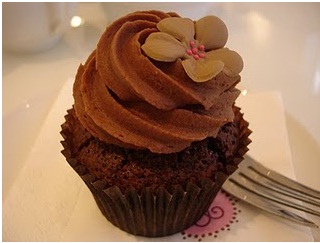 Chocolate Cupcake from Peggy's
The Peggy Porschen Parlour is undeniably the cutest in London. Peggy is originally from Germany and is famous for making celebrity cakes. Situated in posh Belgravia, the newly opened parlour offers a selection of cupcakes (£3.50) such as black forest, lemon and chocolate. Peggy's offers a variety of handpicked tea blends to go with your cupcakes. Be warned the shop is filled with gorgeous cupcake stands and books to purchase! 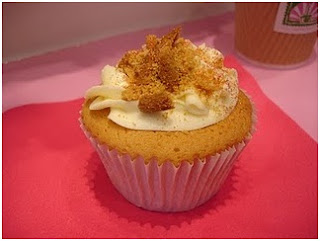 
The Love Bakery is situated in Chelsea and opened in 2009. The Love Bakery in my opinion has the best tasting cakes. Earl Gray and Rhubarb & Custard are two of the more intriguing flavors on offer and are reasonably priced starting at £1.65 each. Can't make it to London? The Love Bakery also has a recipe book (Love Bakery

), and I use it all the time. The recipes are the real deal from the bakery. 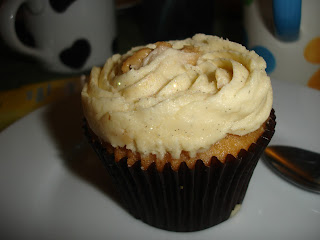 Peanut Butter Cupcake from Ella's
Ella's Bakehouse is operated and owned by former supermodel Lorraine Pascale. Lorraine is not only beautiful, she's recently starred in her own program on the BBC, "Baking Made Easy" with accompanying recipe book (Lorraine Bakes. Lorraine Pascale

). The shop is only the size of a shoebox but is in the fabulous area of Covent Garden so get your cupcake to go! I recommend the peanut butter cupcake! 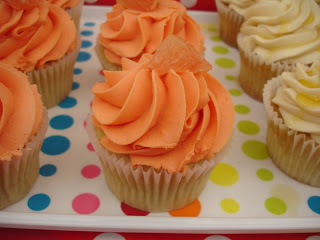 
Ms. Cupcake is London's first Vegan Bakery. She has just opened the doors of her shop in Brixton on April 1st. Ms. Cupcake set up her business about one year ago selling in some of London's best food markets and not without some controversy! In addition to the shop she still trades at the markets on select days. She makes wonderful and intriguing flavors such as Bounty, Grapefruit and Cherry Bakewell (£2.00). Tasting these you would not believe that they're vegan. It's also worth a visit to see what cupcake hat she's wearing! 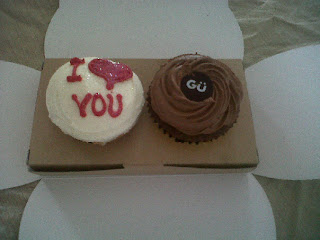 GU Cupcake from Lola's
Lola's Cupcakes started selling cupcakes at the food hall in the famous London department store Selfridges. They have now expanded and have their own dedicated counter in the food hall and a small shop in Mayfair. I'm a sucker for their Vanilla & Milk Chocolate cupcakes. Their specials of the month are sometimes hit and miss, but specials in the past that have hit the mark are Pimm's and GU Chocolate (a popular chocolate dessert brand in the UK). They also sell cute sprinkles for reasonable prices.
As a side note, Selfridges food hall is also home to the unique. This past month saw the launch of a "healthy" cupcake made with vegetables. I have yet to try these, so taste at your own risk! 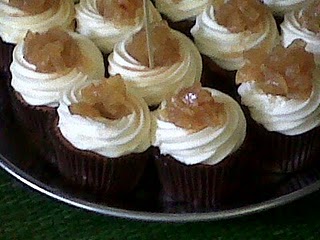 Apple Tarte Tatin Cupcake from Kooky Bakes
Kooky Bakes are one of the newest sellers out there. At the moment you can only buy their cupcakes (£2.00) at Brick Lane from the trendy Sunday UpMarket. If you've been good all week treat yourself on Sunday to one of their Apple Tarte Tatin cupcakes (flavors change with the season). I have spent an embarrassing amount of time in my kitchen trying to frost my cupcakes like they do! 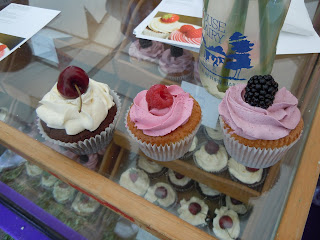 Sunmmer Selection from Bea's
This is for all you Royal Wedding fanatics! Bea of Bea's of Bloomsbury will be hosting a Royal Wedding Afternoon Tea on April 29th at her Theobald's Road location. Her new location at One New Change is just a stone's throw away from St. Paul's cathedral where Prince Charles and Diana married. The tea will feature "Kiss me Kate" cupcakes along with other non-cupcake treats such as "Wills and Kate Macarons". There will be a champagne toast and a bag of wedding favors to take home. Also, the week leading up to the royal wedding, cupcakes featuring past royal weddings will be on offer. Royal cupcakes will be £2.50 each. Bea is also hard at work penning her first cookbook which is due out in the autumn. 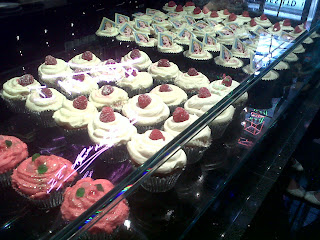 Selection at Cox
Eric Lanlard is a hugely successful Patissier in London (with several books to his name). He however misses the mark with his Soho cupcake outlet Cox, Cookies & Cake. The shop has the character that many in London are lacking (styled to match the "adult" surroundings of the area). Unfortunately, it is all pizazz and no substance. "Premium" Cupcakes are priced at a staggering £4.00 ($6.80) each plus 25p for a takeaway box. The Red Skull Cupcake is supposed to feature a "sensuous raspberry compote center" which tastes of nothing more than jarred jam and the Skulls are made of less than premium dark chocolate. Tourists beware! The shop window is worth a walk by, but keep walking and head down the road to one of the many other bakeries in Soho.

I set up a "London Cupcake Tourist Map" when I started my blog so I could keep track of where I've been and list all of the addresses if you're feeling adventurous.
london

Chickago Bear said…
You should also try some of the online bakeries in London too, there are some amazing ones and the cupcakes are out of this world! My favourite is probably Wraggamuffins because the cupcakes are filled, plus they also sell these huge muffins which are soooo good. Lots of people rave about them, I don't know why they don't open a shop!
11/09/2012 5:19 AM