Cupcake blog dedication: I ate a real grasshopper on and inside a cupcake!

Posted by Rachel on October 30, 2011
Barb's Bakery of Phoenix, Arizona, was not to be outdone in the "I can't believe I'm eating this" unofficial cupcake category today at Scottsdale, Arizona's Cupcake Love-In, serving up a chipotle grasshopper cupcake. Not "grasshopper," like the chocolate mint flavor, but grasshopper, like the bug. I was challenged as a judge to eat it, along with the four other judges, and we all did so at the same time. I closed my eyes, expecting it to be crunchy and chocolatey. It was indeed crunchy, but salty, and didn't all go down in one bite. I didn't know what flavor cupcake I was eating, so I took a fingerful of frosting, and it turned out to be spicy, so I bit into the cupcake, and it was crunchy! More grasshopper! It was intense. I heard their other cupcakes were alcohol-inspired, including cosmo, but I didn't get a chance to try those. Kudos to Barb's Bakery for going there and forcing us to try something new. I don't think I'd eat grasshopper again, but I'm glad I tried it, and the chipotle had an unexpected kick to it. 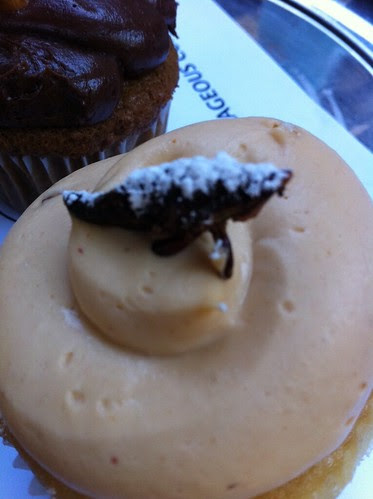 that's a grasshopper on top! 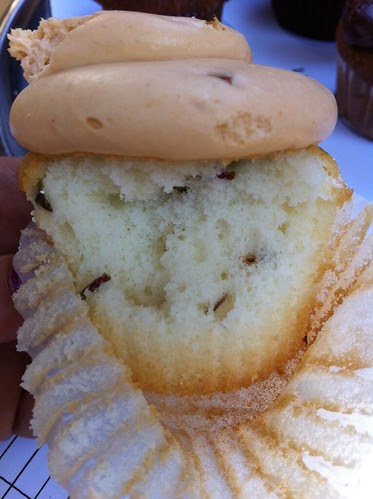