Dear Globe and Mail: Will cupcake haters ever go away?

Posted by Rachel on October 29, 2011
As if we needed another "cupcakes are over" story, here comes The Globe and Mail to the rescue with a tired, dumb article, "The cupcake: will it ever go away," along with, wait for it...three cupcake videos! Because cupcakes are over, let's add video. I get sick of media telling us what we should or shouldn't be eating, so just to be clear: I don't care if you don't eat or like cupcakes. We are not trying to foist cupcakes on anyone, but I think you'd have to be deliberately not looking right in front of your face to see that cupcakes are increasingly popular. From the article:

Some psychologists maintain that comfort foods like cupcakes serve as “social surrogates,” an object that becomes a stand-in for those who are absent, mimicking intimacy. A University of Buffalo study found that eating chicken soup – for subjects who identified chicken soup as a comfort food – immediately triggered memories of relationships. Certain foods may actually make us feel less lonely.

Perhaps cupcakes are winning because they serve a dual function: They conjure warm past associations, but are also the ultimate solo indulgence – single-sized and not for sharing.

I also like how this article manages to mention cupcakes appearing in the film Bridesmaids and 2 Broke Girls and talk about the cupcake/economy connection and call cupcakes "feminine" without mentioning, say, Butch Bakery, which also has a cookbook out, or any of the leading male cupcake chefs, or any of the innovations that have been going on with cupcakes.

People ask us all the time why cupcakes are popular, and I'm sure every reader and cupcake eater and baker has their own opinion. Some just love the taste, some like the design and artistic aspect, some like the fact that cupcakes are malleable and can be used to celebrate everything from Twilight to Halloween to a graduation to Princess Eugenie's hat. They aren't in competition with brownies or cookies or pie or anything else. It's also probably the least original angle you could come up with to say "I'm so over cupcakes, someone rescue me from their omnipresence." We get it. There is no right or wrong, it's a matter of taste buds. Can we not agree to disagree and not disparage other people's interest in a given dessert (or anything else for that matter)?

I'm not saying cupcakes are better than any other dessert, but they're not worse, and articles like this, in my opinion, are just using cupcakes as a way to whine about not liking something that is clearly popular. So, moving on to real cupcakes news, as I type this from Scottsdale, Arizona, where tomorrow I'm a judge at the 750-attendee Cupcake Love-In. 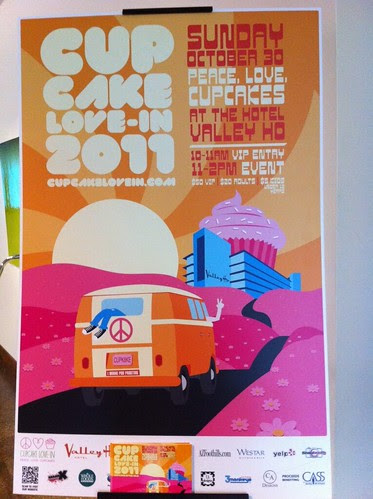 Joyfull4444 said…
Ah, no worries. The article is from the globe and mail, the most boring & out of touch news in print & online. Since the average reader age of the G&M is 90 & up, I'd take what their columnists have to say with a grain of salt.