Posted by Rachel on January 14, 2012
Talk about team spirit! Not only do these New England Patriots cupcakes spell out who they're rooting for in white chocolate which, along with the red velvet cake and blue frosting form red, white and blue, they're made by W Desserts, based in Stoughton, Massachusetts, and run by Maura Wilson, who works as a graphic designer for the Patriots and makes cupcakes in her spare time! Isn't that awesomely full circle? Via @WDesserts on Twitter - if it weren't for these cupcakes, I wouldn't even know the playoffs were happening this weekend! 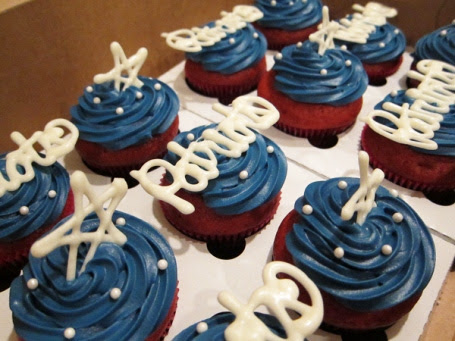 The team is playing it’s first playoff game of the season on Saturday. Everyone has been working hard and putting in the extra hours to make sure things look great and will provide our fans with the ultimate playoff experience. What better way to keep the energy flowing and spirits high than a fun cupcake packed with a quick sugar rush? I whipped up some red velvet cupcakes with cream cheese frosting. Although I was a little leary at first at the thought of blue cream cheese frosting, I couldn’t be a designer for the team and not use the team colors, right? So I added in some blue and hoped for the best. Then I added some white chocolate “Patriots” and stars and a few white pearls. Hopefully these put a smile on my co-workers’ faces and keep everyone cranking out the work so we can get out of there at a reasonable hour.

Want to order your own? Email wdesserts at gmail.com and you can also find them on Facebook. 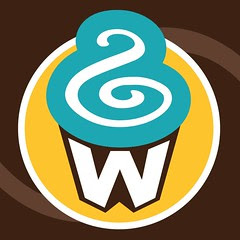