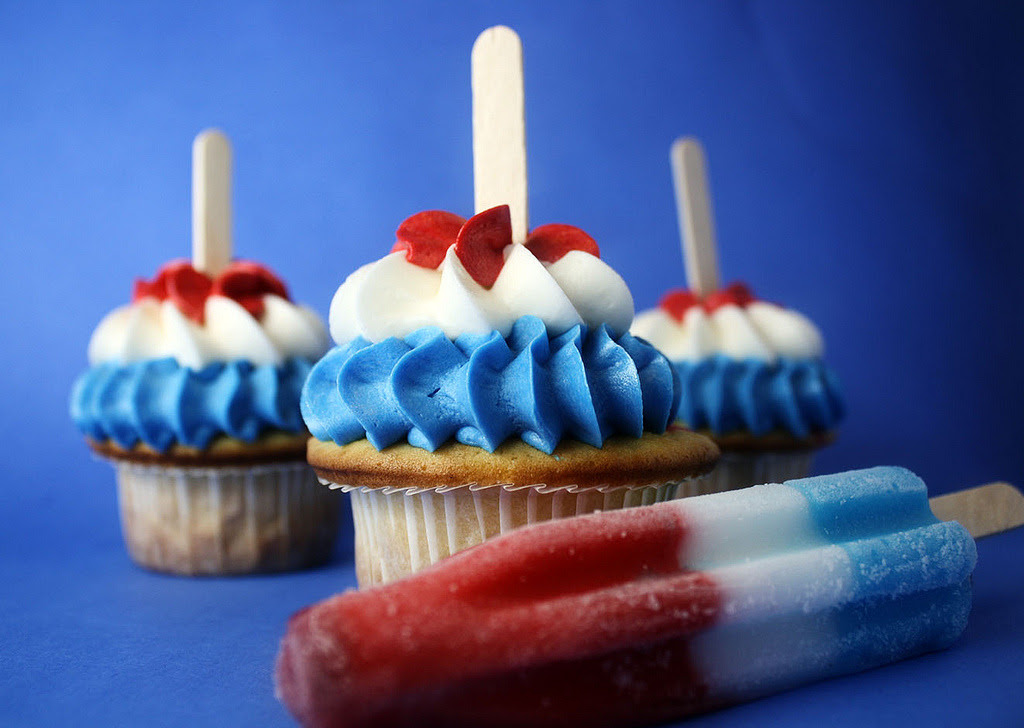 June is almost gone and July is nearly here! With Independence Day on it's way I thought these Bomb Pop Cupcakes might be perfect for your next barbecue or family party! Created by Oh-Lolaaa via Tumblr, this recipe is easy to follow and looks amazing!


Preheat oven to 350. Line 24 muffin cups with paper liners and set aside.
In a large mixing bowl, combine cake mix, eggs, buttermilk, oil, and lime juice. Mix on low speed with an electric mixer for about 30 seconds or until well combined.
Scrape down the sides of the bowl and increase mixer speed to medium. Beat for 2 minutes.
Fill muffin cups 2/3 full with batter and bake for about 15 minutes or until tops spring back when lightly touched.
Remove from oven and let pans cool on wire racks.
Once cupcakes have cooled, remove from pans and poke holes in the tops with a wooden skewer.
In a medium bowl, stir together:
1 cup boiling water
Carefully spoon Jell-O mixture over cupcakes, allowing it to soak into the holes.

Frosting
3 sticks butter, softened to room temperature
wooden popsicle sticks for garnish
In the bowl of a stand mixer, beat the butter and milk on low speed until barely combined. Increase to medium speed and mix until well blended.
Add powdered sugar and beat on low speed until combined. Increase speed to medium and beat for about 2 minutes, until light and fluffy.
Measure one cup of frosting into a bowl. Split the remaining frosting evenly into two other bowls.
Add the cherry extract and desired amount of red color to the bowl with only one cup of frosting. In another bowl, stir the lime juice into the frosting. In the other, add the raspberry extract and desired amount of blue color.
Pipe the blue raspberry frosting on the cupcakes, followed by the lime and cherry frosting.  Insert a popsicle stick in the middle of the cupcakes.
**Depending on how high you want to pipe the frosting on your cupcakes, you may want to double the frosting recipe.
bomb pops cupcake recipe cupcake recipes Fourth of July How to Independence Day July 4th June kids popsicle recipe summer Tumblr