Inside the Mind of a Cupcake Champion: Anthony Valerio, Wonderland Custom Cakes


First off, congratulations on your second win! I know you can’t advertise your victory until after the episode airs, I can’t imagine how difficult that is! Wonderland Custom Cakes has competed on Cupcake Wars before, being crowned champions of the Comic-Con themed episode. What made you decide to compete in such a high stress competition for a second time, especially against other Cupcake Wars champions?
I guess I’m crazy! Actually, I was more strategic this time around. The first show really put Wonderland on the map but at the time we were asked back to do the second show, we were looking for a storefront and I thought the publicity would really help with the opening. It’s definitely “high-stress” but at the end of the day, I am confident in my abilities—even against past winners.

How was your overall experience this time around versus your first time on the show?
This time around was just as intense, probably more so, but at the same time, the television/camera aspect wasn’t as intimidating. You kind of know what you’re getting yourself into the second time around. I was also really excited to show my stuff for the USO Gala. I think it’s a spectacular organization and such a grand event! 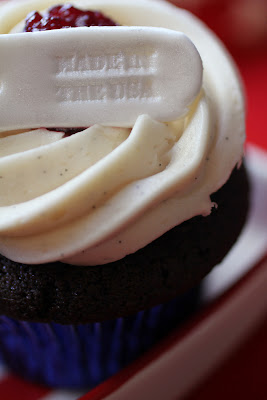 Let’s talk about the first round. You were required to incorporate two ingredients into your first cupcake. The choices on the table included tomatoes, corn, onions, and even crab! What was going through your mind as you picked your ingredients?
“What can I pick that no one else will pick.”

Your first cupcake, a sugar beet syrup cake with fresh ginger filled with a tart cranberry compote, was met with rave reviews! Florian is usually the hardest judge to impress, how terrifying is it during the judging?
It’s very terrifying. A little awkward, even, at first. The round moves so fast and I’m trying to combine all these flavors quickly and also proportionately to make sure that the judges taste my vision. So, when you’re standing there watching them eat your cupcake emotionless, it’s a really nerve-wracking feeling! But after the judges call your cupcakes “a perfect plate” and basically tell you that your cupcakes are the best they’ve had, it’s an incredible feeling (and a big relief!).

As a lover of your cupcakes I know your creations are always delicious and beautiful. What inspired your “Heart”, “Hope”, and “Honor” flavors and decorations?
The flavors were all inspired by American classics – classic American flavors…peanut butter, whiskey (bourbon), coconut crème pies. Elevated into something more sophisticated, of course. But each of the cupcakes had their own theme and it was derived from my knowledge of the USO. For example, “Heart” was a symbol of America’s favorite past time (baseball) and it represented the recreational events that the USO often organizes to lift the spirits of the troops. “Hope” was a tribute to the USO’s biggest celebrity supporter, Mr. Bob Hope, who is synonymously associated with the organization for his live shows. That was the cupcake that had the word “hope” imprinted into a red start and a replica old-fashioned microphone stemming from the “O”. Lastly, the “Honor” decoration was inspired by the impressive timeline of the USO in the last 70 years. It also served as the Gala’s iconic cupcake for the night!

The third round always looks like the most stressful part of the competition. You have to get 1000 cupcakes made, decorated and placed on a display you design. I’ve always wondered how hard it is working with the show’s baking assistants?
The baking assistants are extremely easy to work with, actually! At first, it’s a little overwhelming because you have to bring them up to speed with everything going on – your cupcakes, decorations, themes, display ideas, etc. But once the work is clearly delegated, the really are able to work with you independently to achieve what you need! They are stellar! 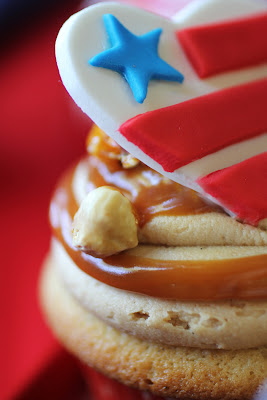 You were freaking out trying to get all the fondant toppers done, what was going through your head at that point of the competition?
It was a lot of fondant and I knew that. I just didn’t want to slow down. 1700 individual pieces (might have actually been a little more if you’re counting stripes, etc) are nearly impossible unless the pace is maintained! And it was very important for these cupcakes to look spectacular. Luckily, Vandy and her baking assistants were able to keep moving through batters and fillings pretty quickly.

Is there anything else that goes through the mind of a Cupcake Wars competitor that you’d like everyone to know about?
I don’t know about the other competitors, but when I’m competing, my mind is constantly racing trying to make choices that are going to separate me from the rest. I like to do things different, especially flavors and decoration. It’s all about separating yourself from the rest to prove that you are the best. 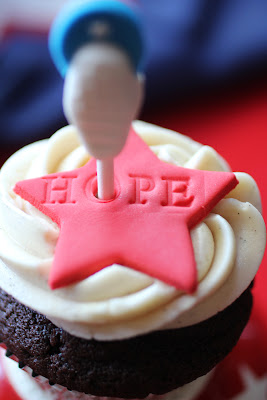 Again, huge congratulations on your second win! Will we be able to enjoy your competition cupcakes any time in the near future?
Of course! We have them available in the bakery on a rotating schedule, along with all of our flavors. We even still rotate our winning Comic-con cupcakes too. Check out this month’s menu: http://www.wonderlandcustomcakes.com/cupcakes/

**FYI: Our Championship episode “Saluting the USO” is re-airing this Saturday at 1pm on Food Network