Posted by Rachel on July 04, 2012
Yesterday, I visited the Georgetown Cupcake in SoHo (I also went there on Monday, but will tell you about those cupcakes separately). I like to stop by if I'm in the neighborhood because they have so many flavors, I get to continue my quest to try them all. Yesterday, I bought a marble fudge brownie cupcake (they're $2.75 each). It sounded good. 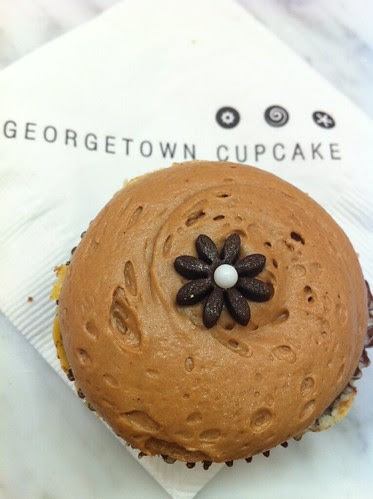 Then I picked it up to take a photo and it started to separate: 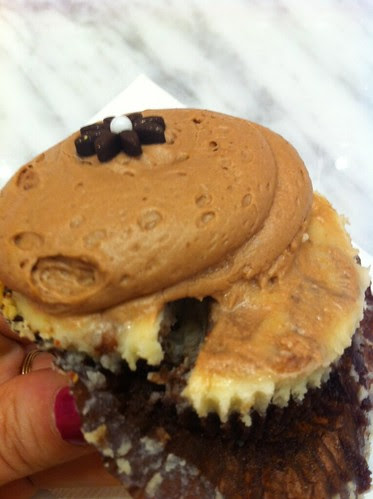 And then it completely fell apart: 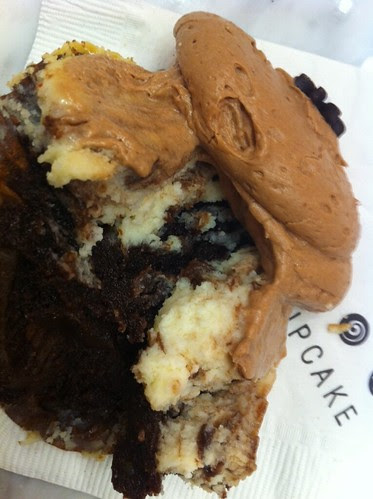 I think it may have been the heat, or just that particular cupcake. The bottom seems to be a cheesecake layer and then a fudge layer and those were wetter and softer than a cake base. I'm generally not a cheesecake lover but I liked the way these flavors tasted, so much so that I ate more than I planned to. The frosting is sweet and chocolate-y but not too much so, and works really well with the bottom. So if you're ever at Georgetown Cupcake on a Tuesday, I do recommend trying this cupcake, perhaps with a fork. Visit georgetowncupcake.com or their Facebook page (where at the top it tells us they are opening in Los Angeles - they already have shops in Washington, DC, Bethesda, NYC and Boston) or @gtowncupcake on Twitter for more information.
bakery reviews cupcake bakeries cupcake flavors fudge Georgetown Cupcake marble fudge brownie new york city SoHo

Tessa said…
These are delicious!! :)