Posted by Cupcake Activist on December 20, 2012
What to know what's torture? Buying cupcakes you can't eat for 1-1/2 days!

But sometimes that's what you gotta do to have cupcakes waiting for you when you need them.

When I was in Arizona last month, I scouted out several cupcake shops to reward myself for finishing an Ironman. That's what I like to do: burn calories so I can eat them. I was excited to find a few cupcake shops within a close distance of our hotel in Scottsdale. One of them being Butter & Me Bakeshop. 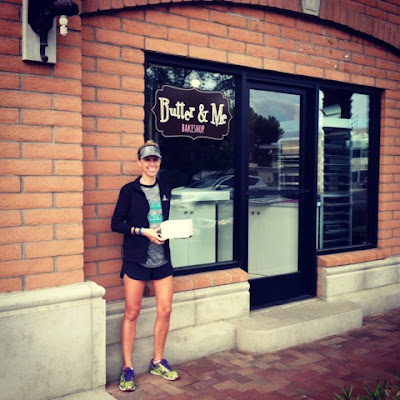 Butter & Me is a new bakery in the Old Town Scottsdale area. When I walked in I felt like I was in the middle of a homey kitchen. I loved the open space with only a countertop to separate the baking from the customers. 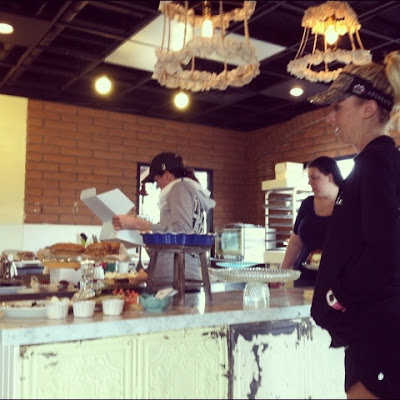 It was the end of the day when I stopped by, so they didn't have a large selection of cupcakes to choose from. I took one of each of the remaining flavors: Gingerbread with cinnamon cream cheese frosting, Blueberry lemon with blueberry compote, and wow, I totally forgot the third flavor (maybe chocolate & vanilla?). I guess that happens when my head is in a completely different place, such as mentally preparing for an Ironman the next day.

I'm not supposed to eat any sugar for a week or so before the race, which is why the tasting had to wait until the next day. BUT I might have taken a small swipe of frosting to get me motivated. Yum...frosting!

Keep in mind that I waited a day to eat these cupcakes. That being said, these cupcakes were a bit dry. The frosting didn't cover the entire top and all exposed areas were dry. I hate when that happens. Bakers just need to add more frosting! And I would definitely vote yes for more frosting because it was my favorite part of the cupcake (it usually is)! All of the frostings were very sweet, something I like on some cupcakes. Other people don't like this, but I think it works in the right situation. I love gingerbread cupcakes and this was my first of the season. The blueberry compote was a bit lacking in the blueberry lemon cupcake.

Overall: I have a positive vibe when I think of Butter & Me Bakeshop. They are new and have some kinks to work out, but I think they are headed in the right direction. I would definitely like to try them again earlier in the day so I can taste fresh cupcakes. I would also like to see what other flavors they offer and what other goodies they make. You should definitely check them out. 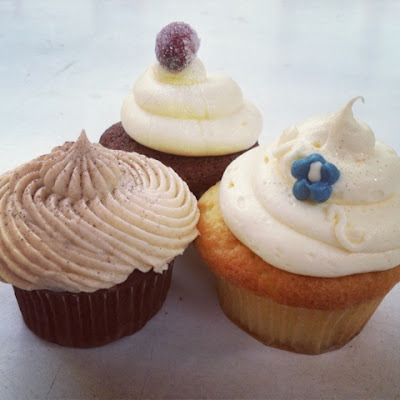