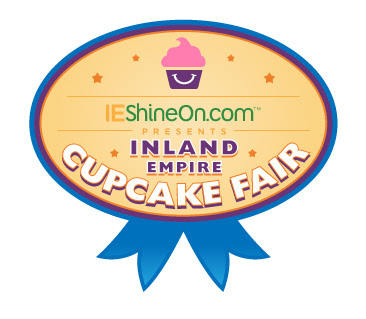 On Sunday I had the pleasure of attending the 1st Annual Inland Empire Cupcake Fair hosted by IEShineOn. The fair was held in Riverside and drew quite a crowd!

Doors opened at 11AM for VIPs and media but when I got there at about 11:30AM the place was already pretty full. There were about thirteen bakers who entered the cupcake contest but only about eight bakers were present at the event handing out samples. We were given six tasting tickets to use so it made choosing what flavors to try a little difficult. If you used all your tasting tickets you were allowed to purchase an additional six for $5. Because the cupcakes were so popular, visitors were buying additional tasting tickets, however this coupled with the crowds the event drew caused a bit of an early cupcake shortage.
I ended up picking cupcakes from Casey's Cupcakes, [desi]gn cakes & cupcakes, Mia's Mini's, Lavish Cupcakery, Kelly's Cupcakes, and The Last Drop Cafe. 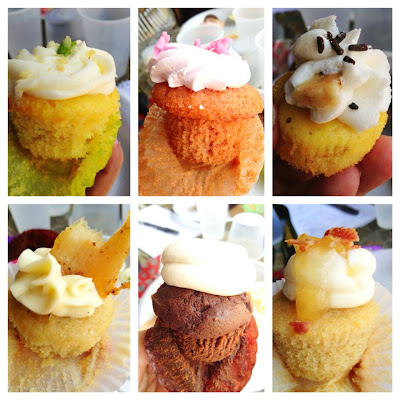 Now let's get to the cupcakes! (In order from Top Left to Right)

Mia's Minis - Jalapeño Popper Cupcake:
These cupcakes smelled spicy! They were a jalapeño cornbread cake topped with cream cheese frosting with some cornbread crumbs and a fresh jalapeño sliver on top. I always love trying savory cupcakes and this was one I'd never seen before! The cornbread cake was delicious! Perfectly crumbly with a bit of heat from the chopped jalapeño bits. The cream cheese frosting wasn't sweet at all, it paired really well with the cake and cooled the heat of the cake. Definitely one of my favorites of the day!

Casey's Cupcakes - Strawberry Cupcake:
This definitely tasted like strawberry, the frosting had the majority of the fresh strawberry taste and I was able to taste a few seeds in it. The cake wasn't as strawberry as I thought it would be, it had more of an aroma than a taste. I wish this would have had more strawberry in it, event just adding some fresh strawberries inside. The cake was fluffy and moist as was the frosting. I wasn't a fan of the pink bits on the top, I'm not sure if it was pink dyed white chocolate or something else but they were a bit waxy and didn't taste great paired with the cupcake.

Lavish Cupcakery - Ba-nana Cupcake:
I was a little bias against this cupcake at first since I'm not a fan of glitter on cupcakes. The cake didn't have a strong banana aroma. It was a banana cake topped with what I think was a whipped cream frosting, a few chocolate sprinkles and a banana chip. The frosting was a little gritty, I wasn't sure if it was from the chocolate sprinkles or just some sugar that didn't get whipped in. The cake itself didn't taste like a traditional banana cake, it tasted more like it was flavored with banana extract instead of fresh bananas. The cake was moist but I wish their samples were as big as regular sized minis.

The Last Drop Cafe - Chicken and Waffles Cupcake:
At first smell this cupcake smelled very peppery which I'm sure was from the chicken. The base was a maple cake that definitely had a full flavor. The frosting wasn't overly sweet at all and paired well with the sweetness of the cake. My biggest gripe with this cupcake was the chicken on top. It was cold, dried out and had a texture similar to jerky. Because there wasn't anything to tie the chicken to the cupcake the flavors just wouldn't mesh. I think it would have worked better if the chicken had been fried (similar to fried chicken and waffles) or even if there had been some maple syrup on top to ease up the dryness of the chicken.

Kelly's Cupcakery - Chocolate Salted Caramel
This cupcake was the largest of all the samples offered at the event. They had a rich caramel flavor and you could taste and feel the salt granules in the frosting. It was a little hard to eat though, I'm pretty sure the cupcakes were chilled prior to the event. The frosting was very stiff and the cake was a bit dry. I'm sure if the cake hadn't been chilled it would have been moist. Chocolate and salted caramel are a pretty popular flavor combo nowadays so the flavors worked well together.

[desi]gn cakes & cupcakes - Apple Bacon Harvest
This was my absolute favorite flavor of the day. Desi's flavors took home Professional Best Overall for her Salted Caramel and Professional Most Unique Ingredient for her Apple Bacon Harvest. The cupcake smelled like a fresh apple pie. The frosting was unique, I had never had brie frosting before! It was like a more subtle cream cheese frosting. The cake had a light maple flavor, was filled with apples and had crispy pancetta atop the brie frosting. The pancetta was crispy, salty, and not greasy. It was a little lighter than bacon. I never thought to pair bacon, apples, cheese and maple syrup but it definitely worked well together to create an incredibly delicious cupcake. The next time Desi makes regular sized Apple Bacon Harvest cupcakes I'll be first in line at her open shop to pick up a bunch to share with friends because they are THAT GOOD.

Besides the cupcake tastings there were vendors downstairs. A spa sponsor was there giving mini massages, which were pretty great! There was a photo booth, a vendor who sold amazing looking cupcake bath bombs, and even an Origami Owl seller. I ended up making myself an Origami Owl locket while I was there.
Overall, I found to be the Inland Empire Cupcake Fair to be pretty fun! The cupcakery owners were very personable and were talking to all the visitors. The vendors had some great stuff and even some cupcake themed products! I hope the event will be held again next year with even more cupcakeries competing!
Casey's Cupcakes cupcake events cupcake fair cupcake reviews cupcakery events IEShineOn Inland Empire review