Why did you start Intoxicake?
As a publicist, I wanted to try my hands out at creating my own brand, and taking the necessary steps to ensure the success of the brand. I identified a gap in the market (a rockstar cupcake that's gushing with adult goodness), paired my love of creamy and decadent desserts and cooking in general, with a zest for impacting mainstream culture in some unforgettable way, and launched Intoxicake NYC.

Did you go to culinary school?

I didn't go to culinary school to launch Intoxicake NYC. Cooking has always been a part of my culture. Having parents from the Caribbean, you can not escape the kitchen, and liquor-infused baked goods are pretty much tightly woven into the cultural fabric of the West indies. So, it was second nature to marry a simple American dessert concept (the cupcake) with a more complicated system of exotic flavors, influences and styles, that arise from my family's international background. 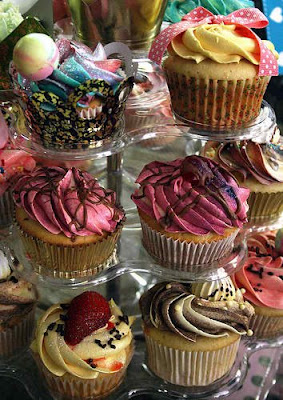 Do you think alcohol/cocktail inspired cupcakes are a new trend?
I think adult-friendly cupcakes are a new trend...but the foundation from which this trend germinates, is definitely a relic of generational influence. Alcohol was used as a simple preservative for baked goods. The alcoholic flavor was a pleasant by-product of an attempt to keep cakes, puffs and other pastries from spoiling - and it worked!

Where can we find your cupcakes?
Intoxicake NYC is an online cupcake company located at intoxicakenyc.com or a simple "Intoxicake NYC" Google search. We deliver cupcakes to our local NYC community, as well as nationwide! Thank heavens for UPS, everyone in America can savor our desserts.

What is your opinion of red velvet cake?
Red Velvet is such a culturally saturated flavor in America. I haven't come across a cupcake company yet that does not afford a Red Velvet dessert option to its customers, Intoxicake NYC included- quite frankly, it's in demand. I'm actually a fan of it, but I also think the masses are ready for the next phase of red velvet - it's time to elevate the concept and that's exactly what we've grasped at Intoxicake NYC. Our flavor that launches on Memorial Day, "Kissed Cake," is a perfect repurposing of Red Velvet.
boozy cupcakes cupcake interview intoxicake