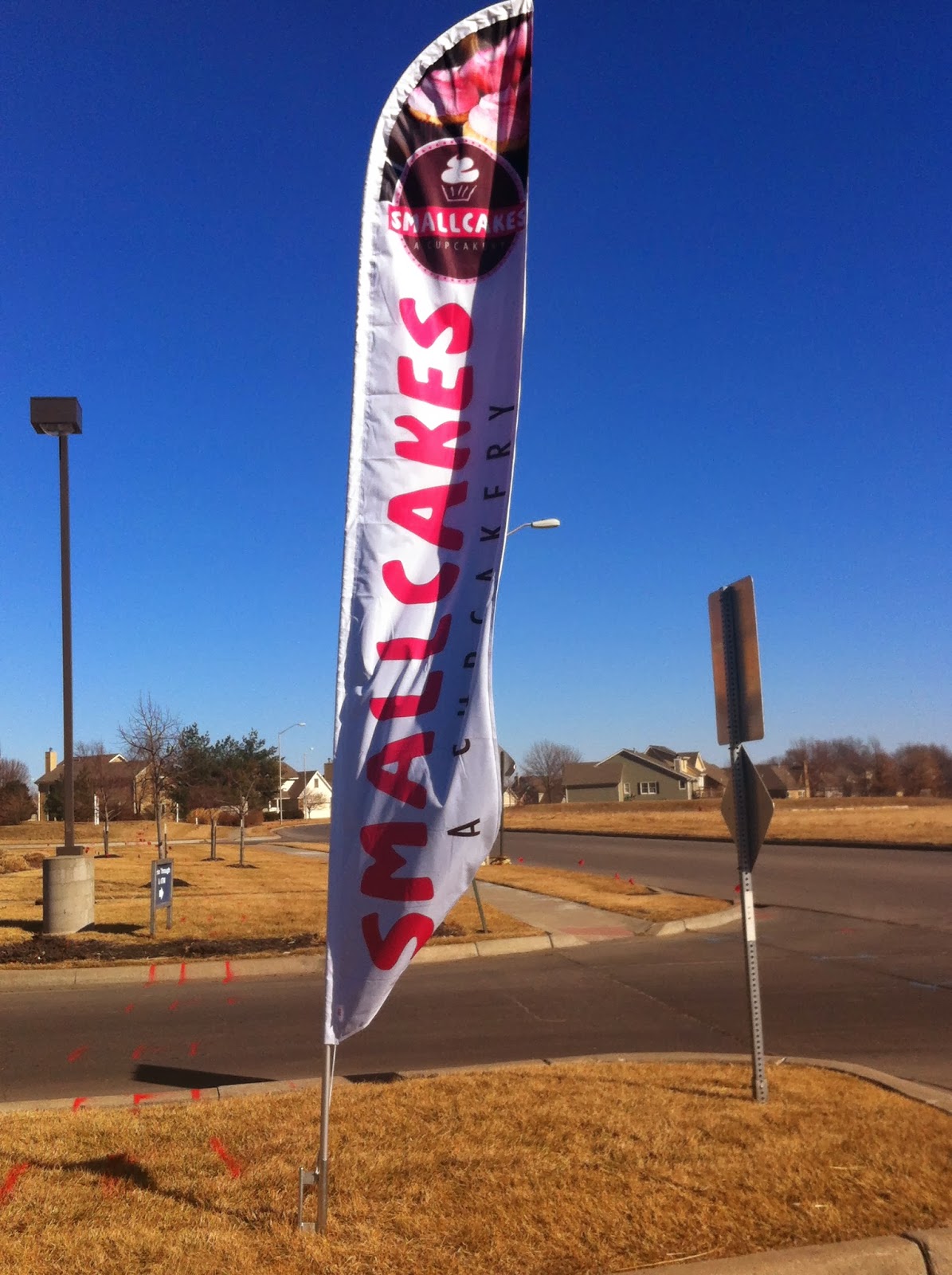 The long-awaited Liberty branch of Smallcakes, the national chain based here in Kansas City, finally opened its doors on Monday, January 20, without much fanfare.  A September article in the KC Star announced this newest branch would open in October 2013, but there was no sign or reason given for the delay when I visited yesterday.  It's located behind the Quik Trip just off I-35 on the north end of town. 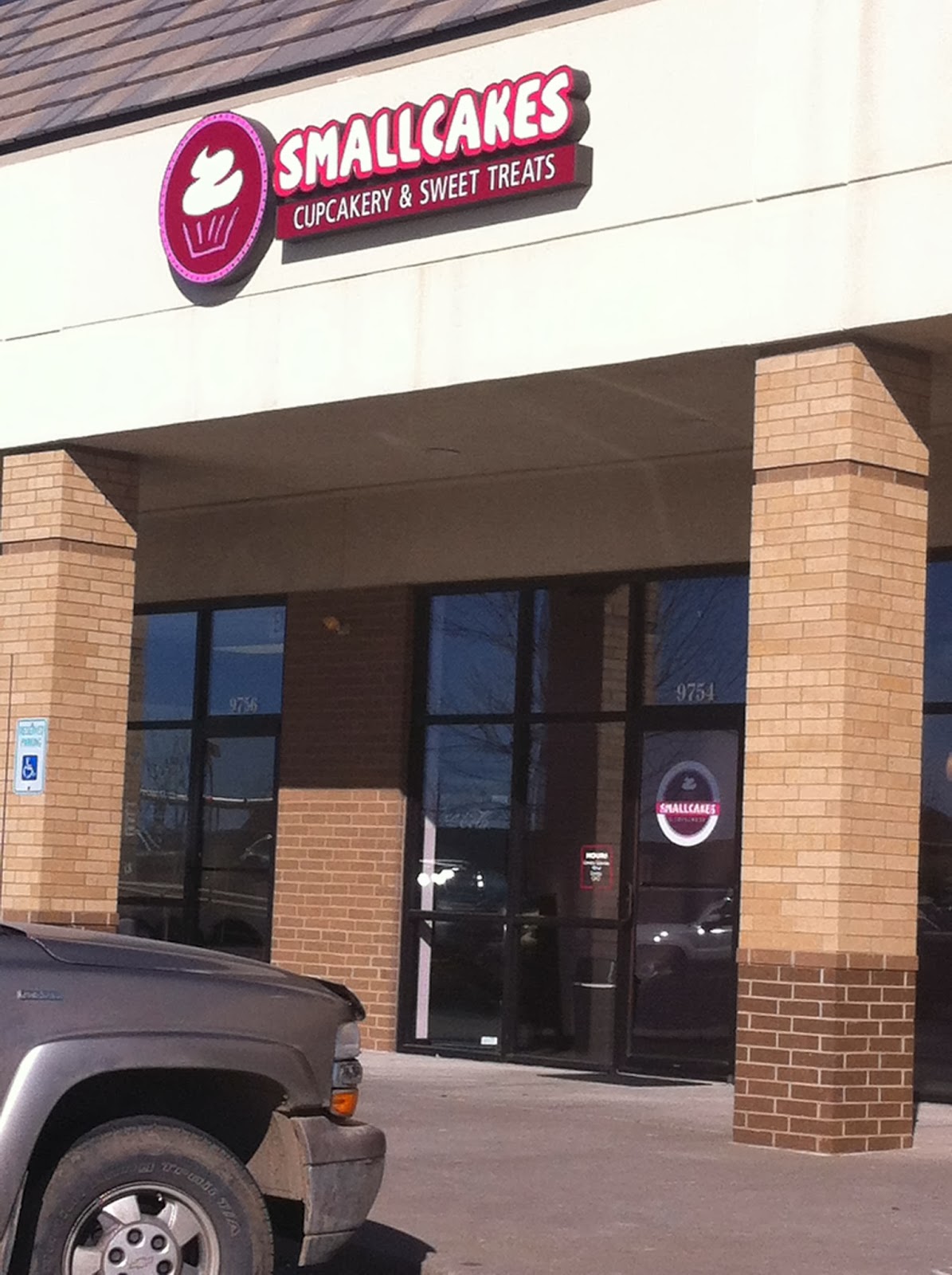 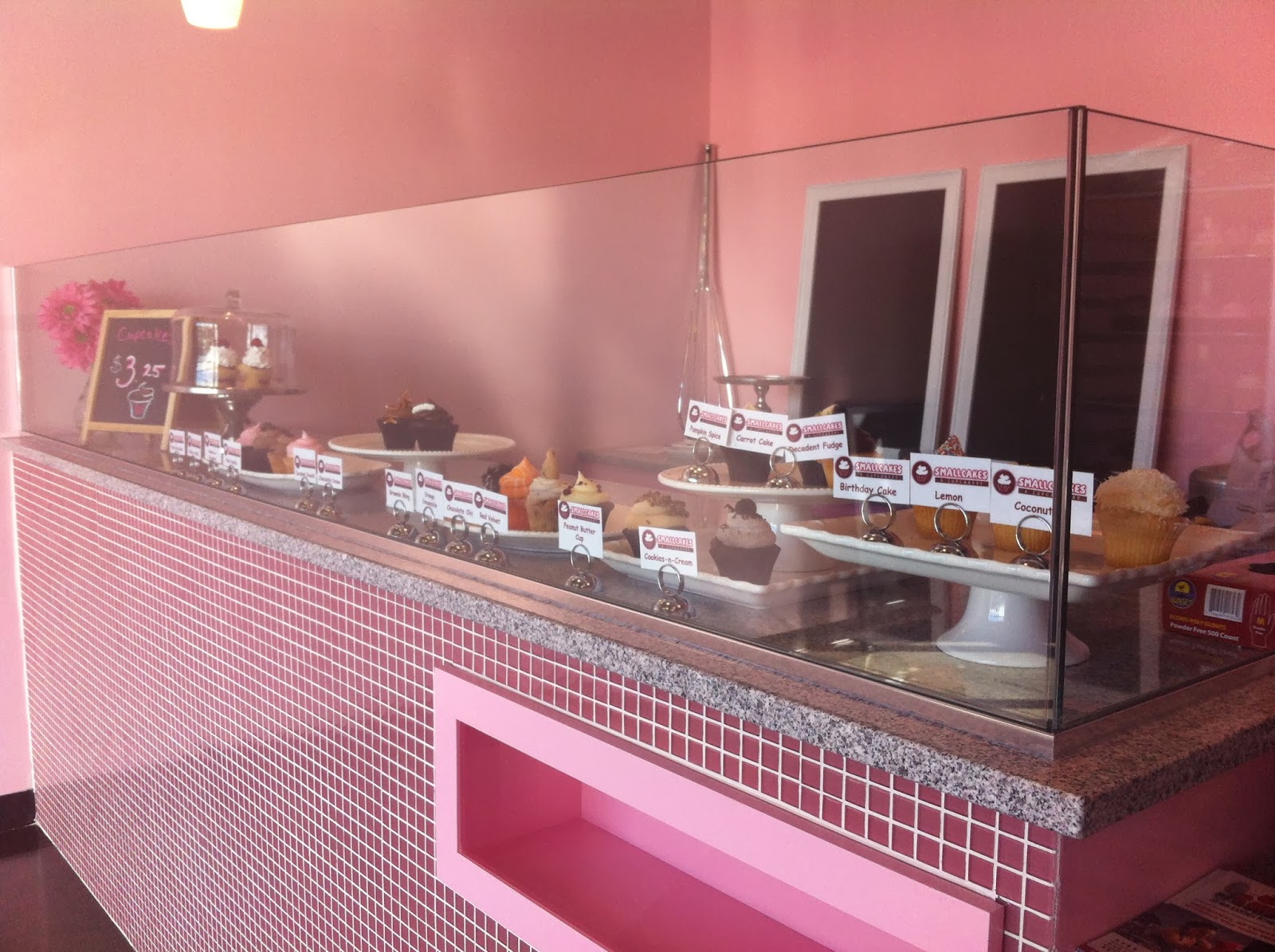 I have visited both KS locations in the Kansas City area and though I usually enjoy the initial taste of Smallcakes cupcakes, about 20 minutes later, I always feel like I have a rock in my stomach (I just call 'em like I see 'em, people), so I haven't tried them in awhile, but I put my stomach where my mouth is again for the sake of the blog! 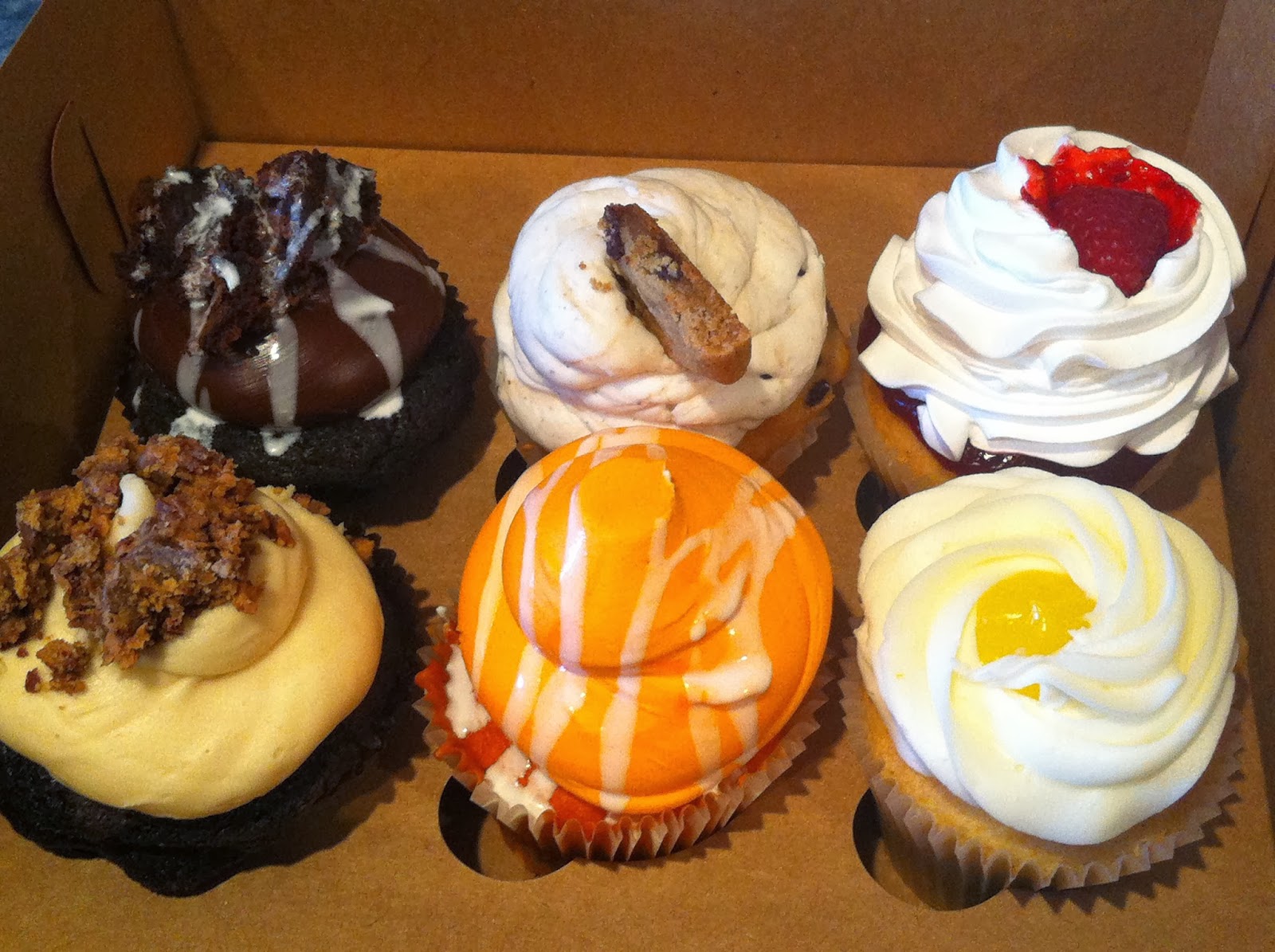 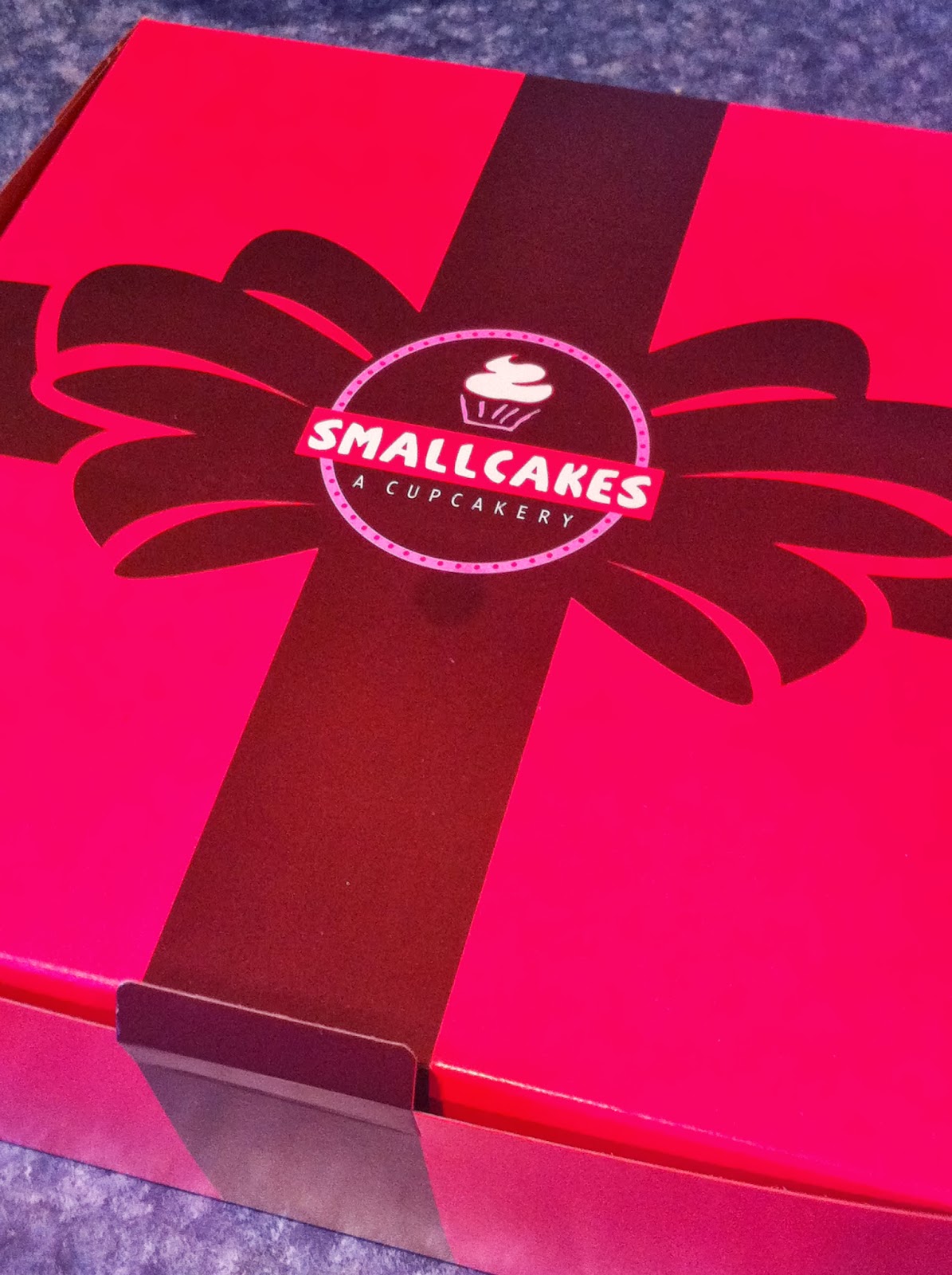 The cupcakes are always beautiful and nicely packaged, as you can see above, and the cakes light and moist, but that's where my enjoyment ceased again.  The icings were all grainy and heavy, except the whipped cream, which was tasteless and greasy.  The lemon cake had no lemon flavor except in the curd, which I did like.  The chocolate cookie cupcake was too salty overall, and the peanut butter frosting had only an aftertaste of peanut butter, with an initial taste of a tangy shortening. I did like the brownie crumbled on top of the brownie cupcake, but the chocolate icing, which I'm sure is supposed to invoke thoughts of fudge, actually has more of an artificial, sticky, rubbery texture.  Because of the striking color, I had to select the Dreamsicle cupcake, but the artificial color didn't bode well.  In the end, the flavor was there, but it was too artificial to enjoy.  The same flavors can be achieved with actual orange juice/zest - I've seen it done well.

Yes, I have a pit in my stomach again.

All I can say is that franchising can have an effect on the quality as you are forced to mass produce and train many widely strewn people in how to make your cupcakes, but as I said, I did go when there were just two of them as well.  If your stomach is stronger than mine, or you enjoy feeling overly full because of its indulgent quality, Smallcakes does have the ability to satisfy your tastebuds and that "special treat" quality of a stop just to get a gourmet cupcake.  It's definitely better than having no cupcake options in the Liberty area since 3 Girls Cupcakes sold to The Sweet Tooth, but you can still get their cupcakes nearby about once a week as well, when they're parked just on the other side of Price Chopper from Smallcakes' new location.

They plan an official Grand Opening in February, with the usual face-painting style pomp and circumstance that original owner of Smallcakes, Jeff Martin, spends his time doing all over the country nowadays.  No official website or Facebook page for the Liberty location yet, but you can find the general information at the Smallcakes site.

Anonymous said…
All I can say is that franchising can have an effect on the quality as you are forced to mass produce and train many widely strewn people in how to make your cupcakes.