Posted by Unknown on January 08, 2014
﻿
Baby Cakes, located in the River Market area of Kansas City, was the city's very first bakery dedicated to cupcakes, opening in 2006, somewhat late in the Cupcake Explosion.  As such, it remains the go-to cupcakery for many in the area.  While other cupcakeries have come and gone with some pomp and circumstance, Baby Cakes has been happy to remain true to its humble beginnings in perhaps the tiniest bakery I have ever seen.  That said, my experiences here over the years have been inconsistent at best.  For my most recent visit, however, I was delighted in several ways:  1) They had multiple seasonal flavors available. 2) They had holiday decorated cupcakes readily available to me in the display case, not just by special order. 3) They were running a special, "buy 6 get 3 free" promotion.  Those three things in combination literally made me squeal with joy. 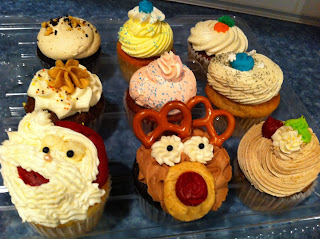 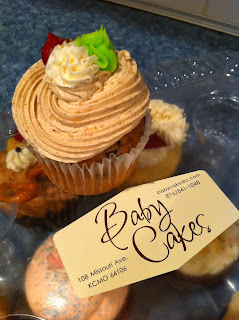 Fruit Cake
Now on to the actual cupcakes: The Eggnog frosting was too strong to endure, but so is the drink, so maybe that's actually kudos.  The Carrot and Pumpkin cake and Peanut Butter frosting were upsettingly salty, but overall the frostings were light and the cakes were as well.  The Lemon and Strawberry cupcakes were the most pleasant/edible of the bunch, but let me get to the fruit cake - I truly admire the attempt, but it was predictably too chunky, salty, and gingery to earn any culinary praise, but it was not hard as a rock like the original, so that's probably a good variation from the classic recipe. In the end, the Vanilla Vanilla was the only truly yummy cupcake and that seems to be true every time I go.  So for those of us who like to use plain Vanilla as our measuring stick, may that be a lesson to us.  In this case, it is misleading as a typical indicator. 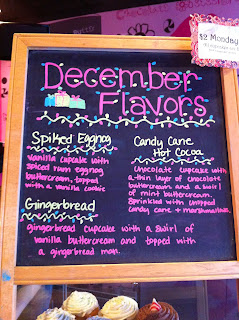 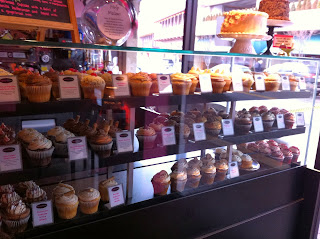 Cupcake A La Mode's lovely display and flavor board. 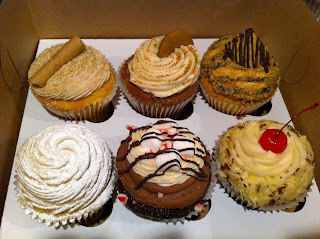 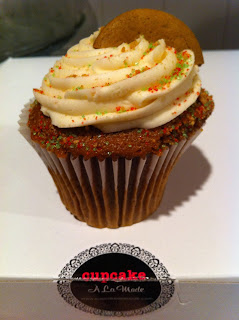 
In the case of Cupcake A La Mode, (I picked these up from the Plaza, not the Park Place location), the Spiced Eggnog was not as overpowering, despite the addition of alcohol and actually very good in combination with their ever-wondrous cake.  The Gingerbread was full of refreshing, bright flavors for the season as opposed to the typical spice or pumpkin cakes.  The S'mores (with special vanilla base variation) still packed plenty of chocolate punch.  In fact, if I still owned my cupcakery, I would now try a vanilla version myself! The Candy Cane Hot Cocoa was filled with subtle peppermint flavor throughout the concoction, but nothing too strong.  So in a repeat performance from November, it looks like Cupcake A La Mode wins another flavor smackdown.  (my only sidenote would be that having holiday decorations available in the case rather than just by special order would be a nice treat once in awhile, though as a former business owner, I understand the financial trade-offs all too well). 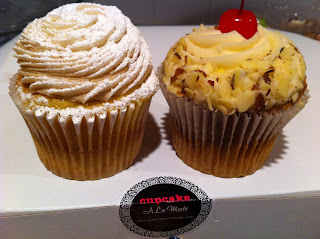 Stuffed French Toast & Amaretto Sweet
I can't let this occasion pass without obsessing on my two A La Mode faves, Stuffed French Toast & Amaretto Sweet - what can I say? Their cupcakes and eateries are always beautiful, with consistent cupcakes, never old or dry, and with a specialty atmosphere and friendly service. I'm actually glad they're so far from me.  They were also collecting for a Malawi clinic when I visited, but they participate in lots of local charity events, which is where we originally crossed paths.  There's even one now one in Roseville, California, my old stomping grounds.  It's like they're stalking me (though it's quite the opposite!). Bonus:  A little bird tells me they might be selling their icing soon.
amaretto Babycakes Christmas Cupcake a La Mode eggnog French Toast fruitcake gingerbread holidays hot cocoa Kansas City

Misty said…
Amaretto Sweet is my favorite from Cupcake A La Mode. I have also been mostly dissapointed in Babycakes.